On Wednesday 21st January, seven activists from the campaign Stop Huntingdon Animal Cruelty (SHAC) were sentenced to a total of fifty years in prison, after they were found guilty in December 2008 of 'conspiracy to blackmail' Huntingdon Life Sciences (HLS). Heather Nicholson was jailed for 11 years, Gregg and Natasha Avery sentenced to nine years each, Gavin Medd-Hall an eight-year prison sentence, Daniel Wadham jailed for five years, Dan Amos and another were both sentenced to four years in prison.

"They conspired to do A B and C ... with Persons or Persons Unknown." - Who were persons unknown? It really didn't matter, as the above conspiracy law linked the individuals even though they had never met them or talked to them. However, this was all ignored as the media falsely charged the activists with hypocrisy, extremism and terrorism, instead of acknowledging their own hypocritical standpoint, best portrayed by the Telegraph, with NETCU helping to further the hysteria following the activists guilty verdicts.

This secured no opportunity for discussing the reasons the activists faced jail in the first place, because they opposed the fradulant and abusive vivisection industry, instead promoting alternative, reliable research methods. So between the 19th and 22nd, there were solidarity actions in Europe; Gothenburg (Sweden), Vienna (Austria), Hamburg (Germany), Moscow (Russia), and in the UK; London, Luton, Birmingham, Southampton [1 | 2], and at HLS sites, suppliers, Harlan and Sequani labs in three days of action. The protests were in support of the UK SHAC 7, with Russian activists also acting in support of the SHAC 7 in the USA; six activists who had similar charges bought against them in 2006 under the Animal Enterprise Protection Act, who were found guilty and sentenced to 23 years in prison.

Send letters of support to:

It is currently not known if the 7th defendant wishes to receive prisoner support or not.

Stop Huntingdon Animal Cruelty (SHAC) was set with the sole aim of closing HLS down. The campaign was set up at the end of 1999 by a group of activists who had successfully closed down Consort kennels and Hillgrove cat farm. Both campaigns ended with the businesses closing down and hundreds of animals being safely rehomed instead of tortured in labs.

HLS' key weakness is their finances and by throwing the spotlight on those funding their abuse campaigners across the globe have managed to bring HLS to the brink of financial collapse. Throughout the campaign activists have made financial history as one by one major corporations have yielded to protester power and severed their links with the failing company.

Campaigners use evidence obtained in five undercover investigations at their different laboratories in the UK and USA where HLS workers have been caught on film punching puppies in the face, simulating sex with animals in their care, cutting open primates while they are still alive and falsifying experiments to get products on the market. HLS workers have even been caught drunk at work and dealing drugs at the labs.

Huntingdon Life Sciences have a criminal record from a British court of law for breaking the Companies' Act. They are the only UK laboratory to ever have their licence revoked by the government.

Please organise a demo in your country. For your nearest Bayer click here

Electronic Sit In (ECD) against HLS's auditors RMSBG and Bayer

Check the link below for latest ECD updates, or

WHERE? >> Bank of England, London

Nearest tube: Bank. The protest will meet here and proceed to march through the financial districts of London, finishing at the New York Stock Exchange.

WHY? >> We have reached a critical time. HLS' financials are wobbling dangerously close to the edge and enough persuasion to key financial institutions could be enough to close them. Click here for more information about the financial aspects of the campaign.

WHAT WILL HAPPEN? >> We will be meeting at the Bank of England, central London, on Friday 27th February at 12 noon. From this point we will have a brief speech, before moving off together.

The day will all be about focusing on HLS' key financial supporters. We will be conducting demonstrations against several targets that are either major shareholders or are listing HLS, enabling them to stay open. The demonstrations will of course be entirely legal, as the entire day as been organised with the help of the police. Once we have finished the demonstrations, we will return in a loop back to the Bank of England where we started. Any further questions, don't hesistate to contact us on

Transport is being arranged from across the country, so if you don't want to make your own way there, get in touch and we can help you find a minibus or shared car from your area.

This week of action will focus entirely on HLS' financials - Shareholders, and the NYSE who are the only stock exchange in the world allowing HLS (LSR) to trade shares.

Part of the Global Week of Action in February includes:

Please organise a demo in your country. For your nearest financial HLS collaborator click here: 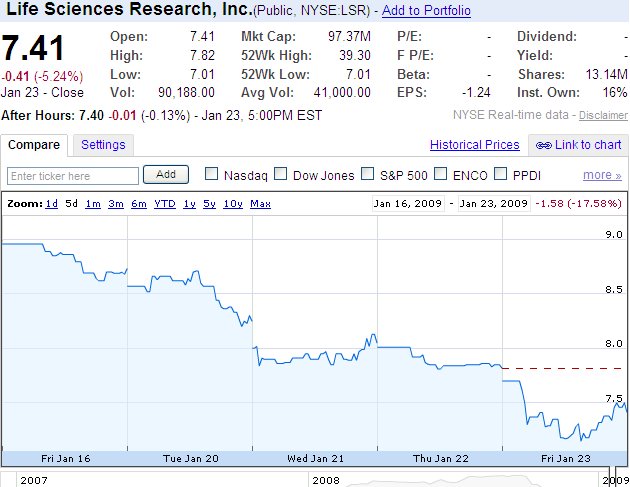 Despite locking up 7 activists from SHAC uk for 50 years two days ago, HLS' share price returns to free fall. It took two months, but the value of vivisection is yet again dropping. It will most likely continue to do so in the following weeks, months and years to come... solidarity for the new SHAC 7!

On Wednesday 21st January 2009 the police’s National Extremism Tactical Coordination Unit issued a press release celebrating the jailing of seven animal rights campaigners for “over fifty years”. In their press release NETCU are at pains to point out that the sentences have “nothing to do with freedom of expression” and that those jailed are “extremists”.

NETCU, a shady, unaccountable branch of the UK’s expanding political police, have thrown the weight of their press department behind a campaign to present the seven defendants, all active in the Stop Huntingdon Animal Cruelty (SHAC) campaign, as extremists. The mainstream media has swallowed NETCU’s spin unquestioningly without seeing the affair for what it is – a political trial with serious ramifications for the right of individuals to voice their dissent against corporate power.

On December 23rd, 4 out of 5 activists on trial at Winchester Crown Court were found guilty of 'Conspiracy to Blackmail' at Winchester Crown Court after a 3 and a half month long trial. Natasha and Greg Avery and Dan Amos had plead guilty during Summer 2008. During the trial much had been made about how each defendant fitted in to what the prosecution described as the ‘hierarchy’ of the SHAC campaign. At the three day long sentencing in January, Judge Butterfield sentenced the defendants according to how he saw them in this ‘hierarchy', not according to the evidence against them. Accordingly Greg and Natasha Avery were given the heaviest sentences possible, but were given credit for their guilty pleas and were sentenced to serve nine years each. Heather Nicholson, who plead not-guilty, received the longest actual sentence, eleven years. Gavin Medd Hall was sentenced to eight years, Daniel Wadham got five years, and Daniel Amos and Gerrah Selby were each sentenced to four years.

One thing that was not reported at all by the mainstream media was the imposition of indefinite anti social behaviour orders (ASBOs) on four of the defendants preventing them from protesting against animal experimentation. These ASBOs make otherwise lawful protest activity into a crime, punishable by up to five years in prison. The use of indefinite ASBOs against protesters is, as far as Corporate Watch knows, a completely new development. The terms of the orders could prevent these four people, all dedicated campaigners against vivisection, from ever voicing their political views again. The orders could even be interpreted as preventing the defendants from speaking or writing against vivisection.

By giving the maximum possible sentences, the Judge was effectively saying that this case represented the most serious form of blackmail. However, the allegations against those convicted would not fit in at all with a layman’s definition of blackmail

As Corporate Watch wrote last month, the charges related to over four years of concerted campaigning against Huntingdon Life Sciences (HLS). The essence of the blackmail charge is that SHAC called for companies to cease trading with HLS and wrote polite letters to that effect. SHAC also encouraged their supporters to write to and protest against companies working with HLS. In some cases, direct action occurred, but this was never called for by SHAC. Letters were sent to company employees falsely accusing them of paedophilia, threats were received in the post and cars were paintstrippered. Evidence was presented that suggested that some of the defendants may have had knowledge of, or been involved in, some of these activities. However, many defendants were convicted because of what they said on demonstrations against HLS and their suppliers or because of the length of their involvement with SHAC.

Let us look at the case of Heather Nicholson, the defendant who received the most severe sentence, eleven years. Heather is a committed, long-term campaigner for animal rights and had been involved with SHAC since the beginning. She had lived and worked at the SHAC office and been involved with communicating, politely, with companies doing business with HLS. Only the most tenuous of circumstantial evidence linked Heather to any of the activities parroted in the press as attributed to her. Heather was convicted because of her long involvement with SHAC and given the most severe sentence because of Judge Butterfield’s perception of her importance to the campaign.

In the case of the defendants who were newer to SHAC, their convictions stemmed largely from words spoken on demonstrations. These convictions are extremely worrying as threatening words should normally be dealt with, at most, by charges under the Public Order Act. Again, the catch-all charge of ‘conspiracy to blackmail’ meant that the defendants could be dealt with more severely because of their association with others.

Judge Butterfield was not content with the harsh sentence doled out to the SHAC 7. In his sentencing he invited the Department of Public Prosecutions to consider “indefinite detention” in blackmail cases. Surely Judge Butterfield had seen the potential for the state to use this charge in the future as a bludgeon to silence political dissent.

Despite the repression of the SHAC 7, resistance against HLS, Europe’s biggest animal testing laboratory, continues. Protests against financiers of HLS, and in solidarity with the SHAC 7, have taken place across the UK, Europe and the US while a protest against the Bank of England, who have provided HLS with banking facilities since their regular bankers dropped them, is planned for 27th February. (see www.shac.net)

For more on the state repression of anti-corporate dissent see:

Whose Agenda do Reports of Eco-Terrorism Serve -