Oaxaca Uprising Continues as the Zapatista Other Campaign Ends

"We are on the eve of either a great uprising or a civil war," the EZLN's Delegate Zero stated recently, referring to the current situation in Oaxaca in southern Mexico. Whilst the 45,000km-long Other Campaign tour around "the forgotten corners of Mexico", which the Zapatistas started on 1 January, 2006, ends in Mexico City, the repression in Oaxaca is worsening by the day. And this is why the Zapatista Army of National Liberation (EZLN) is now calling for a global wave of active solidarity with the people of Oaxaca, to culminate with a "worldwide day of action" on 22 December to "say and to demonstrate that the people of Oaxaca are not alone" [Full communique | Words from Delegate Zero | APPO's response]. Closer to home, the Network of UK Zapatista Solidarity Groups called for a national week of solidarity actions from the 9 to the 17 of December, 2006.

Meanwhile, the popular uprising continues in and around Oaxaca city, and so do the illegal detentions of the so-called 'leaders' of the Popular Assembly of the Peoples of Oaxaca (APPO), which have increased in the last few days, forcing many people into hiding. APPO is a grassroots movement organising for popular democracy, and it is currently at the centre of the Mexican government's latest wave of repression, which has already resulted in mass illegal arrests of more than 500 people [Flavio Sosa's arrest | more | Interview] and the 'disappearance' of up to 100 people [APPO Communique | APPO activist interview | Eyewitness report].

At the same time, there is also a concerted effort by the Mexican government to try to silence any independent media that is reporting the truth on what is happening in Oaxaca. Following the murder of Indymedia videographer Bradley Will, who was shot dead by paramilitaries whilst documenting an APPO barricade on the 25th of October, the attacks against international and national independent media have continued. Two documentary filmmakers and a translator were illegally detained on 3 December while they were eating at a restaurant in Oaxacxa city centre.

Oscar Beard is an independent journalist from London currently travelling in the southern estates of Mexico. He has regularly contributed text, video and photo reports to the Indymedia newswire. See a list of his reports from Mexico. 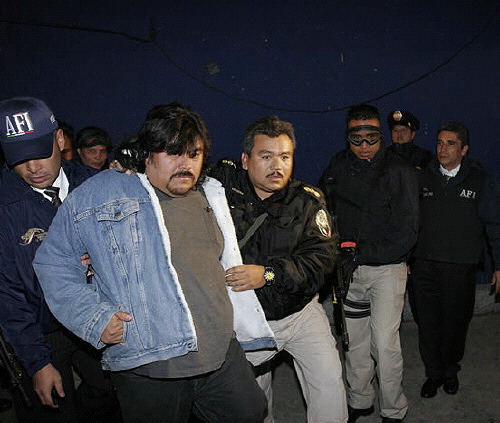 Amnesty International has launched a web action targetting the Mexican President and Minister of the Interior calling for an end to human rights abuses in Oaxaca, including the continued detention of 95 alleged protestrs despite numerous violations of the rights of detainees. Take action here:

Edinburgh Chiapas Solidarity Group held a solidarity protest on the east end of Princes Street on Saturday 16th as part of the the network of UK Zapatista solidarity group national week of action, awareness raising, protest and fundraising in support of the people's struggle in Oaxaca, Mexico.

For photos and report click at the link below:

A London solidarity group projected a film show on the front of the National Gallery in Trafalgar Square and distributed information leaflets about the deteriorating situation in Oaxaca, Mexico.

We are all Oaxaca!