Evening: A party on the circle line was announced, 200 people at "Beyond ESF", including Yomango, people from the nordic anti-capitalist network and a samba-band, decided to participate. A group got caught up at Victoria where arrests were threatened. Since confirmed two arrested, they have both been released after 20 hours of detention, no charges, both had dna and fingerprints taken.

Afternoon London Critical Mass and Rising Tide gathers with the theme London Underwater visting the G8 Climate Criminals including Exxon Mobil and BP. Joined by Samba Band the protesters succeded in moving around the streets of the capital slowing and stopping traffic [ first pics ] Reports and pics [ 1 | 2 | 3 ]

Evening a smaller critical mass went out in the rain without police escort in the evening. It ended up at the Indymedia centre. [ Report ]

Afternoon Insurrectionary laboratorists did five actions today: visiting 10 Starbucks Cafes in the City of London; an un-reality cc-tv action; in a big supermarket chain in Whitechapel yomango was "doing a yomango" together with planka; some subvertising; finally at the millenium bridge tourists were asked to prove their tourist status. [ Full report on Newswire | CCTV action report and pictures ]

Although the owners of Canary Wharf had an injunction to try and prevent the demonstration for a decent deal for its cleaners neither the issue no the protest went way. "Canary Wharf is home to some of the most successful and powerful banks in the world. But it is content to let its contract cleaners be paid poverty wages, no sick pay, 15 days holiday and no pension". [ Report and Pictures ]

Morning started with “From Genoa to Guantanamo” with speakers including a recent ex-detainee from Guantanamo Bay. [ Newswire | Audio ]

This afternoon will include presentations about Infowar, the indymedia server seizure and the media circus.

In the Camden Centre in the evening No Vox organised a night of politics, music and dancing.

At Beyond ESF sessions included Grassroots movements against the Clash of Civilisations; solidarity with South and Latin American: [Caracoles, Zapatismo and the Piqueteros at Beyond ESF]; in a small room about 40 people crammed in to share experiences of social centres across Europe: [Swapping lives at Beyond ESF]; and then it was the G8 in Scotland...

In Alexandra Palace topics for sessions included ending the occupation of Iraq. One meeting to be addressed by general secretary of the Iraqi Federation of Trade Unions being disrupted. [Report] and "In the name of democracy...". 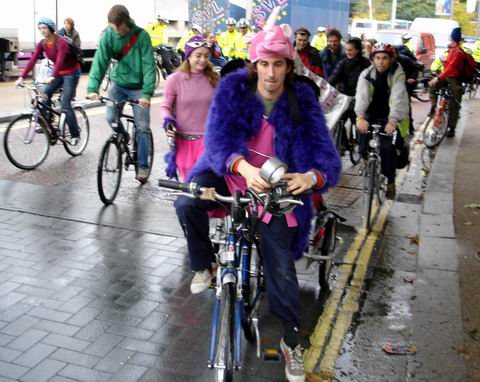