In the largest procedure of its kind in the world, the UK government wanted to make sure that the introduction of GM crops in the UK would be based on scientific facts and public approval. For a change it seems to have been good that they have done so. It is now obvious that the public are against GM food and GM crops, and the trials showed that herbicide tolerant GM crops can be worse for the environment than conventional agriculture.

Public meetings were held all over the country, a website gave the opportunity to state one's opinion, a scientific commission wrote a report, and farm-scale field trials where conducted over several years. All of these results are now going into a final report (overview). Besides this official programme numerous actions took place. Meanwhile some GM companies have decided to reduce their activites in the UK. 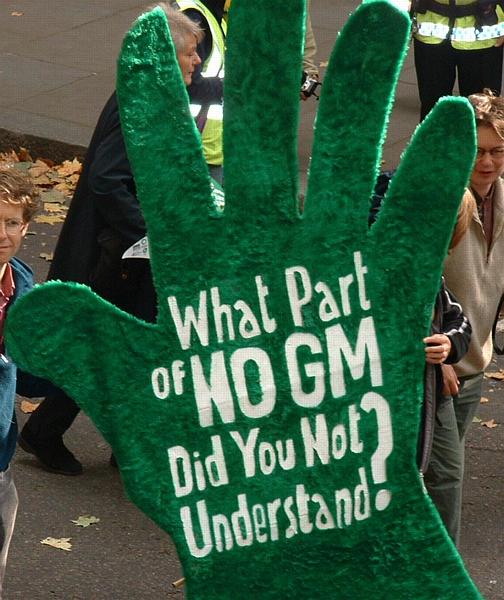 What part of no GM did you not understand?

All in all the outcome is quite simple:

Unknown to most people there has for six weeks been a series of public debates up and down the country under the title "GM nation?" about whether the government should allow the commericalisation of GM crops in the UK.

made for Indymedia, people from all over the country reveal that the public consultation was a poorly advertised, ill concieved and mismanaged farce that failed to engage ordinary people. The film also demonstrates that much of the public believes that the decision has already been made to push ahead with GM (regardless of the will of the people) and that the government has been undemocratically manipulated by U.S. interests and big business.

Still, many more people showed up at the debates then ever expected so that addtional meetings had to be organised, and in the end the overwhelming majority of those that voiced their opinion were clearly against GM crops and food.

Parallel to the public debate and the field trials, a scientific report is being written, and its first version has been published. There were only two critical scientists on the scientific panel, but one of them resigned because he feared his academic funding might be withdrawn if he continued to raise objections to GM foods. Some of Britain's most senior scientists are now being investigated in an inquiry to discover whether opponents of genetically modified food in the commission have been bullied to soften their stance.

The scientific findings of the farm-scale field trials with herbicide-resistant crops showed worse environmental impacts for rape seed/canola and for sugar beet when compared to conventional agriculture. These varieties might therefore face a Europe wide ban. The results for GM maize has to be followed up, because even though GM maize scored a bit better then conventional maize, the conventional maize was treated with a herbicide that is so strong that it is already forbidden in parts of Europe. The control group is therefore not representative for "normal" agriculture anymore. There was no comparison with the environmental impacts of organic farming. EU commissioners have already stated that they would find the results sufficient to not give approval to the crops in question.

From 1999 to 2003, 283 field trials took place with 5 different GM crops including: spring and winter rape tolerant to glufosinate (Liberty, Bayer), glufosinate tolerant maize (Liberty, Bayer) and sugar and fodder beet tolerant to glyphosate (Roundup, Monsanto). The trials cost about 5.5 million pounds. Each field was divided into two, half sown with the GM crop and half with its conventional equivalent. Farmers were allowed to treat the crops as they would normally do. (Complete text of the scientific articles)

| 3) or squatted so that the seed could not be planted in time.

The trial against the squatters of the Pink Castle is still going on. (1

During the early hours of Sunday morning, 29 June, almost sixty members of the public broke into the grounds of GM giant Syngenta's reasearch station

at Jealott's Hill near Bracknell, Berkshire. They pulled up a 600 square meter research plot of experimental wheat.

Smaller actions and demonstrations took place throughout the country. (1 | 2)

At the publication of the results of the public debates in September 2003, the Green Gloves Pledge, a pledge to peacefully remove GM crops or support those who do, was formally announced with the delivery of a six and half foot green glove to Tony Blair at the gates of Downing Street bearing the question "Which part of No GM do you not understand?".

took place from Inverness (Scotland) and other places to London. (map) (1 | 2 | 3 | 4) to join the trollies and tractor demonstration

Others came by foot on a pilgrimage visiting Monsanto and Bayer on the way.

The cost of attacks against genetically modified crop trials emerged this week as more British plant scientists left the country to pursue their work abroad. 28 incidents of vandalism at basic plant research trials were reported between Jan 1999 and April 2003. While some see this as a brain drain, others see it as a chance for research institutes to concentrate on more sustainable Research and Development (R&D).

Bayer CropScience - previously known as Aventis - has announced that they now intend to stop testing crops in this country. Less than 2 months ago anti-GM activists at the Earth First Summer gathering decided to target the company Bayer Crop Science. In a victory for accountability, the Environment Secretary had decided that the right of the public to know where GM fields trials are, weighs stronger than the interest of a company to keep them secret to avoid actions. However BayerCropSciences has not said that it will stop all GM R&D, so protests are going to continue

Just a day before the publication of the scientific reports of the UK field trials, Monsanto, the world's largest GM seed company, pulled out of the European cereal business, closing their research centre in Cambridge. The decision follows the failure to introduce genetically modified hybrid wheat to Europe, and the company has decided to cut costs.

Some insurance companies are refusing to cover farmers against the unforeseen dangers of growing genetically modified crops. They are not prepared to carry the risk of huge payouts linked to possible health risks and the contamination of neighbouring farms. They have even compared GM crops to Thalidomide, asbestos and acts of terrorism in terms of the potential claims. Others, like Allianz Insurance, (principle shareholders in Bayer AG) still need to be warned by protestors that "in the current climate, investing in biotech companies is economically unviable".