Over 10,000 climate campaigners took to the streets to take part in marches in London and Glasgow over the weekend, despite pouring rain. Protesters braved the weather in one the biggest demonstrations calling for climate justice the UK has ever seen. The marches coincided with the wheeling and dealing at the 2007 United Nations Climate Change Conference, currently taking place in Bali, Indonesia. Protests calling upon the world leaders for action on climate change have taken place across the world. The last week has seen many actions across the UK on various aspects of the climate change agenda. 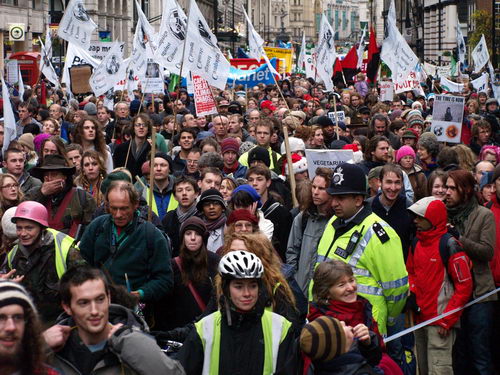 In London, activists from Plane Stupid shut down travel agents and airline offices on the route of the climate march. A spokesperson for the group said: "The government’s collusion with BAA over the Heathrow consultation on the third runway concretes over public debate and irresponsibly ignores climate warnings from the UN Inter-governmental Panel on Climate Change." Around the same time 3 protestors who arrived to set up a peaceful protest against Tesco’s investments into biofuels were manhandled by Police who forced them into a metal pen. Despite this, a peaceful protest was held for an hour including a stop by 300 cyclists and 1 minute silence for those who are suffering or who have died as the result of massive expansion of large scale biofuel plantations across the South. In Nottingham, campaigners organising the annual East Midlands Vegan Festival pointed out that a massive proportion of climate change is caused by livestock farming and the production of meat/dairy products. They urged leaders in Bali "to take the urgent action needed to prevent the catastrophic destabilisation of global climate". See photo report and listen to the audio. In Manchester activists organised a week of 'climate campaigns'. Billboards were subvertised, banners dropped from bridges and flight centres and Hummer dealership targetted.

In the previous week, a group of about 20 women blockaded the Department for Transport in London by locking and glueing themselves to the entrance doors. They prevented staff from getting to work and as they said: "carrying out their policies which are catapulting us towards dangerous run-away climate change". The action came in response to Transport Secretary Ruth Kelly confirming the government's intentions to build a third runway and a sixth terminal at Heathrow and co-incides with the opening of their first 'consultation' exhibition. The blockade lasted for over two hours, eight women who were arrested, held all day in Belgravia Police Station and then released on bail. They have all been charged with offences under SOCPA (serious organised crime and police act). Read report.

In Ffos-y-fran, South Wales, over thirty climate activists and local residents took mass direct action to prevent excavation work on Britain’s biggest ever open-cast coal mine. Climate campaigners from all over Wales joined with local people from Merthyr Tydfil to evade police and security before taking over the 1,000 acre site on a hilltop near Cardiff. They chained themselves to bulldozers and other heavy machinery to prevent work on the mine and unfurled large banners. The leading environmentalist and author, George Monbiot, amongst their ranks. Climate Protestor, Tim Helweg-Larsen, from Machnynlleth, said: “Gordon Brown’s officials this week jet off to Bali for UN talks on cutting carbon emissions but at home they’re trying to drag us into a new coal age.” He added: “Coal is the filthiest fuel known to man and projects like this mine could destroy all our chances of tackling global warming. The battle over this hilltop in Wales is a fight for the stability of the global climate and it epitomises this government’s hypocrisy on climate change.” Read original report and repost with photo.

Climate activists opposed to the plans for a third runway at Heathrow disrupted a Parliamentary inquiry going on inside the House of Commons. Protestors from climate action group, Plane Stupid, disrupted the proceedings of the Transport Select Committee who were hearing evidence from BAA boss, Steven Nelson and Aviation Minister, Jim Fitzpatrick. The team of protestors wore t-shirts emblazoned with, “No Third Runway” as they interrupted the inquiry into “The future of BAA” and handed out copies of a Tyndall Centre climate change report about the impacts of flying on global warming. Plane Stupid accuse the Government of pre-judging the decision on the Third Runway and ignoring recent scientific evidence about the impacts airport expansion would bring upon climate change. One of the activists of Plane Stupid, Richard George, said: “The Government are spinning that they want an open and thorough consultation on expanding Heathrow but they’re ignoring mass opposition and scientists’ warnings and are colluding with BAA to concrete over public debate.” Read full report. The struggle to fight the proposed expansion of Heathrow Airport seems far from over. Hard on the heels of a public meeting in Sipson came another in Harlington (both villages have to give way for the proposed expansion). In a packed church locals heard HACAN's John Stewart explain the deceits contained within the government's "consultation" process, followed by a precise analysis from NoTRAG's Geraldine Nicholson on what Harlington could really expect to suffer. Sipson has always been considered to be the ultimate victim of this particular expansion, not least because the whole village is set to disappear under Terminal Six. The biggest displacement of people in the UK since - as local MP John McDonnell pointed out - the Scottish clearances. Read report with photos: Heathrow expansion - Harlington's "army of ordinary people". For those unaware of the impact of aviation on climate change, listen to 'Aviation and Climate Change - a short interview during the Climate Camp'.

A peaceful banner protest organised by Biofuelwatch outside the Climate Investment World Conference at the Victoria Park Plaza Hotel in London, late November, led to the organisers moving the venue of the Biofuel Investment seminar session. Andrew Boswell from Biofuelwatch says: “The conference organisers ran scared today. Rather than allowing investors to see protestors raising genuine concerns about biofuels – their damaging impacts on people, forest, and climate - they moved the venue. Biofuels are a false ‘solution’ to climate change and it is time government and industry honestly admitted this.“ Last month, UN expert Jean Ziegler called biofuels ‘a crime against humanity’ because they push up food prices and take land away from food production. Mr Zeigler called for a moratorium on biofuel production to prevent a humanitarian catastrophe. The new biofuel investment planned in London today will directly translate into more people going hungry and more small farmers losing their land to big biofuel companies.” Deepak Rughani adds: “Far from being climate friendly, biofuel monocultures are destroying ecosystems, including rainforests, on which all of us depend for a stable climate. As a result, they are speeding up climate change.” Read reports with photos: London Biofuel Investment seminar runs scared of protestors | Another photo report. Previous feature article: Biofuels Conference Disrupted At Concerns Over Multi-National 'Greenwash'.

Background links: What Will We Eat as the Oil Runs Out? | Un-nerving Update to Recent Climate Report | Peak Oil And The Vision In The Mirror | Audio: Peak Oil & Climate Change - Twin Crises? | Peakfood in the Yorkshire Post