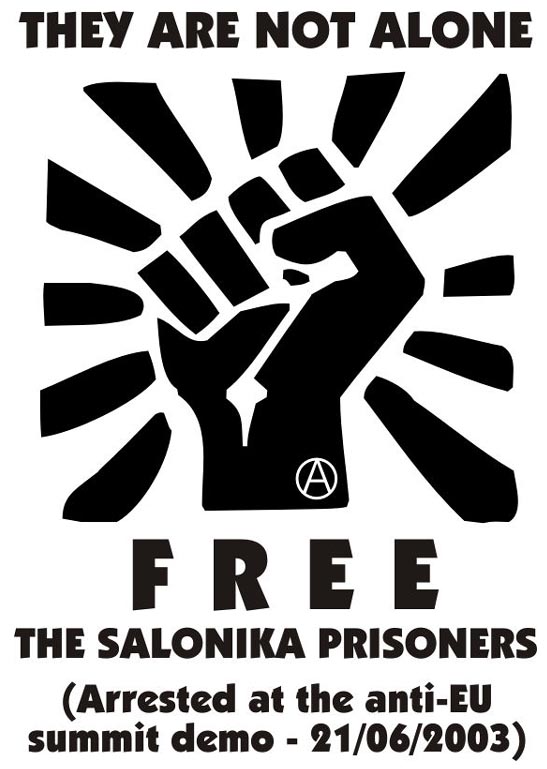 More than five months after the EU summit in Thessaloniki, 7 people incarcerated within the Greek prison system - Simon Chapman (English), Fernando Perez Gorraiz (Spanish), Carlos Martin Martinez (Spanish), Souleiman "Kastro" Dakduk (Syrian), Spyros Tsitsas (Greek) and two Greek juveniles - have finally been released pending trial. Despite overwhelming evidence that they have been framed and despite solidarity protests around the world, this only occurred after approximately 2 months of hunger strikes by 5 of the prisoners.

Previous information (not yet updated)
Kastro and four others have now been on a hunger strike for almost two months now [updates 24 Oct | 30 Oct | 05 Nov]. The Hunger Strikers are being joined in solidarity hunger strikes [Greek | Espanol]. Demonstrations continue in Greece [Athens 1|2|3|video - Thessaloniki 1] as well as elsewhere [see below for latest updates]. The legal team reports that the 3rd appeal has failed [Legal Team update 07 Nov|12 Nov].

Solidarity actions also continue in the UK: On the 27 of October a picket took place outside the London's Greek embassy. Two weeks later, on the 8th of November, the international day of action in solidarity with the Saloniki 7 hunger strikers, a demonstration took place in London [Pics and Reports 1 | 2 | Video], as well as a solidarity gig in Cardiff, a spontaneous action and a 24hr protest and solidarity hunger strike in Norwich [update], and a solidarity screening and talk in Colchester. In London an all nighter benefit gig was organised for Friday 14, and another solidarity picket [reports 1 | 2] on Saturday 15. For a complete listing of solidarity actions in the UK and abroad click here.

Corporate media within the UK have been paying some attention to Simon's case and Fair Trials Abroad as well as Amnesty International are monitoring the situation. More recently, Baroness Sarah Ludford MEP has offered support - as well as condemning violent actions by supporters in Greece.