In the early mornings of this week, a wide alliance of noborder people are blockading Glasgow's Brand Street Immigration Centre to prevent "dawn raids" against immigrants, starting on 14 Dec [pics]. Further direct action is being reported on the Openborders website.

This is part of a growing campaign against migration controls in the UK. On 17 Dec, protests are taking place in Glasgow, Sheffield [pics], Manchester and Yarlswood. 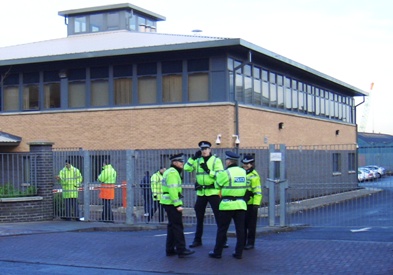 From indymedia scotland and noborder groups:

On 14 December, around 30 Anarchists, Christians, Communists, Clowns, liberals, muslims, pagans, refugee support workers, socialists and people of no particular allegiance descended on the UK Immigration Service Scottish Enforcement Unit in Glasgow's Brand St at 5am with the aim of preventing a dawn raid for one day at least [report].

An informal candlelit vigil was held outside.

After a while, a distraction of clowns arrived and the mood lightened a little. They declared themselves to be from Elsewhere and attempted to turn themselves in for deportation to Denmark, Jamaica, any country more sane than this one [report].

Around 8.30 the protesters left, satisfied that no raids would or could take place that day.

Security has been stepped up at the centre following several protest rallies, a recent occupation, two dawn raids and a weekly vigil every Saturday.

There appears to be a constant police presence, and extra (private sector) Securicor guards. The Police were already there at 4am today.

At the last blockade there were three arrests, and at the vigil two weeks ago, a security guard was charged by the Police for threatening a peaceful protestor. The guard was back on duty today, opening and closing the gates for people signing on. (They have to queue outside in the cold, even with children, as there are not enough staff in the centre)

A protest and rally is planned for this Saturday, 17th December. It’s being organised by Glasgow Campaign to Welcome Refugees and the recently formed No Borders Glasgow collective.

This is all part of a growing campaign of direct action against migration controls in Glasgow.

More noborder groups are meeting in Birmingham, Leeds, London, Manchester and Sheffield - please add comments if you know more.
Those who are of the opinion that "no one is illegal!" can use a noborders forum and an open announcement mailing list.