www.saferspaces.exposed is being launched today, 17th October 2014, the day before the London Anarchist Bookfair, where the seed for the Solidarity Collective was sown in 2013. This seems an appropriate date to choose for our launch.

Hard copies of Document 1 will be available at the Bookfair. We hope for a successful Bookfair this year and that this contribution will result in serious debate and discussion, more awareness of the issues and some positive action to stop the cycle of physical and psychological violence that is tearing us apart.

For a number of years, members of this collective have watched with dismay as political activists and organisations have been attacked in particular ways by particular groups of activists. These attacks have included threats and violence against individuals and their friends and supporters; public denunciation of activists as abusers, infiltrators or informers; harassment; disruption of public events. Those targeted have found their lives seriously disrupted, have experienced stress, trauma, depression and on occasion have even become suicidal. At the time of writing, these attacks are continuing.

Strategies and tactics that were once reserved for active fascists, like "No Platform", are now being applied to Socialists and peace activists. For example the incident at the Cardiff University Students Union Freshers' Fair on Tuesday, September 23rd 2014 and the attempt to ban the SWP at Edinburgh University Students' Association. 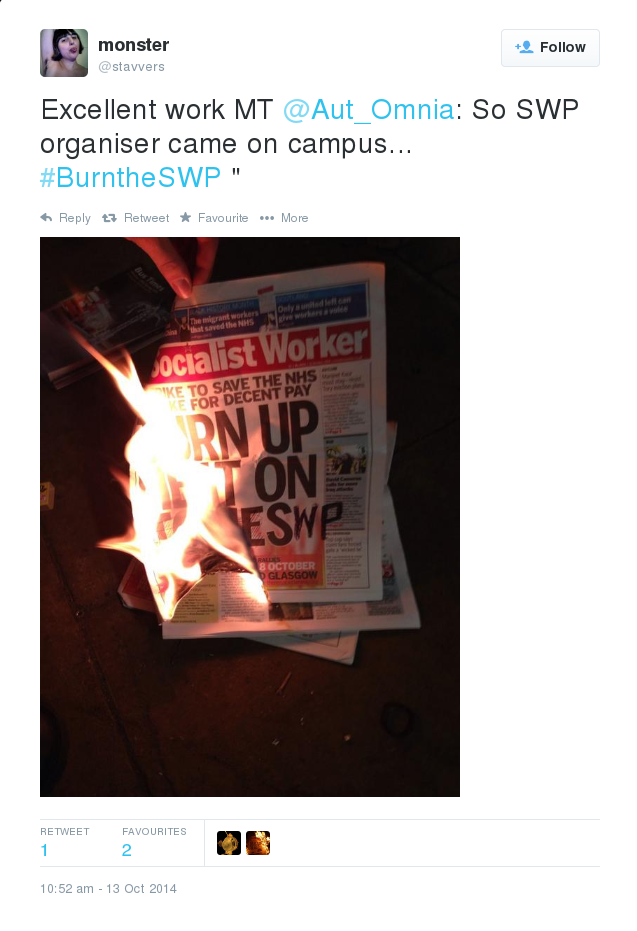 Some attacks have gone on to develop a more sinister edge. In at least one case, the personal movements of an activist who has been targeted are being passed on to a fascist group. In another incident, a photograph of an activist's child has been published online. In a number of cases, attacks have directly led to arrests on spurious grounds. All of these attacks share some common features: distortion of the truth, omission of key facts and downright lies. In many cases, no effort has been made to fully investigate allegations or speak to all the key stakeholders. In others, people have been placed under duress and pressured to engage in corrupt restorative justice processes, sometimes under threat of violence if they refused.

Threats: I will smash his face into the kerb - mp3 192K — Source: indymedia.org.uk

The Solidarity Collective believes there is a pattern to these attacks, most of which are being carried out, ironically, in the name of 'safer spaces'. The effect has been to undermine activist networks and to slowly grind down the morale of those who are motivated to take on the state and capitalism at both local and national levels.

Our aim is to provide information to assist readers to reach an informed understanding of the situation, and to be in a better position to make up their own minds as to the motivations and agendas that might be involved. We will also aim to use the facts at our disposal to offer a critical analysis and to shine a light on various attacks on groups and individuals that have happened since 2011. The Edward Snowden leaks have revealed that there has definitely been state involvement in the case of Julian Assange and Wikileaks with attacks - both physical and in cyberspace - on Wikileaks and its support base.

In the other cases, we do not know for sure if the state has been involved, but there are strong parallels in tactics — making unsubstantiated claims, blog posts purporting to be from victims and sock puppet accounts on social media platforms, for example — that, thanks to Edward Snowden, we now know to have been employed by GCHQ's JTRIG (Joint Threat Research Intelligence Group) to discredit activists and derail the left.

This is work in progress and to begin with we are focusing on one case, that of RMT Union leader Steve Hedley. In Document 1, 'The FOCUS E15 Mums, Steve Hedley and Social Exclusion', we consider how the continuing accusations of domestic violence against Hedley have caused ripples of disunity and fracture within a new grassroots movement that had previously been united and effective. In Document 2, we examine the allegations against Steve Hedley and the available evidence in some detail, as well as the related Rory MacKinnon incident and the attacks on the Morning Star newspaper. In future posts, we plan to look at the attacks on Julian Assange and WikiLeaks, the 'Comrade Delta' affair and the ongoing attacks on members of the SWP.

We had also planned to have a section looking at the attacks on 'unnamed activists', many of whom would not come forward publicly for fear of retaliation. However we feel the release of the report by Anonymous Refused via Tumblr.com offers a mature, thoughtful and inspiring personal reflection on the consequences of such attacks on individuals and groups and neatly covers this topic. We couldn't have put it better ourselves and we have included it on this site.

These attacks, many of which are ongoing, have resulted in bitter divisions in activist networks. We hope that the material on this website will contribute to the debate around such attacks and help us collectively find ways to deal with them in future, to prevent these situations escalating to the detriment of all concerned and to protect ourselves from the harm they are causing to the movement as a whole.

For your safety and security...

The Burden of Proof

Do you need help with publishing?

You are viewing this page using an encrypted connection. If you bookmark this page or send its address in an email you might want to use the un-encrypted address of this page.