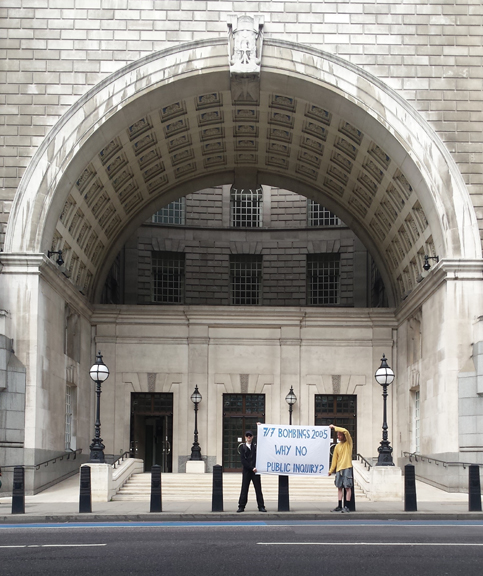 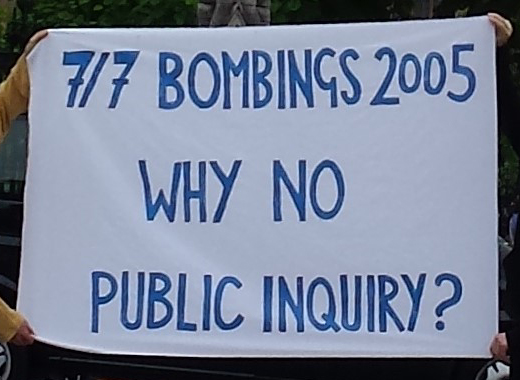 On Tuesday 7 July, UK politicians and their corporate media allies gathered to insult the memories of those killed by the 7/7 bombs by staging a propaganda event which was designed to promote further mass killing of muslims. Activists meanwhile dropped a banner in Whitehall calling for a Public Inquiry into the events of 7/7.

Tony Blair defended the decision not to hold an Inquiry in 2005 saying, "We do essentially know what happened."

After nearly two years and the emergence of disturbing new evidence about the attacks David Davis, then shadow home secretary was moved to state the obvious,

".. the government have not told the British public the whole truth about the circumstances and mistakes leading up to the July 7 attacks.

"The case for an independent inquiry into the attacks of July 2005 is now overwhelming. It is the only way to achieve clarity for the British public, closure for the bereaved and ensure the security services and government learn the lessons to help prevent another attack."

However, as the parliamentary paedophile scandal has shown the elite will not disclose damaging information without a fight.

To estimate just how damaging the real story of 7/7 may be to the establishment, the key unanswered questions surrounding the event need to be reviewed, as Tom Secker does in his documentary film '7/7 Seeds of Deconstruction.'