This afternoon a protest was held outside Henry Giles House, the Cambridge Job Centre branch, in solidarity with Tommi Miller, a boy with cancer whose benefits had been suspended by the DWP. 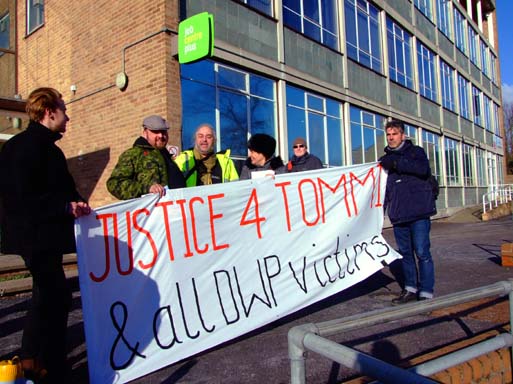 Good News for Tommi! Now, what about everyone else who's been sanctioned?

Some Group 4 security staff decided to take it upon themselves to confront the small group of peaceful protestors who had turned up with a banner (depicted), a confrontation which a local journalist witnessed and documented.

A link to their story is at the end of this article.

Several police vehicles arrived after the G4 team had called them to the scene, but it seems common sense prevailed and there were no arrests.

By the end of the afternoon there was some good news (for a change!) as it transpired that after a lot lobbying by local people, and some pressure from Julian Huppert MP the DWP decided to not only restore his ebenfits, but back date them too, along with some compensation.

Now, if only the DWP could provide the same duty of care for all the other hundreds of thousands of claimants they've sanctioned!