Israel launched a new offensive on the people of Gaza last week which claimed the lives of 162 Palestinians. Four Israeli civilians and one soldier have also died as a result of retaliatory rocket attacks.

As of 20th November 23% of Palestinian casualties were children. The youngest victim of the recent Israeli aggression is 11-month-old Omar Al Mashharrawi.

Hundreds of solidarity demonstrations have been held globally and a national demonstration is planned in London on Saturday 24th November. On Friday 16th November a demonstration was held in Birmingham and another is planned for Thursday 22nd outside the BBC offices to protest biased reporting. In Brighton on Saturday 17th November activists locked on to the Ecostream store, a shop owned by an Israeli company that has its main manufacturing facility in the West Bank settlement of Mishor Adumim. Later on a hundred strong crowd marched to the store and held a noisy demonstration outside the shop. On Monday 19th a phone and twitter blockade of the company was held.

The same day in Wrexham activists picketed Barclays Bank in protest at Barclays investments in companies supplying weapons to Israel.

On Tuesday 20th a group of solidarity activists occupied G4S headquarters over the company's contracts with the Israeli prison service as well as providing equipment and services to Israeli military checkpoints and maintaining contracts with businesses working in Israel's settlements.

The 'Don't Dance with Israeli Apartheid' campaign held demonstrations against London performances of the Israeli state sponsored Batsheva dance troupe at Sadlers Wells on the 19th-21st November as part of a coordinated international campaign. There were also protests both inside and outside of the Birmingham performances at the Hippodrome on the 14-15th November coinciding with the start of the latest Gaza massacre.

Palestinians in the West Bank have also been demonstrating in solidarity with their brothers and sisters in Gaza, only to be met with typical Israeli oppression. On Saturday, 31-year-old Rushdi Tamimi was shot by an IDF soldier at a protest in the village of Nabi Saleh. He died of his wounds in hospital on Monday around the time news surfaced that Hamdi Mohammad Jawwad Al-Falah, 22, was killed after being shot four times during a demonstration in the Bir al-Mahjar neighborhood in western Hebron. A baby also died in hospital on Monday after an Israeli tear gas canister landed in his bedroom in Qalandia refugee camp.

A ceasefire was reached on Wednesday 21st of November. However, the conflict is likely to continue if Israel does not end its siege of Gaza and attempts to control the Gazan economy. The need for solidarity with the people of Palestine struggling against Israeli militarism, apartheid and occupation has never been greater. 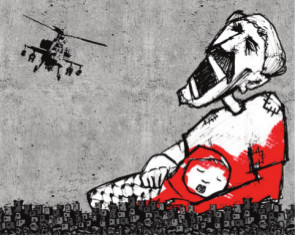 Back in Gaza, one single strike on Sunday evening left 10 members of the Dalu family and two of their neighbours dead as their homes were reduced to rubble. The media has also been targeted as Israel seeks to halt the spread of information highlighting the injustice brought upon the Palestinians.

Gaza has been under siege by the Israeli military since 2006 and is subjected to regular bombardment from the Israeli Air Force. The Israeli army also make regular ground incursions into the strip - the latest incursion resulted in the killing of a teenage boy as he played football with friends on November 8th. In January 2009 the last full scale attack resulted in the deaths of over 1400 people including more than 350 children. Schools, hospitals and aid depots were all targeted.

Since Hamas came to power in democratic elections in 2006, the Israeli state has punished the people of Gaza with an unimaginable level of barbarity. Medical supplies and food aid are restricted by Israeli border guards, alongside much needed building materials and parts needed to repair machinery. As a result, children are malnourished, hospitals buckle under the strain of patients, there are no sewage treatment plants, poverty is endemic and the economy is being stifled.

As Israeli bombs rained from the sky there was nowhere for Palestinians to escape. Gaza contains some of the most densely populated areas in the world - approximately 1.6 million people live n a stretch of land 24 miles long and between 6 and 12 miles wide - making it impossible to avoid civilian casualties. As usual, the targets that were hit rendered improbable the Israeli assertion that they are merely trying to take out weapon caches and launch sites.

Not that the Israeli state had any real desire to prevent Palestinian suffering. Shortly after Hamas swept to power back in 2006 Israeli health officials calculated the minimum amount of calories (deemed to be 2,279) needed by each Gazan. This was then translated into the truckloads of food Israeli border control were to allow through daily. According to Dov Weisglass, adviser to then Prime Minister Ehud Olmert "(t)he idea is to put the Palestinians on a diet, but not to make them die of hunger."