The G20 group (or G22) will be meeting at the Excel Center, London, on April 2nd 2009. The main aim of this summit is to discuss how to re-build confidence in the financial markets and “re-stabilise” the world economy given the current financial crisis. The meeting will be composed of finance ministers from the European Central Bank, the International Monetary Fund, the European Union, and the World Bank. 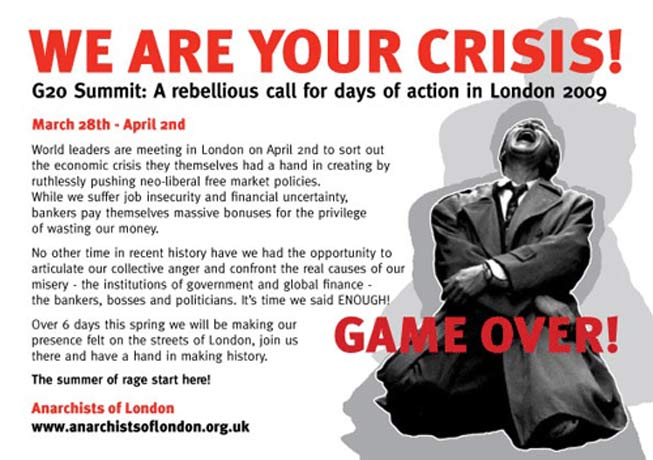 We are your crisis!

On 28th March thousands will march through London as part of a global campaign to challenge the G20. Marching for jobs, justice and climate action, a militant workers: direct action bloc has also been called by anarchists, using solidarity as a weapon in the steets whilst putting working class anger first.

A Financial Fools Day Street Party (Reclaim The Streets) and a Climate Camp have been organised for Wednesday April 1st. For the G20 Meltdown initiative, four blocks against the war, climate chaos, financial crimes and land enclosures (borders) will march towards the Bank of England and the financial district, the square mile 'protest exclusion zone' in the City of London.

On the morning of the summit, Thursday 2nd, activists will deliver thier message to capitalism by banging on the doors of the Excel Building, while anti-authoritarians attempt to crash the London Stock Exchange as traders arrive for work. A second march organised by STWC, PSC, BMI and CND to the G20 conference centre is to follow the days events, with further direct action planned against the summit. (1 | 2).