November 28th and 29th Brighton Activists Stage a series of actions around town centre against Eon and New Coal. 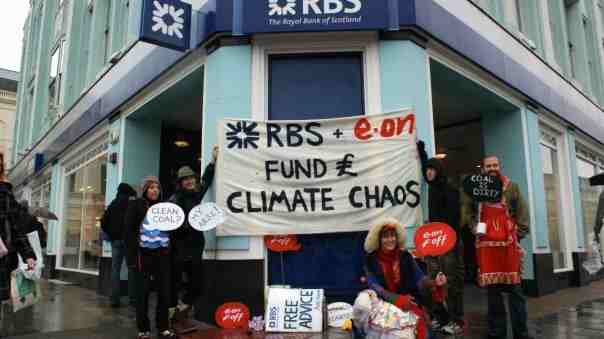 RBS/EON F. OFF Demo in Brighton

In Response the the 48 hours of action against Eon and new coal Brighton activists staged 2 actions over the 48 hours. The first action on Friday 28th Activists staged a demonstration outside the Royal Bank of Scotland with a large banner saying ‘RBS and EON fund Climate chaos’ With some subversive cleaning ladies attempting to Clean some coal but strangely to no avail – (Illustrating the unfeesability of ‘clean coal’). There was also alternative ‘banking advice’being offered to passers by, letting them know about RBS and its investments in EON and the building of a new coal-fired power station at Kingsnorth.

On the Saturday 29th A stampede of endangered animals decended on Brighton Town centre handing out flyers to raise awareness about EON and its plans to build at Kingsnorth. In the middle of the large shopping centre forecourt the animals staged a dramatic ‘die-in’. With bewildered shoppers and security guards crowding round this tragic scene, Mother earth herself addressed the crowd and explained what might happen to the animal kingdom and the human one if EON and other Coal hungry companies were allowed to have their way and wreak climate havoc!