Gaza: the Transparency of Naked Aggression

In spite of strict censorship, even blocking Reuters, a growing minority see proof that 9/11 was a cynical self-terror act to ignite a new war of civilizations for total world domination -- and share this insight as the only way to stop the war on Iraq and Iran.
Here we explore the parallels with the endless war on Palestine. 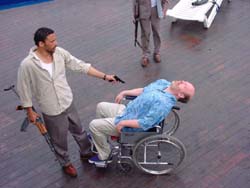 How to Start a War

On instructions of an Israeli double agent, extremist Abul Abbas hijacked the cruise ship
Achille Lauro, brutally killing helpless Leon Klinghoffer. It was one of the all-time triumphs of Zionist
agitprop against the Palestinians. Source: The War on Freedom, p. 367.

WHAT IF the recent kidnapping of the Israeli soldier and settler were an Israeli false-flag operation?

There is a sense in which it doesn't matter; the brutality of the collective punishment of Gaza has
shocked the world regardless. Yet the war party have worked out that spontaneous protests are never
enough. Peace will not have a chance, until people of good will see through the tactics of fake
self-terror.
The Israelis sacrifice a pawn or two to militants, then issue themselves carte blanche to kill and destroy
as much as they want in Gaza and the West Bank.
The kidnapping is so convenient and ready-made for the goals of ongoing Zionist aggression, that it
is hard to believe it wasn't made to order. I'm not into long-shot coincidence theories.
On the other hand, the odds of the establishment peace mouthpieces subscribing to my "conspiracy theory"
may seem as long as the odds of thousands of Palestinian prisoners to a single Israeli one.
Four years ago, in The War on Freedom, I wrote:
"Hamas, a major detonator of violence, was financed by Israel as a counterweight to the PLO."
"Undercover action by Oriental Jews posing as Arabs was a standby of early Zionist tactics. Spies do more than observe and report;
they can also infiltrate an enemy organization as provocateurs to instigate actions that backfire on it.
Any observer of the Mideast crisis will note how regularly and severely the Palestinians seem to hurt
their own cause with ill-considered attacks." [In The War on Freedom, p. 365, citing the
"Arab Platoon of the Palmach... the elite strike force of the Haganah" in "Early Operations of
Israeli Intelligence," The Department for Jewish Zionist Education.]

I then pointed out that while it can be difficult to distinguish dupes from double agents -- bin Laden
is an example -- their effect is the same. "In a terror organization, the ready-to-die cannon fodder are only
the bottom level. They have handlers, or operators; these have managers, who select the targets. Once
the organization is infiltrated, it is easy enough to taint their ideas and influence them in the wrong,
outrageous direction."
Often enough we do see evidence that an atrocity is directly instigated by the synthetic terror tacticians
of the world powers, as with the recent "sting" in Toronto, where the Mounties delivered the
"explosives" to the patsies themselves. Since Israeli covert operations have completely infiltrated and
dominated Palestine for generations, their hand is generally better hidden nowadays, but the synthetic
terror intent and program are indisputable nonetheless.
The intense infiltration was corroborated by a Christian Science Monitor reporter who noted in "How
Israel builds its fifth column" (

http://www.csmonitor.com/2002/0522/p01s04-wome.html) that Palestinian society is
absolutely riddled with Israeli informers and collaborators.
Any population will have a few hotheads. Synthetic terrorism is the perverted military intelligence
technique that recruits or even creates the necessary fall guys and then capitalizes on them. But any
Palestinians crazy enough to invite an overwhelming asymmetrical response do not represent Palestine.

http://www.waronfreedom.org/tarpley/chicago-resolution.html
=========
Reuters: 9/11 conspiracy theorists gather at LA conference
June 25, 2006 (summary).
1,200 people packed the "9/11 and the Neo-Con Agenda" conference of two days of seminars, video
presentations, and a panel discussion to be shown on C-Span.
"There are hundreds of smoking guns that people need to be made aware of," said organizer Alex
Jones, radio talk show host. He called for the impeachment of Bush and Cheney and charged the
mainstream media with a cover-up.
Prof. Steven Jones released further conclusive proofs that the steel structure of the WTC was sliced in
place by thermite before being exploded in a controlled demolition. Actor Charlie Sheen, DVD
producer Dylan Avery and Congressional candidate Lt. Col. Bob Bowman also put in appearances.
Webster Tarpley, author of "911 Synthetic Terror; Made in USA," said the Sept. 11 attacks were an
example of "state-sponsored, false-flag terrorism" designed by rogue CIA elements "to start the war of
civilizations." Tarpley said Washington was "gripped by war psychosis" and had used terror as a pretext
to turn the United States into a police state.
Full text: