Hundreds of thousands protested against government and police violence in Oaxaca

The Police attack against a striking teachers encampment in Oaxaca City, Mexico, on the 14th June was extremely violent. It left hundreds injured and eleven arrested, nine of whom were badly mistreated. However the teachers have successfully fought back, retaking the square from which they were evicted. Now a massive wave of solidarity has raised the demand for the resignation of the governor of Oaxaca.

On Wednesday, 14th of June, at 3am police units started to shoot teargas from helicopters on the encampment of striking teachers, from the Oaxaca Democratic Teachers’ Union, Section 22 of the National Union of Education Workers (SNTE in its Spanish initials). Shortly afterwards thousands of police, armed with tear gas, smoke grenades, stun grenades and firearms, stormed the occupied main Plaza in Oaxaca where teachers have been gathering for 23 days to protest against Governor Ulises Ruiz Ortiz and for better education.[NarcoNews] The union building was stormed and four journalists from Radio Planton were the first to be arrested. After the police retreated, the teachers retook the central square. [Statement of the EZLN]. At about 6pm the University Radio was raided by police and the transmission cut off.

On Friday, hundreds of thousands demonstrated in Oaxaca against this police brutality and to demand the resignation of the governor Ulises Ruiz Ortiz.

Since the Other Campaign begun, state repression has increased, with a red alert anounced by the EZLN after a brutal police attack in Atenco about a month ago. 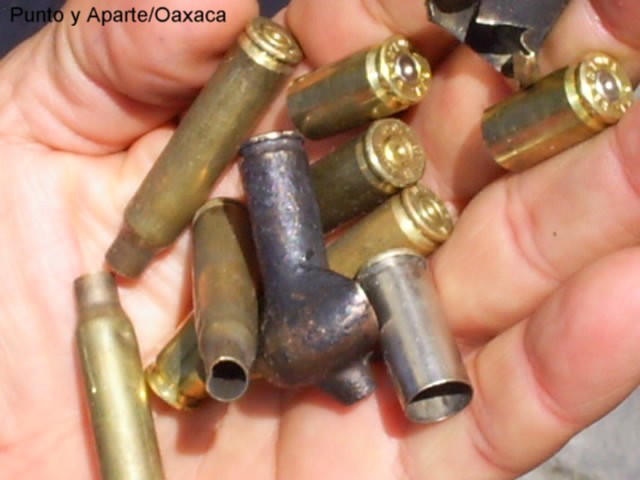 The police attack on the striking teachers encampment in Oaxaca City on 14 June was extremely violent. Tear gas was fired indiscriminately at the crowd, including from helicopters. Human rights organisations report that 192 injured people received treatment from the medical services, with in addition hundreds more being treated by street medics etc.. At least one person suffered a gun shot wound and is in a serious condition in hospital. People were viciously beaten when arrested. There have been several reports that people died in the police assault, including one or more children, but as at 19th June human rights organisations stated that they were still unable to confirm or refute these reports, and were continuing their investigations. 11 people were arrested during the attack.

The week following the early morning police assault on the 14th, the maestros and supporters occupied the zocalo only from the hours of 8 AM to 8 PM. However, they have been doing other things. Tuesday marked their statewide assembly, which I don't have aq huge amount of information on, other than that they've decided to make decisions by taking a vote. Since the beginning of the maestros planton, many other social groups have been involved helping out, and promoting their interests. Saturday was the first Oaxacan Popular Assembly, a meeting of many of the more radical folks who have been helping out, as well as more mainstream folks trying to get a neck in on the action.

OPA is an effort to build a unified opposition to Oaxacan Governor Ulises Ruiz Ortiz and the PRI, who ordered the bloody police attack. Present at the meeting were folks from the PRD (Democratic Revolutionary Party,) two socialist parties, the electricians union, the telephone union, social security union, The university facvulty of architecture and language, as well as several radical social justice groups based in the pueblos, such as the anarchist CIPO-RFM, and the socialist groups CODEP and OIDHO. All in all a total of 376 folks showed up at their first meeting, and ,deciding to make their decisions by concensus, they agreed on a document demanding for the immediate destitution of Ulises Ruiz Ortiz. It should be noted that these folks overlap some, because many of the members of the radical social justice groups happen to be maestros as well, and are constantly pushing from the inside to radicalize things.

Wednesday Ulises Ruiz Ortiz organized a march "in defense of education," the local paper reported that it arrived with "french perfume and the smell of onions," commenting on the fact that while some of Ulises`upper class followers made it there, a large number of the marchers were hired campesinos. Even while paying them, he still managed to garner less than ten thousand folks.

While many of the maestros have been scared away from returning to the zocalo, the social justice groups have been filling in their gaps, and wednesday also marked the first day returned to 24 hr occupation. The campesinos, activists, and teachers have built huge barricades on the streets surrounding the zocalo, have rocks and sticks piled up for the impending attack, and are busy building unity on the inside. The army has troops stationed in a part of the town called the cinco señores, and when a report was issued that they were mobilizing this aftyernoon, the people here quickly commandeered buses and set up blockades, gathering at the perimeters to meet the oppressors. It turned out to be a false alarm, but it shows that they are prepared.

Thursday CIPO-RFM and other social rights groups occupied the offices of TV channel 9from 8 AM to 4 PM to protest media disinformation and privatization.There have also been marches in the towns outside of oaxaca city, and yesterday a group of maestros blocked the highway on the isthmus of tehuantepec for a number of hours, burning a bus in the action.

All of these things point to a growing social movement within Oaxaca that is on the verge of being revolutionary. I saw a poster yestyerday that said "Ulises Ruiz Ortiz, the only governer able to unite all of the people of Oaxaca, but AGAINST him." With a little more time, some serious struggle and hope, things may end up truly changed and truly better, here