Roll the clock back a few years, and "patriots" (as racist national socialists still deceivingly like to call themselves), were fawning pseudo-tears for the victims of terrorist attacks. Tommy Robinson and his fascist thug friends engaged in walks to raise funds (supposedly) for victims families. As it happened, all the money went into racists pockets, Josh Bonehill included, as Stephen Yaxley-Lennon and fellow his fuhrers of the Far Right exploited tragedy for personal gain. Now, just a few years later, the far right are doing away with all the falsities of pretence, and when not invited to take part in legitimate anti-terror protests, they gatecrash the mourners, turning up doing straight-right-hand salutes to the world's worst ever terrorist Adolf Hitler, stamping on the wreaths laid by the mourners with cold, heartless white supremacist brutality. And if that wasn't enough to chill the blood, news outlets such as BBC and Sky News's Twitter accounts were teeming with support for the Hitler-saluting wreath-crushers, including registered UKIP supporters, who sickeningly called the Brussels hardcore neo-Nazis "people standing up for themselves". 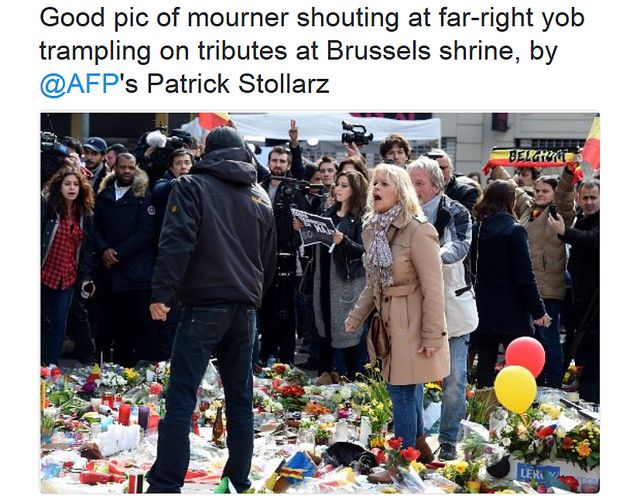 The BBC tweet hijacked by the far right contains few tweet condemning the Hitler lovers assaulting the victims of a terrorist atrocity of the kind the Islamophobes profess to hate. Tweet after tweet is supporting the enemies of humanity who, hypocritically, UKIP and Bluehand hatemongering trolls attacking multiculturalism and condemning peacemakers have grandfathers and other relatives who fought in the last World War.

This is the BBC tweet hijacked by Kippers, Biffers, BNPers, NFers, EDLers, Pedigans and assorted other despicable fascist scum. Be careful - anyone of a caring, anti-racist disposition will get mad and angry when reading all the Islamophobic bile and outright support of Hitler-saluting thugs tweeted by appalling Kipper trolls: -

There was a time when Nigel Farage claimed (and the media believed him) there were no nazis in UKIP, saying that far right groups were banned from UKIP. But since making this statement, serial Twitter racists such as David Jones have made a mockery of his disclaimer. Furthermore, Pegida neo-nazis (known for walking to car parks in the middle of nowhere), have not been proscribed, only suspended from candidacy, which says a lot about how Nigel no-longer gives a damn about what the general public perceives his party to be. Perhaps he knows, pretty soon, the game will be up.

Any UKIP members who tweet support of Hitler-saluting neo-nazis trampling over terrorist victims flowers should (but won't be) banned for life from the party.

The self-styled "James Bond", leader of #Bluehand, is said to be a computer repair shopkeeper from Halifax. One of these days, he will get sloppy and let some key personal details slip, and #anonymous will hack him to hell to discover his true identity. At the moment, he is a nobody and the battle is against a much bigger fish to fry, Donald Trump, but if and when they have a moments rest, they will set to work on #Bluehand, doing what they did to the BNP and EDL membership lists in the last few years.

Anybody English who applauds a bunch of nazi bully boys saluting Adolf Hitler and kicking and punching mourners, trampling on flowers, needs to read a history book. Thick racists, go back to college or school. It's not too late to see the error of your ways. It it had been some group like "Muslims Against Crusades" doing this, Daily Mail readers would have burst every blood vessel in their outraged guts, but neo-nazis desecrating the tributes to terrorist victims are perfectly acceptable to UKIP's appalling hypocrites.

Every time Kippers proclaim support of Israel, just like EDL's phoney "Jewish Division", it doesn't take much brainpower to see through their cover. In 2014, a public survey of anti-Semitic attitudes uncovered the highest amount of anti-Jewish hatred was within the ranks of UKIP, far much higher than Labour or the Tories, and yet, as a flag of convenience, so many of Farage's anti-Semites tweet pro-Israel stories with regularity. The hypocrisy is deafening.

Any love of Israel expressed by a UKIP member or supporter proclaimed on social media is ultimately driven by a wish to see Muslim (and Christian) Palestinian women and children killed as part of the Palestine conflict. Muslims are also loathed by Kippers for being 99% non-white, as are refugees, and (although they will still deny it), black people. Ask Dr Alan Sked about Farage's words about the "n*gger vote....."

Today's sickening nazi activities in Brussels, coupled with the British far right's support of the evil neo-nazi thugs, should be a wake up call for Dover.