Herefordshire gets Sett for Badger Cull

Opposition to badger cull in the 'Shire grows 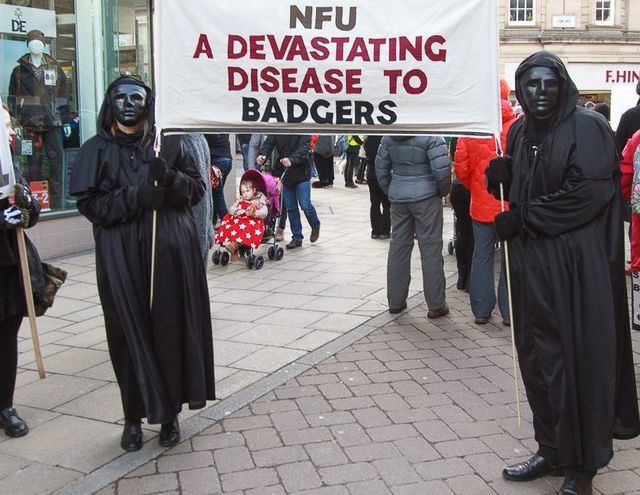 Hundreds of people marched through Hereford at the end of November to raise awareness of the controversial badger cull coming to the ‘shire.

The government, with backing from the National Farmers Union (NFU), believe that shooting large numbers of badgers will reduce the incidence of bovine tuberculosis (bTB) in cattle and its associated costs to the farming industry.

Pilot culls, which have already taken place in Somerset, Gloucestershire and Dorset, have proven to be an expensive failure. Analysis of the pilots by DEFRA, as well as a panel of independent experts, found a cost of £3,300 for each badger killed.

Evidence showed that the culls were ineffective and could even result in an increase in bTB. The pilot culls were also found to be inhumane with many badgers taking longer than 5 minutes to die.

Unfortunately the lobbying power of the NFU is so strong that the Tory government will do anything to keep their support, even when evidence proves that culls don’t work. And so they plan to extend the cull to Herefordshire.

Not all farmers are convinced by the NFU policy though. A Herefordshire beef farmer who wished to remain anonymous told the Heckler that farmers should do more to reduce bTB before blaming badgers.

“The cost to farmers from bTB is massive and threatens livelihoods but many farmers aren’t helping themselves. TB infected cows should always be quarantined but often aren’t. Water troughs should be cleaned and put out of the reach of badgers but basic bio-security is not a priority to some farmers. On top of that we have a huge problem of lameness in the national herd making cows susceptible to all sorts of illness.”

This point of view is unpopular with the Government and NFU who’d rather paint those opposed to the cull as ‘extremists’.

Anyone who took part in the march through Hereford would have seen a diverse group of people brought together in opposition to the scapegoating of badgers.

Organisers of the march hope that people will join them to lawfully and peaceful protest to stop the cull. Herefordshire Badger Group will be coordinating efforts to oppose the cull.