Overview of the Week of Action against the Prison Industrial Complex

This is only the beginning. Full account of the week of action here: 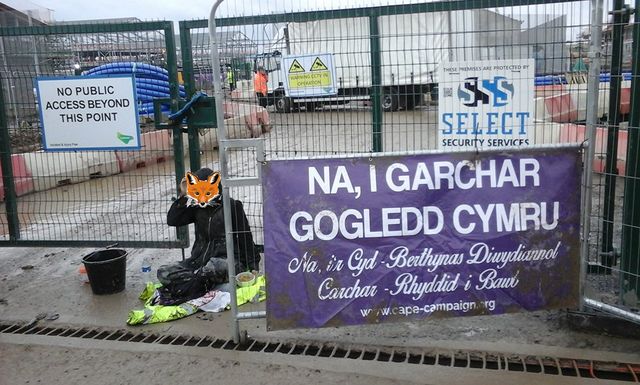 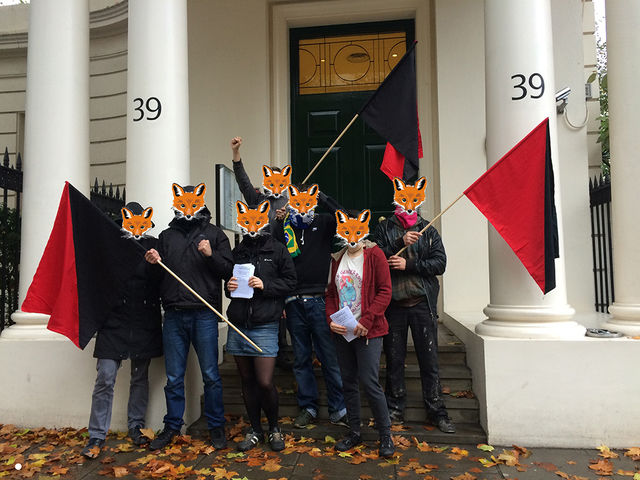 From the 31st October to the 8th November 2015, a week of action took place against the prison industrial complex in the UK. A small group of anarchists, working with others from across the UK, traveled to different cities each day to target the companies connected with the North Wales Prison Project (Europe’s second biggest prison currently in construction).

Actions also took place as part of the Smash IPP campaign, a campaign fighting for the release of IPP – indeterminate sentences for public protection – prisoners. The IPP sentence has been abolished, yet thousands of people remain in prison unable to get out with no clear date of release. These sentences are destroying lives leading to increased suicides and self harm, as well as the grief and despair of families.

On Saturday 31st October, the United Friends and Family Procession took place in central London, bringing together families of people killed by the state on the street or in its police stations and prisons. At Kebele Social Centre in Bristol a large group of people watched the film, ‘Visions of Abolition’ on Sunday 1st November. A banner picture was also taken in solidarity with anarchists arrested a week before in Catalonia.
On Monday 2nd a day of action took place in South Wales. A demonstration was held in the town centre and Cardiff Probation Office to as part of the Smash IPP day of action. Hundreds of leaflets were distributed. A run-in demo also took place at Faithful and Gould, project managers for the North Wales Prison project.

TuesdayOneTuesday 3rd was a busy day of action in Birmingham. More companies were targeted that are connected to the prison building programme. A noisy highstreet demo took place in Solihull, the location of Lend Lease, the main construction company building the prison. Stalls were held at local prisons to meet IPP prisoner families, including at HMP Oakwood, the UK’s largest prison run for profit by G4S.

On Wednesday 4th organisers were confronted by Hipster Security Guards at the office of BIM Technologies in Manchester. Other run-in demos took place, including at the huge offices of Lend Lease. Stalls were held at the local prisons and good connections were made with local people.

thus1On Thursday 5th, the North Wales Prison itself was confronted by activists, including two that D-locked their heads to the gates, delaying traffic for the day. Local press coverage highlighted the reasons for the action and in the evening a film showing took place in Wrexham about the prison abolition movement in the US. Meanwhile in London, a group of people came together to learn about the UK’s plans to fund a new prison in Jamaica. A group has emerged that wish to campaign against the project (contact us to get linked up and get involved).

fri1On Friday 6th a demo took place at the Spanish Embassy who have been arresting and imprisoning anarchists in Catalonia. Lend Lease had preemptively shut their offices and whole neighbourhoods of South London had been postered linking prison struggles with the gentrification of the area. A fundraiser took place in Liverpool in the evening for the Lovebank 5, recent prisoners (now released) from Liverpool who were imprisoned for occupying a bank and opening it up for the homeless.

DSC00245On Saturday 7th the recruitment drive for Wrexham Prison was disrupted. Hundreds gathered at Yarl’s Wood Dentention Centre in solidarity with the detainees inside its walls. A noisy and inspiring demo took place, with the voices of the prisoners heard over a microphone linked up with a mobile. It was clear to see strong links and connections between no borders and anti-prison struggles.

tan ir carDuring the week anti-prison graffiti was sprayed up in Cambridge. On the other side of the world, Lend Lease were targeted in Sydney, Australia. In Sydney, Lendlease is currently involved in a huge casino project called Barangaroo. The project has major state government backing and is responsible for the social cleansing of Millers Point, the last working working class district in inner Sydney. Over the first week of November dozens of slogans against Lendlease and its projects were painted on walls across Sydney. Lendlease banners were torn down from their construction sites, repainted and hung from highway bridges.

Overall it was an inspiring week and the first of many. The UK is becoming increasingly repressive, with its CCTV, immigration raids, prison expansion and cultural hegemony rationalising the prison society we live in. The only way to resist this is in the streets, with our time, energy and bodies confronting state control of our lives with all we have. Until All Are Free!

To get involved in the CAPE Campaign email