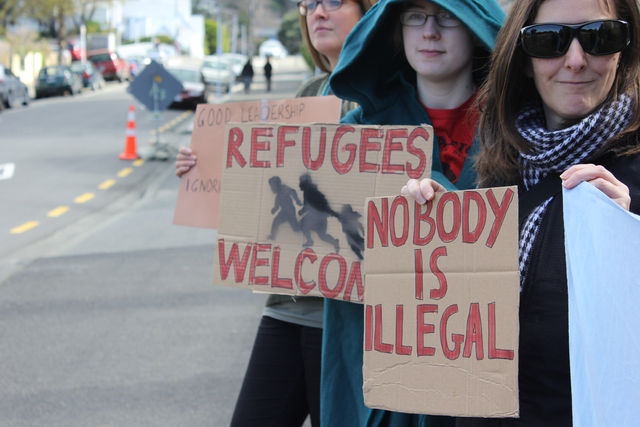 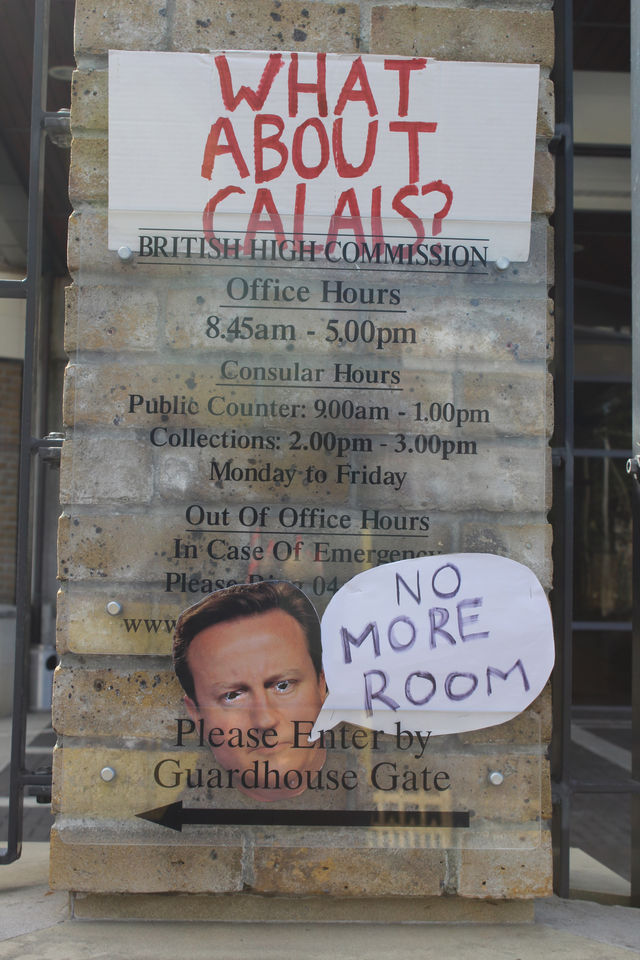 
Outraged British citizens and other supporters today gathered outside the British Embassy in Wellington, New Zealand to protest the UK response to the refugee crisis –on the same day that PM David Cameron admitted extra-judicial RAF killings in Syria. Protesters demanded an increase in the number of people to be accepted into the UK – including accepting those who have already reached Calais or Europe; and demanded that the UK government take responsibility for their share of the blame for causing the refugee crisis. When questioned about military intervention in Syria, the British Embassy spokesperson Pip Morgan falsely claimed that there had been none – despite David Cameron today taking responsibility for illegal airstrike assassinations which took place in Syria on the 21st August.


Pip Morgan of the British Embassy also refused to admit a British share in political responsibility for the displacement of millions of people across the Middle East and North Africa, claiming vaguely instead that it is a “humanitarian crisis”. Conversely, Peace Action Wellington state that the disaster is the "direct and inevitable consequence of the 2001 war in Afghanistan and the 2003 war in Iraq". UK representative Morgan also claimed that the UK is "doing better than most European countries” with new statements from David Cameron that he will accept 20,000 people over 5 years – a claim undermined by a comparison with Germany who are planning to accept between 800,000 and a million asylum seekers this year.

Lisa Claxton who attended the demonstration in Wellington today said “British citizens in the UK and around the world are feeling increasingly alienated and unrepresented by a government which is refusing to commit to a serious response to the refugee crisis and are now taking steps to destabilise Syria further by committing extra-judicial assassinations. The government ignored us when we told them not to attack Iraq and now they’re ignoring us again.”

The executions committed by the UK government in recent days have also been condemned by the likes of Amnesty International UK whose director Kate Allen stated today “It’s extremely alarming that the UK has apparently been conducting summary executions from the air. In following the United States down a lawless road of remote-controlled summary killings from the sky, the RAF has crossed a line.”

The protest at the British Embassy today resulted from a call on social media for UK residents of NZ who were shocked about the UK government's response to the refugee crisis. It also ties in with numerous protests planned around New Zealand Prime Minister John Key's refusal to respond to calls to at least double the refugee quota.