Campaigners inspired by a Reclaim the Fields action camp demonstrated their opposition to the building of a new mega-prison near Wrexham with a visit to a company involved. 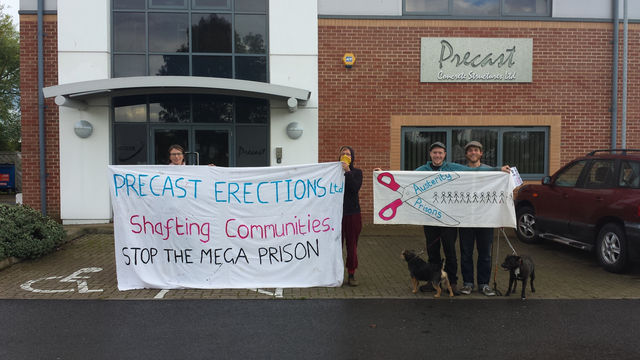 We paid a visit to the Gloucestershire offices of Precast Erections Ltd, the company supplying concrete blocks used to build the prison.

"Prisons are part of the problem." said Olly Torcada. "They are abusive places used by the state to control and threaten us."

"We need justice processes based on strong, vibrant communities," said Frieda Evans, "not more prisons which harm and destroy our communities."

The event was part of a series of prison-related actions, which included solidarity noise demos at 3 different prisons, and a blockade of the prison construction site itself.

[1] It is estimated that the proposed new prison will cost £250m. It will hold more than 2100 prisoners and be the largest prison in the UK and the second largest in Europe.

[2] Reclaim the Fields is a constellation of people and collective projects willing to go back to the land and reassume the control over food production. The organisation held an action camp at Borras Community Protection Camp entitled 'Build Gardens Not Prisons' in solidarity with local anti-fracking campaigns, with workshops on a range of topics linking access to land, prison abolition and opposition to fracking.