The Sotheby's 4 need YOU!

All the courageous cleaners and porters – "the Sotheby's 4"– that took part in the protest on Wednesday demanding sick pay and end to trade union victimisation have been banned from site by Sotheby's auction house (aka sacked). Some of them have been working for Sotheby's for over 5 years. 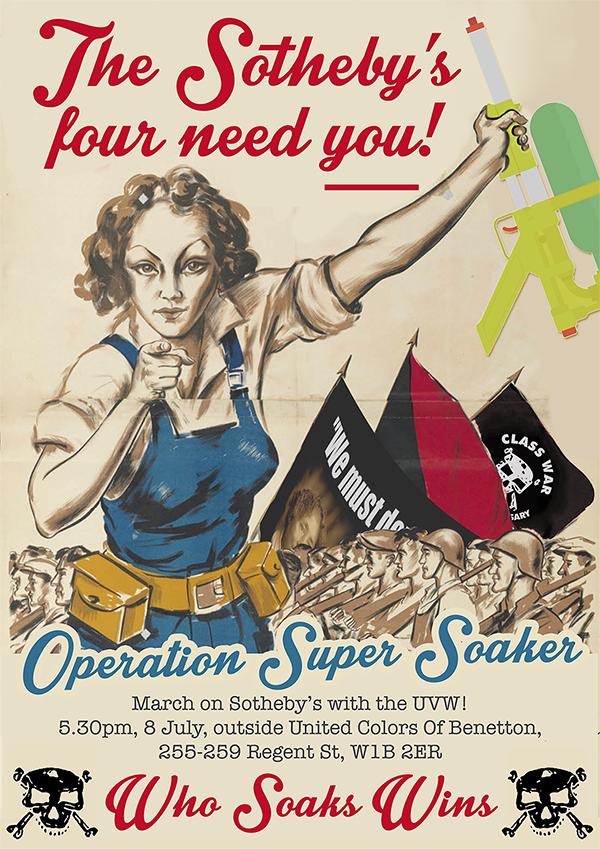 We will now fight tirelessly for their reinstatement. Please come in solidarity to show Sotheby's real people power and to remind them that the master-slave realtiosnhop is long dead.

The support we got from different people, groups and trade unions has been absolutely fantastic. Lets keep on fighting till they are reinstated and receive proper sick pay!

The "official" reason given by Sotheby's stooge contractor Servest for sacking them is: "Sotheby's has instructed us to remove you from their site with effect from 1st July 2015....because your involvement in the recent protests was a deliberate act to disrupt Sotheby's lawful business which may have resulted in a significant loss of revenue, and could have put their business at risk".

Shame on them! Lets show them what we think about them at the next major auction coming up this Wednesday.

WE WILL MEET AT 5.30 PM AT UNITED COLOURS OF BENETTON AT OXFORD CIRCUS