Last summer’s assault on Gaza, which killed over 2,200 Palestinians, was one of the most brutal effects of Israel’s ongoing occupation and colonisation of historic Palestine. The massacre was carried out using drones manufactured by Israeli arms company Elbit Systems. In response, activists occupied Elbit’s factory in Shenstone, causing its operations to grind to a halt and costing Elbit over £100,000.

On 6th July, to mark the first anniversary of the assault on Gaza, groups and campaigners from across the UK are going back to Elbit’s factory to demand that the UK stops arming Israel. Join us for a day of creative action in solidarity with Palestine!

Supporting organisations have endorsed the call and will be there taking collective action to block the factory from making these weapons. 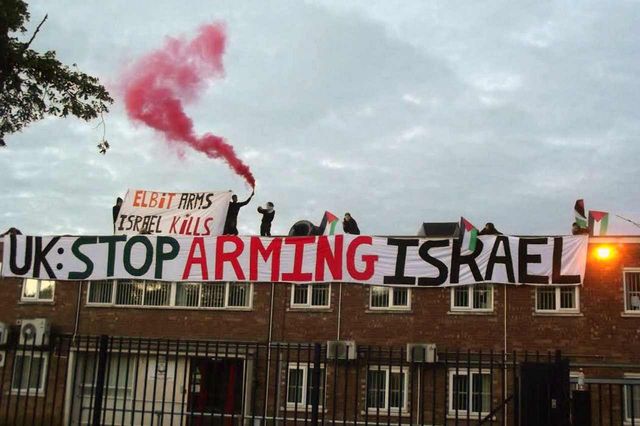 HOW TO GET THERE

Trains run roughly every 20 minutes from Birmingham New Street, and tickets cost around £4.50. Earliest trains are at 06:01 and the last train returning to Birmingham is at 23:32.

We will be transforming the space around the arms factory, converting it from a site of destruction into a fun, creative and child-friendly environment. Let’s create a space that meets our needs and not the needs of Israeli and multinational corporations that export death for profit.

Whether you have never been on a protest before or are a seasoned activist, whether you are disabled, an older person, a younger person, whether you have five children or none, we need you to come and make this the biggest, most beautiful action yet at an arms factory in the UK!

WHAT ELSE CAN I DO?

If you are active in a Palestine action or solidarity group in the UK, and want to be involved in planning the action, or even just coming along on the day, let us know! Email blockthefactory [at] gmail.com

The action is what we make it! Could you run a kids’ space there? Lead a mass lock-on? Set up a craft tent? Run a tranquil space? Coordinate a Palestinian food picnic? Make paper wind turbines – not drones? Buddy up with wheelchair users? Whatever your skills and ideas, they are needed to make the day work. Email blockthefactorY [AT] gmail.com

WILL ANYONE ELSE BE GOING FROM WHERE I LIVE?

Groups are travelling to Shenstone from all across the country. Ask your local Palestine solidarity group if they can help you with transport, especially if they’ve endorsed the protest; alternatively, you can ask us if we know of anyone, or post on the Facebook event to see if you can find anyone else?

WHAT TIME IS IT HAPPENING?

We want to make the day as accessible and inclusive as possible. If you have access needs or will be coming with children and would like to discuss practical arrangements, please get in in touch by emailing blockthefactory [AT] gmail.com.

WHAT DO I NEED TO BRING WITH ME ON THE DAY?

Come rain or shine, we will be there! Please come prepared for all weathers and conditions – bring raincoats, suncream, comfortable shoes, sunglasses and plenty of food and water.

WHAT ABOUT THE POLICE?

We will work together to make the action space as safe and accessible as possible. However, we can’t guarantee that the actions of the police towards us will always be safe. We will have experienced legal observers present on the day, and lots of people who are experienced in dealing with the police. We will have Know Your Rights cards and bust-cards. We recommend that you check out Green and Black Cross before coming along.

WHY THIS FACTORY? WHY ELBIT?

Despite international condemnation, Israeli apartheid, occupation and oppression of the Palestinian people continues. The UK government has done nothing to hold Israel to account for its crimes. Instead, the government is placing profits from the arms trade before justice for Palestinians. Elbit is Israel’s largest arms company. Its Hermes 450 drones have been described as “the backbone” of Israel’s aerial attacks. Elbit’s UK subsidiary, UAV Engines Ltd, manufactures engines for drones, which are exported to Israel and countries around the world. By manufacturing parts for Elbit, UAV Engines Ltd profits from Palestinian suffering. Amnesty International has also previously suggested that engines manufactured at this factory could have been used in attacks on Gaza.