On this day 70 years ago joyous drunken revellers danced in the Mall and jumped in the fountains at Trafalgar Square – and today it’s a crime to drink outdoors. Now formally bustling public houses are virtually empty of local people. Not surprising, where a pint of beer can cost more than a meal in this land of austerity and taxes and cuts imposed by the Conservative Party. 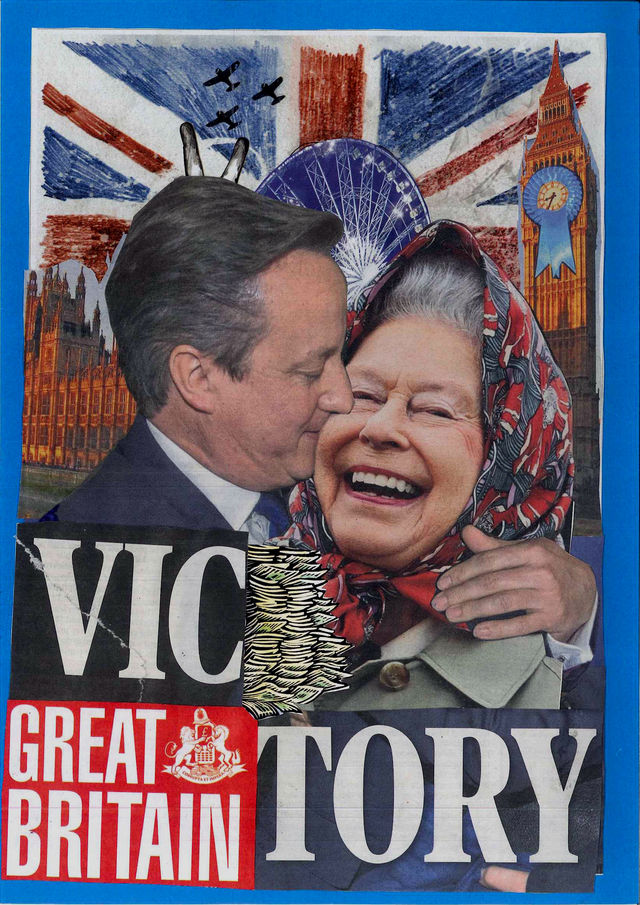 It's hard to believe that this time last year I was penniless and homeless and sleeping in a graveyard, but now here I am with a room in a move-on St Mungo’s hostel, and since I qualify as a British subject, at my present age of 65, a monthly government pension and a Freedom Pass - a swipe-card that allows me to use all public transport in London free of charge. Great! I can hop on and off whenever I like, and avoid the embarrassment suffered by those attempting to ride free, or caught with an untopped-up oyster card by eagle-eyed inspectors.

Actually, most of the time I prefer to walk. The underground, with it’s still sterile air and the crammed company of silent commuters going to and returning from their wage slavery is depressing, and travel by bus, with the interminable stops for traffic lights and the mounting and dismounting passengers can be tortuous.

I try to walk through as many green public parks as I can along the way. Many of the streets of London are presently so scarred with metal fenced pedestrian detours surrounding the rubble of excavated craters dug for non-ongoing roadworks and pavement repairs, fences surrounding demolitions and constructions, that, along with the almost constant high-pitched wail of passing police sirens, it’s sometimes feels like being in a war zone. This impression was increased when I walked across town recently to attend a mass protest against the gentrification (social cleansing) of Brixton last week. I lived there as a squatter in in the early eighties, and was even arrested in one of the famous Brixton Riots!

Before the rally I went to see Russell Brand’s film ‘The King’s New Clothes’ at the Brixton Ritzy. The cinema was full and I had to sit on the front row, too close for me to focus comfortably. I found Russell a bit too close as well, his cuddling arm around interviewees’ shoulders whenever he gets the chance. He was losing it for me recently when he advised all those who weren’t going to vote in the election to vote for the Labour Party instead. And when, in the film, he laughed: “I LIKE the police!” he lost me completely.

When I came out of the cinema I found I had missed most of the action. There were lots of police about in their lemon-yellow jackets, some guarding Brixton Town Hall. An estate agent’s shop window in the high street had been smashed. I heard police had used cs spray on demonstrators, and arrests had been made. I joined protestors and onlookers outside the guarded police station for a while, but feeling cold, decided to step on a passing bus heading homewards to Camden Town, another area seriously prey to the property market and gentrification.

Last Saturday, post-election day, (I didn’t vote), I was back in Brixton, again at the Ritzy, to see a British film called ‘The Falling’. On my return I got off the bus at Lambeth Bridge and walked along the Thames, it being a sunny evening, towards the Houses of Parliament, nest of the newly triumphant Cameron and his crowing Conservatives. I found the square in front of the Parliament building surrounded by police in those bloody yellow jackets – in fact they were everywhere, and metal barrier fences lined the roads. Curious, I walked up Whithall towards the sound of chanting from the other side of the road. Scrawled in red paint on the black marble of one of the cenotaph war memorials I noticed the words:

A not very big crowd of demonstrators were being kettled on the grass in front of the War Office, police busy trying to divide the indignant group into two. I stopped to watch, unable to cross the road because of the barricades. Some officers approached a couple of young guys who were standing watching on the wall next to me and told them to get down. They did, and then started running, pursued by a posse of police. All were caught, and one guy was thrown to ground by a gang of them, his arms twisted back and handcuffed. Shocked, I asked why they were being treated in such a manner for simply standing on a wall. I was briskly informed that the guys had been under observation during previous events during the day. After a careful body search, they were questioned and their belongings inspected.

The chanting of the crowd on the other side of the road grew louder as the police managed to divide the group, leaving one half still corralled, and driving the other up in the direction of Parliament Square. I followed as far as I could on the pavement with the milling bemused tourists, but could not get far, and a whiff of cs spray in the air put me off persisting. I roared “ONE SOLUTION – REVOLUTION!” once, then turned and continued my way up Whitehall.

On the way I met a guy on a skateboard who told me thousands of people had been there earlier to protest against another five years of Tory rule, which is going to see more cuts, more privatisation and more austerity. The demonstration that had originally taken place outside Conservative Party headquarters and spread. Fifteen protesters had been arrested. He said there was another big demonstration planned for June 20th, which will take place outside the Bank of England.

Further up the road I found Horse Guards’ Parade surrounded by more yellow-jackets, but most of them were crowd-control staff there to regulate attendees at a concert to celebrating the 70th anniversary of VE Day, when the Second World War ended in Britain in 1945. Tickets cost 50 pounds.

I walked on to Piccadilly Circus, pleased to see the Statue of Eros no longer surrounded by the scaffolding which had surrounded it for months, and people able to lounge on the steps around it as of yore. I saw a policeman pouring a bottle of wine into a rubbish bin, and asked what he was doing. He said he had confiscated the wine from someone as it was illegal to drink in public. Another policeman came up with another bottle in a plastic bag and emptied the contents into the bin. “It’s against the law,” he said.

Some VE Day! On this day 70 years ago joyous drunken revellers danced in the Mall and jumped in the fountains at Trafalgar Square – and today it’s a crime to drink outdoors. Now formally bustling public houses are virtually empty of local people. Not surprising, where a pint of beer can cost more than a meal in this land of austerity and taxes and cuts imposed by the Conservative party.

I thought I was in luck when I saw a bus waiting at a stop, but it was being held up by an argument between the driver and a passenger who had slipped on without paying. The other passengers sat silently during the angry altercation.
“FREE PUBLIC TRANSPORT!” I shouted, and continued walking. I was nearly home when the bus crawled past me.

At the VE Day Thanksgiving Service of Remembrance at Westminster Abbey the following day, attended by the Royal Family and the Archbishop of Canterbury, Prime Minister David Cameron read from Romans 8:31-39 - the first two lines of which could almost have been a comment on his ‘surprise’ election victory: “What then shall we say to these things? If God is for us, who can be against us?”

The reading ended with the words: “ For I am sure that neither death nor life, nor angels nor rulers, nor things present nor things to come, nor powers, nor height nor depth, nor anything else in all creation, will be able to separate us from the love of God in Christ Jesus our Lord.”

Hmm. Let the words of Jesus himself answer:”Not everyone that sayeth unto me “Lord, Lord” shall enter into the Kingdom of Heaven - but he that doeth the Will of my Father which is in Heaven.”

Which basically means, (described by Jesus as ‘the Law’) - “Do to others as you would have them do to you.” Ya doin’ that, Dave? I don’t think so.

(The last hymn of the service was "Christ is the World’s True Light".) What a den of hypocrites!)