Wiping the smug look off the face of capitalism!

When a young anti-capitalist leapt on to the desk in front of European Central Bank president Mario Draghi when he was giving a press conference in Frankfurt on April 15, the look on Draghi's face was priceless. 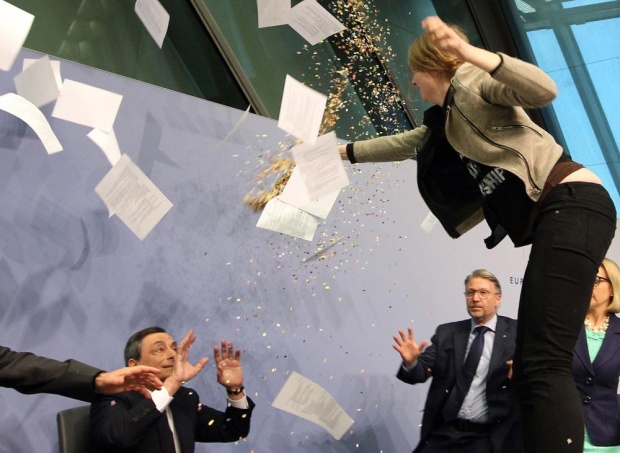 The impact of this one-woman protest (following on from the thousands-strong protests in Frankfurt a few weeks ago and hopefully continuing with the May 1 protests against the World Fair in Milan) is something that needs to be matched on a theoretical level.

We heretics of the capitalist age need to blow a hole in the smug certainties of the neoliberal cult of which Draghi is part.

Jobs, economic growth, regeneration. These are its holy words, the sanctimonious doublespeak that is uttered every time it carries out some new abomination.

Like all such dogma, these terms “cannot” be challenged. They are supposed to be self-evidently desirable. From within the capitalists’ world, it is so obvious that “everyone” is in favour of jobs, growth and regeneration that they don’t even feel they have to argue the case.

But the truth is that it is precisely only from within their world that they make any sense. It is only by accepting all the assumptions that lie behind these loaded terms that they appear to be positive concepts.

For instance, don’t we all need jobs? How else would we have any food or shelter? How else could we live – unless we are rich or “sponging” from the state? But the reality is that most “jobs” have nothing to do with feeding us. They just provide us with tokens (money) which we can exchange for food, grown on the land which has been stolen from the commons of a non-owned planet by an elite who invented the idea of “property” to justify this theft and then invented the idea of “law” to justify the constant violence they use to hold on to their ill-gotten gains.

A “job” is not a good thing in itself. It depends what you are actually doing. Nuclear weapons factories create “jobs”. Rainforest clearance creates “jobs”. Prisons, detention centres, animal testing labs, concentration camps – all of these involve “jobs”.

We, those of us who reject the capitalist world, need to break through the barriers to understanding erected by the words they use and by the assumptions behind them.

Already, the degrowth movement is pointing out that “economic growth” is about as good news for humanity as a “cancerous growth” is for an individual.

Likewise with “regeneration”. Capitalist regeneration is nothing but destruction. Real regeneration would start with the clearing away of the toxic infrastructure of the industrial capitalist machine that we are somehow allowing to destroy the one thing we can never do without – the planet we live on.

But it also must start with the clearing away of the assumptions and certainties which capitalism uses to hide the reality of its violent domination of humankind.

As long as we dissidents continue to pay lip service to the neoliberal liturgy of jobs, growth and development, the face of the capitalist system will retain its complacent certainty that we are incapable of seeing through its exploitative lies – and acting accordingly.

Also in this issue:

* Film: “The city is the end of the world”
* The “regeneration” scam
* Developers erase communities and their histories
* Forms of Freedom – new anarchist book from Winter Oak
* Government are a bunch of fracking hypocrites!
* Brighton solidarity with jailed Spanish anarchists
* Acorninfo