Trouble on the terraces

Video from an impartial attendee

On Saturday 28th of March 2015 an altercation unfolded during a home match of Clapton FC in East London. Clapton FC fans are known for their antifascist politics. The altercation took place between two sets of Clapton fans: on the one side some of the founders of the 'Clapton Ultras' and originators of its antifascist stance and their families, other well known antifascist activists, members of the RMT and visiting Celtic FC fans who had travelled to London from Scotland; on the other side the main bulk of Clapton Ultras this season, who now include members of the ISN and RS21 splits from the SWP. 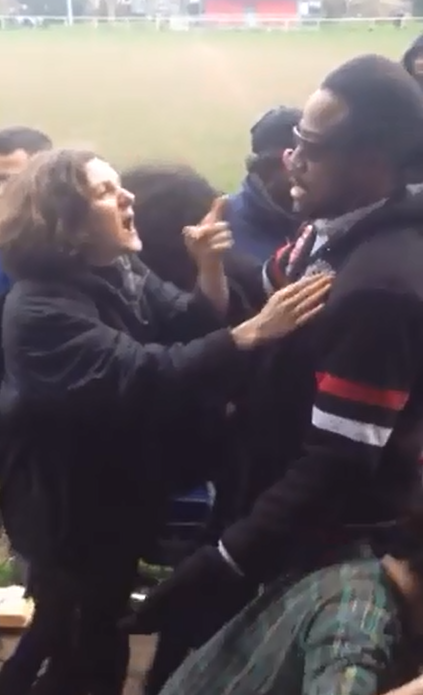 Sometime after 3pm on the 28th, reports started to come through on twitter of an incident.

From these initial reports circulating on social media, we were led to believe that RMT members, including Steve Hedley and visiting Celtic fans, took over the stand and began attacking people with beer cans and spitting on women who had asked them to leave.

Steve Hedley is seen as a controversial figure in some sections the activist and anarchist scene after an allegation of assault was made against him by Caroline Leneghan. It is accepted by both Steve and Caroline that an incident did happen in 2012, but the allegation that it was domestic violence only surfaced when Steve ended their relationship in 2013. Following the allegation a full investigation was carried out by the RMT at the request of Caroline and Steve was found to have no case to answer.

Full background to this can be found here.

https://saferspaces.exposed
Despite the findings of both the RMT and the police, elements of the left and the activist scene have campaigned for his exclusion as a point of principle, almost uninterested in the details of the case, drawing a simple line: if you don't join in the exclusion and online 'calling out' of Hedley, you are an enabler domestic violence and against women.

Most serious groups have followed the lead of the RMT and made a principled stance that whatever your opinion, you must work with the findings of an investigation and avoid bringing personalities into serious class politics, especial when the RMT faces such hostile coverage in the corporate media. However individuals who are based in academia and the enormous online leftish-commentary scene have suddenly developed a huge interest in the case, using as a stick to beat those who continue to work with this senior trade unionist, as well as to defame Hedley.

Earlier this season Hedley had beer thrown over him in a pub by a Clapton Ultra after a match, then was accused of assaulting someone else
almost immediately online. All that was clearly witnessed was someone throwing beer at Hedley's group, and then being restrained from throwing more beer slightly later; it is hard to find the allegation of assault as it was made in a now private post, but the general idea that Hedley had 'assaulted someone' was taken up by various online leftists.

Video from an impartial attendee

"I arrived during half time and walked around to the stand ("The Scaffold"). The first thing I noticed was the main bulk of the fans standing behind the goal, which was unusual. The fans in the scaffold included some regulars, some founders of the 'Ultras', and a visiting group of Celtic fans. Some people had RMT arm bands on because they had come from an RMT picket earlier that day. I said hello to a few people... chatted. It wasn’t clear at first what was going on or why the main bulk of the fans had moved behind the goal. I walked around to behind the goal and asked a few people what was going on. 'Some guy over there beat up his girlfriend and is an abuser so we moved over here' was the general consensus. I asked the fans on the scaffold what happened and they said they had greeted people as they arrived warmly but they had decided to leave the Scaffold and some had refused to acknowledge them at all, despite being long term fans.

I returned to the Scaffold when the match restarted. One of the male Clapton fans ran over from behind the goal to the Scaffold and tried to steal a Celtic antifascist banner. A scuffle broke out and the Clapton fan from the goal end ran back without the banner. At this point the women and children left the Scaffold and stood in the away fans stand in response to the banner incident. A few people from the Scaffold mediated with a few people from the goal end and it seemed to calm down. The goal end fans periodically would boo at the Scaffold fans. It became increasingly obvious that full time would present some issues. As far as the visiting Celtic supporters were concerned, they were in receipt of considerable hostility and were not going to leave before full time and give their attackers validation for their actions.

At full time the players walked to the fans at the goal end obviously confused about what was going on. Took their bows and left. Fans from behind the goal started to leave via the opposite side of the pitch so as to avoid the Scaffold. Some walked across the pitch. I realised that there may be some more aggravation so I also walked onto the pitch waiting for my friends to stop chatting and leave with me. There were quite a few people on the pitch not wanting to take any side and calm down any trouble. I was talking to someone and heard a commotion behind me. Turning around I saw a group of about 6 women who I didn't recognise as regulars screaming at the top of their voices and pushing against the stewards from the club who were trying to calm them down and keep them back as gently as they could. Behind the women a group of men formed some with their hoods up. The women were screaming continuously. One woman with dark curly hair was spitting on people in the Scaffold and chucking beer at them. The fans in the Scaffold didn’t retaliate but didn't leave. The women and men started pelting the scaffold with glass bottles and half cans of beer. Then suddenly a group of about 20 men rushed the Scaffold climbing the barriers. It was utter chaos - loads of people scrapping in close quarters. The fights spilled out on the pitch and people were chasing each other and fighting on the pitch. Everyone was still shouting and screaming. Others were in the middle trying to keep the groups apart. It was around that point the police turned up and we left"

Shortly after the match an activist in London who is not associated with Clapton FC was discussing the incident with one of the travelling Celtic fans. The Celtic fan stated that

"The bhoys are saying that trouble was caused by a female! Seemingly she started spitting and throwing her beer."

Another person who attended the match had this to say

"I attended the Clapton game with Celtic fans from Cowdenbeath and local Clapton fans on Saturday 28th April.Before the game I was shouted at, spat at and abused by the women shown in the video. After the game the same women accompanied by some men threw full beer cans at me and I was hit on the head and the shoulder.I was also spat upon and was hit over the head with a plastic bag containing beer cans.At no point did I retaliate as I knew it was their intention to provoke me. There was then an attempt by some male Clapton fans to storm the scaffold attacking the Celtic fans and the Celtic fans were forced to defend themselves whereupon the Clapton fans fled the scene."

Shortly after 4pm on the 28th Sarah Kwei @SarahKwei said the following on twitter:

"Faced down Steve Hedley and his body guards @ClaptonFC_Match. every1 has left the scaffold coz they WONT STAND WITH ABUSERS @ClaptonUltras"

Sarah Kwei is a prominent member of E15 Mums, a campaign that was shot to the front pages of the mainstream media after challenging the London Borough of Newham's lack of commitment to social housing.

This isn't the first time that elements of E15 Mums have been involved in attacks on Steve Hedley. A statement was issued on the 6th of October 2014

Jasmin and Sam of E15 released a counter statement

http://focuse15.org/2014/10/15/statement-by-jasmin-and-sam-focus-e15-campaign/ on 15th October 2014 stating,"In particular we would like clarify that the previous statement did not speak on behalf of the whole campaign and that Focus E15 campaign is open to men and women and all support is welcome and appreciated." This sort of behaviour not only damaging campaigns such as E15 Mums, but the whole of activism.

We have had some statements from those people in Scotland who attended this match and others who were not connected to either group and it's clear that there has been a campaign of disinformation since the events of Saturday.
This morning video evidence emerged that was taken by an impartial observer who was in attendance and passed to our collective along with various witness statements.

It is clear from the video that this group was not attacked as they stated but were in fact having to be restrained, spitting on individuals at the match and throwing both bottles and cans of beer.

It is clear from the footage available that the aggression was coming from one side. We yet again find it appalling that those who claim on social media to support victims of violence are in fact perpetrating violence themselves.