We are currently resisting a large scale eviction attempt in Dublin. Grangegorman is a large complex of occupied warehouses, converted offices, residential houses and community gardens. We have occupied the site for over a year and a half and are asking for people to help us resist eviction in any way they can 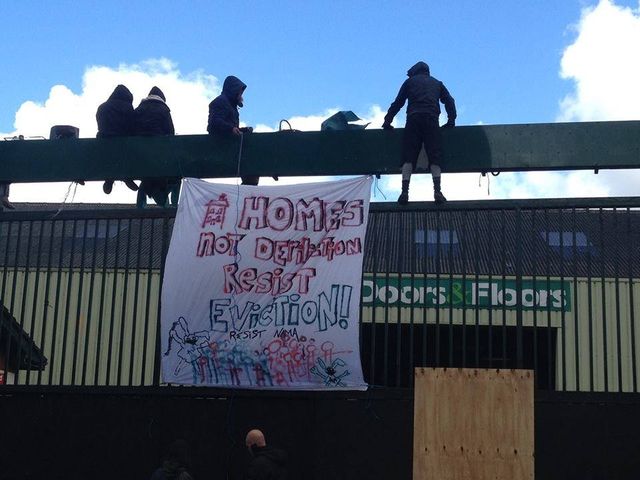 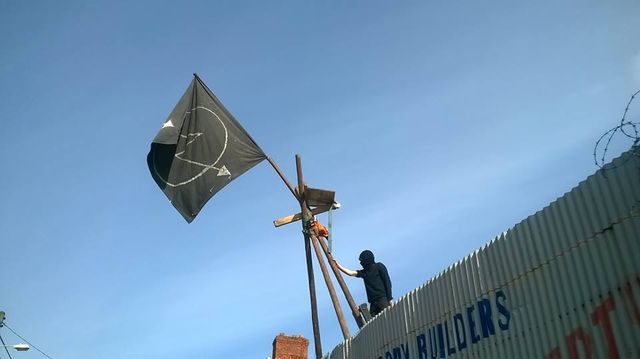 SquatCity (GrangeGorman), Dublin, currently resisting eviction.
We are putting out an international callout for support, to help us resist the eviction of our homes, and to defend squatting in Dublin. We have been subject to a large scale eviction attempt over the last couple of days, and we are currently resisting, and appealing for help and support.
Many of you would have stayed there during the International Squatters Convergence, and saw the space for yourselves.

Here is a brief timeline of what happened, as well as a short description of the space.
On Monday 23rd March, the squatted buildings at Grangegorman, where a community has been living for a year-and-a-half, was the subject of a violent attempted eviction by a large force of contractors and cops. Here is a summary of the situation.

THE SPACE:
The space consists of three houses, three converted office buildings, five warehouses, a main courtyard and two smaller yards, all home to around 30 people.
We are reclaiming unused space and building a community around it so it can be used autonomously for projects that would not be possible within the constraints of a rented space.
We hosted the 2014 International Squatter’s Convergence here and have also been host to many other events.

ATTEMPTED EVICTION ON MONDAY:
* At 6:30am on Monday 23rd March 2015, 30-40 private security and construction workers, assisted by a large number of cops, cut through the main gates and started erecting fences around the dwellings.
* Throughout the morning many people were assaulted by cops and security, and some were injured.
* No prior notice was given.
* Some residents found themselves fenced off completely from their homes and belongings.
* The private security threatened and intimidated the residents, and at one point residents found themselves trapped between two pieces of fencing that were being pushed against them.
* Once they had secured the temporary fencing, they went on to erect permanent, spiked fences around the houses.

MONDAY NIGHT:
* Protestors occupying the main gates, four metres high, were attacked by private security with metal bars. This was captured by a photographer from the back garden of one of the houses.
* The main gates were then forced open, causing one protestor to fall off onto the ground. His leg was seriously injured and he was brought by an ambulance to the Mater Hospital.
* Once the gate was open, a van attempting to exit the compound drove into a crowd of people. Protestors had to bang on the windscreen of the van to get the driver to stop.
* After the protestors were injured, the cops were eager to de-escalate the situation.
* Representatives from the protestors and LAS Group met with the Superintendent and negotiated that the protestors would let the vehicles leave if all the hired security would also leave.
* Afterwards, the protestors occupied the yard and celebrated successfully resisting the eviction.

WEDNESDAY:
We appeared in court for an injunction hearing, we were granted 24 hours to seek legal advice and are back in court on Thursday morning. We still occupy the space and are preparing to continue to resist.

We are asking the international community for help and solidarity. All kinds of support are welcome. We need people to come and help us occupy and resist, but also lots of other types of help. We need as many people as possible to help us defend the space, to stop the eviction, and to show the cops and baillifs that we won’t give up. We have a little time to prepare now, and it would be great if people could come to help. Many of you visited the space during the International Squatters Convergence and we would love for you to come and help if you can! We are expecting a large scale eviction and need all the help we can get, we will resist in any way we can, and if you are willing to come and help us fight off an eviction, it would be great!

If you want to contact us, for info or to tell us you are coming, please email:

We fought them off once, we can do it again. Fuck NAMA, Fuck the cops, Retake the City.