On March 18th 2015 thousands of anti-capitalists from across Europe converged on Frankfurt to disrupt the opening ceremony of the European Central Bank (ECB). A morning of intense rioting, followed by a 25,000 strong anti-capitalist demonstration, caused severe disruption to the ECB. Rabble received this account from someone who participated in some of the day’s events: 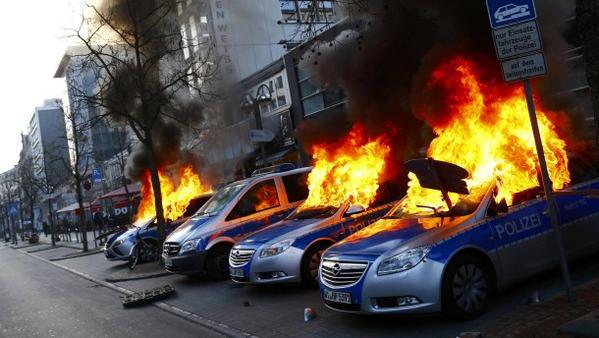 “From 5am on the morning of the 18th an estimated 6,000 people began marching on the ECB from different corners of Frankfurt. Activists had been organised into ‘fingers’, each with their own strategy to disrupt and blockade the ECB. 10,000 police, armed with pepper spray, tear gas and water cannons were concentrated around the bank.

As the fingers moved toward the ECB, banks, government buildings and shops were targeted. Paint bombs were thrown at the UBS building, windows were smashed at the local council building, Hilton Hotel and Sparkasse Bank. Slogans painted on the walls gave a clear message. ‘Smash Capitalism’ was written on buildings across Frankfurt. One person had written ‘The empire is dying’, and an advertising billboard for Intimissi underwear that objectified women was defaced with the words ‘Smash Patriarchy’. Police who came close while all this was going on were warned off by a hail of rocks.

As people got closer to the ECB, anything that could be moved was dragged into the road to blockade the area around the bank and prevent police movements. A building site was dismantled to create a strong barricade close to Ost Bahnhof metro station. Police who drove close to the crowd constructing the barricade soon thought better of it, and drove away at breakneck speed. A nearby road was blocked by an abandoned police car, which was set alight. The barricade was further strengthened by the torching of a luxury car.

Police responded by firing tear gas at demonstrators, charging at the crowd, punching and kicking demonstrators and kettling. Almost 400 people were held in a cordon and at least 17* people were arrested. One of the arrestees, Federico Annibale, a student from SOAS in London, has been in custody in Frankfurt since Wednesday. According to the NoTroika website he has not seen the evidence against him and has not yet been charged.

Despite police repression, people managed to set fire to dozens of police vehicles and set up burning barricades around the city centre.

By 11am riots had begun to abate, protesters danced on the streets at a sound truck at the end of a bridge close to the ECB, while police water cannons kept watch. The day ended with a colourful 25,000 strong anti-capitalist march through Frankfurt.

So, what is the significance of the Frankfurt riots? First of all, they are an effective example of propaganda by deed. The images broadcast around the world from the streets of Frankfurt may have brought a little hope to those suffering under the Europe’s austerity regime, to those ready to join the struggle for a different society. They send a message that people are, once again, ready to resist. They may also be the first step in a new wave of international resistance to capitalism.

On March 18th, thousands of German activists were joined by people from Italy, Greece, France, Ireland, the UK, the US, the Netherlands, Belgium, Turkey and Spain. Many of the international activists had come in large contingents, the size of which has not been seen since the heyday of international summit mobilisations. Those of us present on the day got a taste of what it is like to take part in a truly transnational demonstration, to make an impact despite the thousands of cops pitted against us, and gained inspiration and new allies.

Of course, the ECB protests had many of the problems that the international summit mobilisation movement also had. The Blockupy coalition was intentionally wide to maximise numbers, ranging from anti-authoritarians and anarchists to trade union organisations and the Die Linke party. The publicly announced planning meeting on the 17th, attended by over a thousand people, was reminiscent of attending the speeches at a traditional left wing rally. The Blockupy coalition felt the need to distance itself from the riots in the media. Ulrich Wilken, a coalition representative said “This is not what we in Blockupy had planned.” but that he “understood” people’s anger at the “policies of impoverishment”. A Blockupy statement later said that “individual actions” were “not responsible” – meaning that some demonstrators’ actions were irresponsible.

These so-called ‘representatives’ of the protests have their own interests at heart: the strengthening of political parties like Die Linke and other European left wing parties, in the wake of the success of Syriza in Greece. Those of us who want to see a non-hierarchical movement aimed at dismantling the capitalist system from below and creating alternatives which challenge all forms of oppression must be on our guard against our efforts being channelled into building popularity for these parties, which will not change the system and will only lead to further disappointments and failures for those who want to see real change.

Transnational resistance against capitalism needs to transcend the old cycle of counter-summits to create real solidarity between those resisting, to mobilise internationally to support local struggles, and to consider how a temporary show of resistance, as happened in Frankfurt, can make room for more permanent spaces from which to explore how to create new worlds free from capitalism and oppression.

If we are going to effectively resist capitalism, a system which defies national borders to dominate the world we live in today, we need strong local struggles, to challenge the system wherever we are and prevent further destruction of the earth and our communities by the endless drive for profit. But it is also necessary for us to see how these struggles are connected together, to get to know our allies living across borders and to recognise the power we have when we join each other. Let’s hope that the events in Frankfurt last week will spark a new wave of transnational resistance to capitalism which will strengthen our movements, reclaim space to create alternatives and inspire others to join the struggle.”

More photos from the day here and here.

Coverage and analysis in The Acorn anarchist news bulletin.

* Rabble previously reported that there were 400 arrests. In fact almost 400 people were held in a kettle but were released later in the day.