Early morning of 7th January, Chanti Ollin was evicted violently by police.
But the resistance continues.. 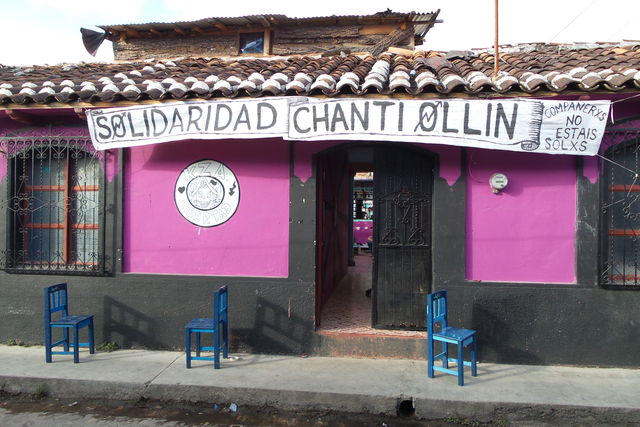 At 6am yesterday morning, Chanti Ollin, a 12 year old squat in Mexico City, was evicted illegally and unexpectedly. There was no eviction order, and the squat had been fighting successfully in the courts to keep the building from being passed on to a large development company.

There were around 10 arrests during the eviction. In Mexico, detainees can be kept indefinitely if they don't/can't/won't pay bail. The bail for these arrests so far is $11,891 pesos (equivalent of £534.58), which is a lot of money here. There have been call-outs to raise this, and there is also talk of refusing to pay it to the government in order to highlight people's lack of rights and the corrupt prison system.
More people were arrested and brutally beaten at the solidarity demo outside the copshop.

This eviction comes less than a week after the International Festival of Rebellion and Resistance against capitalism, called by EZLN (Zapatista communities) and the Sexta International, of which Chanti are members. Chanti is also involved in the solidarity movements for the 43 assasinated students disappeared during protests in Ayotzinapa. It is quite clear why the Mexican government would want this active, autonomous squat to disappear too.

The building was re-occupied today! The squatters have called out for support in order to occupy the building, and also to spread the word about the arrests. ¿Are UK squat networks up for calling solidarity actions or benefits? Banner drops/Demo outside the Mexican Embassy/Messages of support..