Activists Occupy Davis Commission Rooftop to highlight the phony commission that won't consider anything but expanding aviation, even in the face of climate chaos. 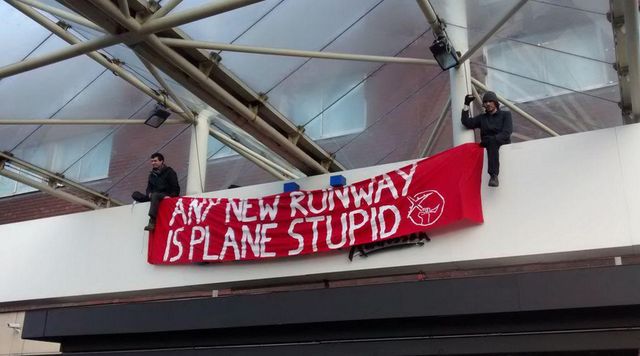 Early this morning protesters from Plane Stupid and Transition Heathrow scaled the Heathrow Park Inn Hotel and dropped banners saying “Any new runway would be Plane Stupid” and “Runner beans not runways” in order to show resistance to the Davies Commission’s consultation proposing a future runway at either Heathrow or Gatwick.

If Heathrow Airport’s proposal for a third runway went ahead, much of the village of Harmondsworth would be demolished, with the neighbouring villages of Sipson and Harlington also under threat. Over a million people living in London could be affected by long term noise and air pollution caused by this aggressive expansion. Heathrow are already exceeding EU air pollution limits, this is likely to increase not decrease with a new runway.

The Davies’ commission argues that an expanded aviation industry would still allow the possibility of the UK staying within its 2050 climate targets of an 80% reduction of CO2 (1), which is needed to prevent a climate catastrophe. This estimate relies on predicted technological change and the use of bio-fuels. Both are unproven and allow aviation to remain a special case, absolving the industry of any climate responsibility. We find this unacceptable.

Plane Stupid campaigner Charlie Smith says “The Davies Commission is a farce, it has not allowed for the possibility that the best option for the country and the planet is to avoid any further aviation expansion and seek investment in alternative means of transport. The Commission has prohibited a real debate about our transport future and as such encourages any future government to expand its aviation infrastructure thus sending us further along the road to climate chaos”