On the eve of the International Day for the Elimination of Violence Against Women (VAW), which marks the start of the 18 Days of Activism Against VAW, women’s groups held a press conference and rally in front of the US Embassy. The coalitions announced today that they unite in focusing on the call for justice for Jennifer Laude during this 18-day campaign period which starts on November 25, and will sustain the campaign until justice is served. 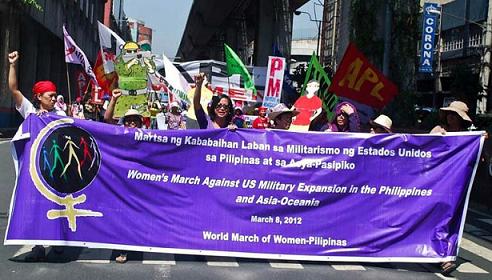 “We are all Jennifer!,” declared Jean Enriquez of the World March of Women, in behalf of the other women’s groups and supporting social movements who also participated in a rally in front of the US Embassy. “The commodification, the objectification, the hate crime, the murder of Laude are illustrative of the continuum of violence against women suffered by many women, including trans women,” added Enriquez. She explained how various forms of violence against women, including sexual harassment, physical and economic abuse, rape and others, share the same roots – that of gender inequality, that of keeping women in a subordinated status in society, and are interrelated, sometimes recurring in a woman’s life.

“Jennifer Laude was killed because of her sexual orientation and gender identity – because she is a trans woman,” said Jelen Paclarin, a leader of the Philwomen on ASEAN. Paclarin added that the groups demand the Philippine government, particularly the Department of Foreign Affairs (DFA) and the Department of Justice (DOJ), to exhaust all legal measures to ensure that Jennifer’s perpetrator will be punished under Philippine law.

Groups of transgender women highlighted the continuing spate of hate crimes against transwomen, such as the killing of two others in Quezon province, weeks after Laude was killed on October 11, 2014. Naomi Fontanos, Executive Director of GANDA Filipinas, stated that “as long as patriarchal beliefs and attitudes, sexism and machismo exist, there will be more Jennifer Laudes.” She stressed the need to expand anti-violence interventions to address those directed towards lesbian, gay, bisexual and transgender (LGBT) Filipinos.

Among the coalitions present is the Scrap VFA Coalition, represented by Proleta Nunez. They underscored that the Visiting Forces Agreement has to go, along with the Enhanced Defense Cooperation Agreement (EDCA) with the US. “The EDCA, like the military bases agreement, will likely be committing violence against women once it becomes operational,” said Nunez.

The women leaders vowed to be vigilant, especially during the Christmas season, as they remembered how US soldier Daniel Smith, then convicted with rape of a Filipina by a lower court, was transferred to US custody a few days before New Year. In the next 16 days, activities to increase awareness on the Jennifer Laude case, on sexual violence, hate crimes and US militarism, will be held. Among these are:

After the press conference, the women leaders, all wearing purple, proceeded to join the 150-strong mobilization that marched along Kalaw St., from Plaza Salamanca in Taft Avenue to the US Embassy. Upon meeting the mobilization, they took off their purple shirts to reveal their red shirts, “symbols of resistance,” with the slogan “We are all Jennifer!,” similar to those worn by the marchers.

Underscoring that US military presence worsens violence against women, the marchers raised crossed arms as act of protest against militarism and gender-based violence. November 24 was also the day that the last soldiers left Subic Naval Base by plane 22 years ago after extension of the bases lease was rejected by the Philippine Senate. However, VFA and EDCA were signed afterwards, which saw the rise in prostitution, rape and other forms of violence in areas opened to US military.

Upon reaching Plaza Ferguson, the women formed a huge human cross to signify that violence against women, hate crimes, and US military presence have no place in their lives as women, in society. “We seek to eliminate hate crimes, we seek to cross out gender-based violence, and we seek to end militarism.”