Akbayan Representative Walden Bello and Senator Miriam Defensor Santiago today close ranks as they call for the termination of the Visiting Forces Agreement (VFA) saying it is being used to shield US military personnel from Philippine laws for violations and criminal offenses done on Philippine soil. 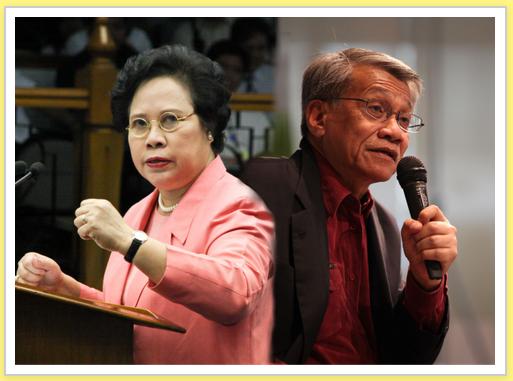 The House Joint Resolution no. 19 that they filed included the alleged murder of transwoman Jennifer Laude by Private First Class Joseph Scott Pemberton in the list of offenses that indicate the VFA's detriments to the Philippine interests since its inception in May 1999.

"The VFA allows the US military to act in wanton disregard for Philippine sovereignty, destroys our environment, and violates the human rights and dignity of the Filipino people," Bello explained.

"And instead of owning up to their mistakes, paying reparations to the Filipino people, and ensuring justice for victims of heinous crimes committed by their own personnel, we have the American authorities repeatedly resorting to the VFA to evade accountability," Bello added.

Bello explained that the VFA has become a major weakness of the Philippine government that the US government exploits.

"The US government will use whatever legal loopholes to their advantage. They will push the people around to protect their own interests. We have seen them do that in the instance of the "Nicole" rape case, the USS Guardian's destruction of the Tubbataha reef, the hazardous waste dumping by US navy contractor Glen Defense Marine Asia, and we see that again now with the murder of Jennifer Laude," Bello said.

• The US Special Forces’ base in Zamboanga, and the engagement of US troops in combat operations in the area;

• the dumping of hazardous waste into Subic Bay by Glen Defense Marine Asia in 2012, where Glen Defense was a US Navy contractor that provided logistical support to US Navy vessels pursuant to the provisions of the VFA;

• the January 2013 incident where the USS Guardian ran aground the Tubbataha Reefs that resulted into massive destruction, for which the US has yet to pay fines worth at least PhP 58.3 M or US $1.4 M; and,

• the violent murder of Jennifer Laude in Olongapo early this month.

"The US will be brazen about their violations because they know they can get away with it," Bello added.

For Bello, the key to getting the US government to account is for Congress to put its foot down, and terminate the VFA.

"Enough is enough. The Lower House and the Senate are protecting the Filipino people, the people we represent in office, the people whose rights and dignity have been continuously violated by the US military, by terminating the VFA," Bello said.

"The VFA is an agreement that hands our resources, our sovereignty, and our people's dignity to the United States on a silver platter. Thus far, the VFA has been used to free American military from any responsibility for all of their transgressions. And we can be sure that the Americans will continue to treat the VFA in that way. Clearly, the VFA has done more harm than good and it has got to end," Bello said.

Tragedy of a nation

For Bello, the Jennifer Laude case represents a tragedy of the nation that can spur Congress to action.

"Jennifer Laude suffered a crime of hate and died a violent death in the hands of Pemberton. Pemberton continues to be under American custody, while enjoying the comforts of his detention cell within the headquarters of the Philippine Armed Forces. Every effort of Jennifer's family to achieve justice is thwarted by the VFA," Bello said.

"The Laude Family's tragedy is our tragedy as a nation. The government's inability to protect the Filipino people from the actions of the US military is glaring," Bello continued.

Bello said that the only way to turn things around is by finally leaving US authorities with nothing to shield their irresponsible military from the full force of Philippine laws by terminating the VFA.

"The only way we can push back at the US government is to take from them that which protects their men from accountability. By terminating the VFA, we leave American authorities with no option but to submit their personnel to the Philippine government, to be made accountable for the heinous crimes they committed on Philippine soil."

He added, "If the US chooses to withdraw its troops owing to the absence of the VFA, so be it. The US has anyway made it clear they do not include our territories in the West Philippine Sea as areas they will defend."

"Our colleagues in Congress and the Senate have indicated their strong condemnation of Jennifer Laude's murder. The circumstances have jolted the nation awake to the tragedy of the VFA. And I am confident that we can bring the resolution to second reading at the Congress plenary in a very short time," Bello concluded.

This is the second joint resolution of Akbayan Rep. Walden Bello and Senator Miriam Defensor- Santiago seeking to terminate the VFA. In the 15th congress the lawmakers filed a similar resolution to protect the Filipino people from the atrocities of the US military.