We held another drone information stall yesterday in Wrexham.

See also this indymedia report and photos from a previous stall and this recent protest at RAF Waddington from where British armed Reaper drones will be controlled. 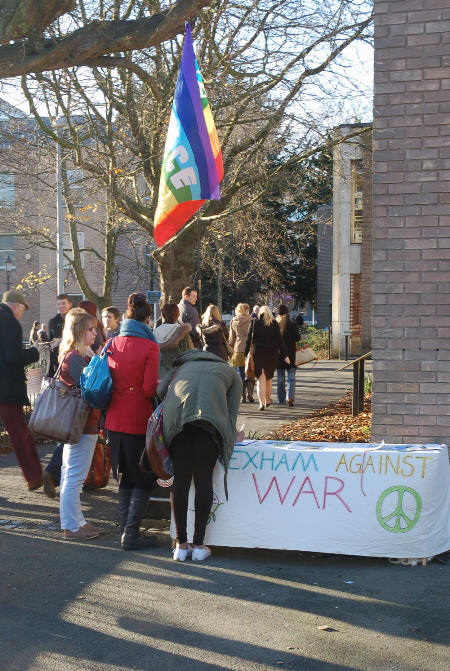 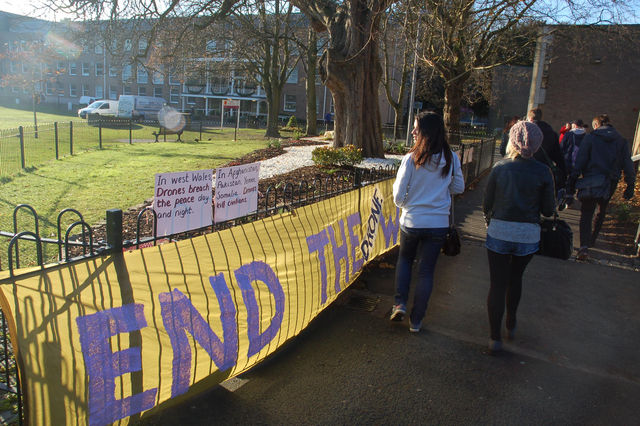 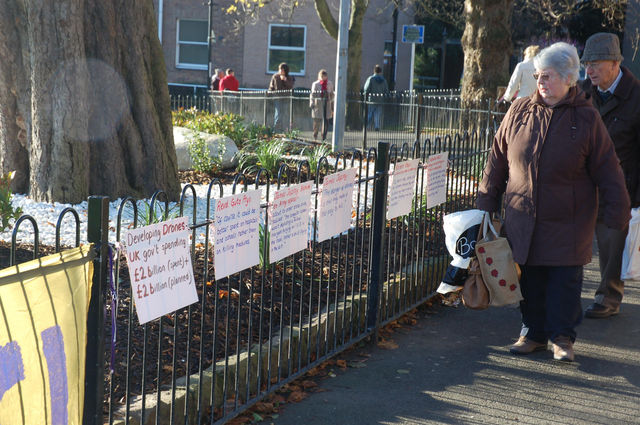 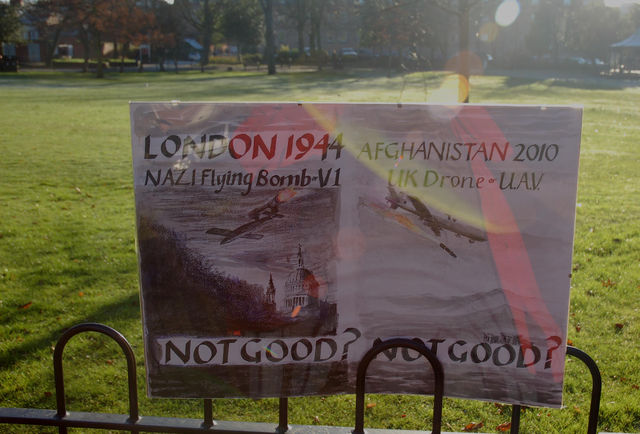 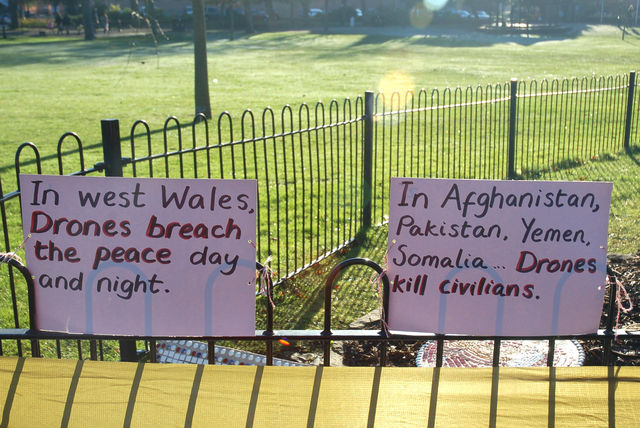 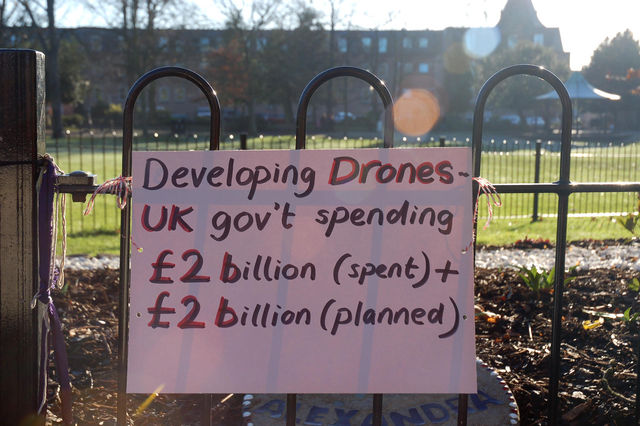 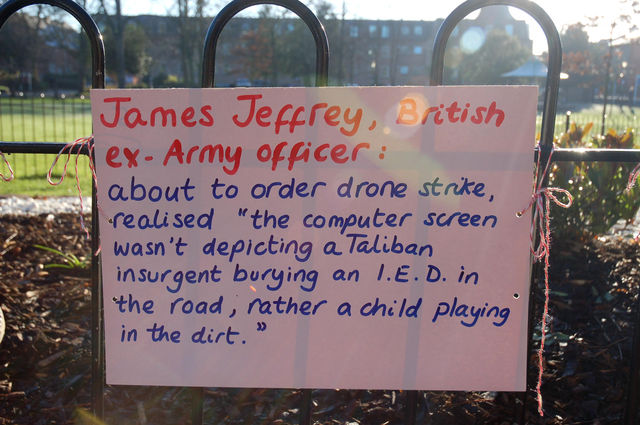 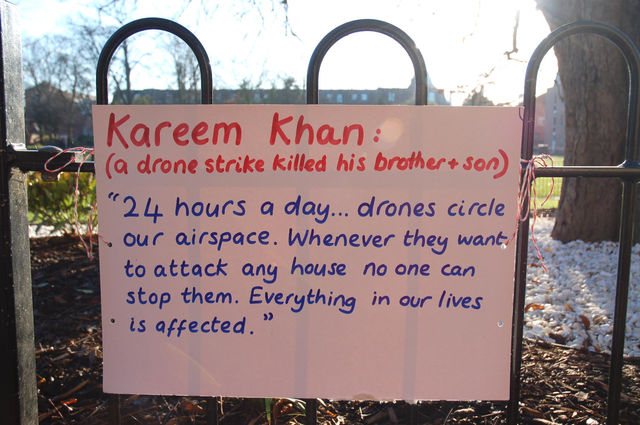 As MPs in London prepared to debate British involvement in drone warfare, members of Wrexham Peace & Justice Forum held an information stall about drones - unmanned aerial vehicles or UAVs - outside the library in Wrexham yesterday lunchtime, 11 December. Hundreds of leaflets containing information about drones were handed out to passing shoppers, workers and many Yale College students.

Two of the leaflets focused on Welsh concerns over drones [1]. Drones are being developed and tested at Parc Aberporth. The airspace above 40,000 people living in 500 sq miles of West Wales between Aberporth and Epynt Mountain has been designated a UAV test flight zone. For instance, the UK/Israeli Watchkeeper drones, over 50 of which are being built for British use, are being tested at Aberporth. There are serious concerns about safety as drones have already crashed within this area and residents are disturbed day and night by the drones' high pitched whining. Aberporth residents have dubbed the town "the buzz box". Millions of pounds worth of Welsh Assembly and other government funding have been pumped into Aberporth, with promises of hundreds of jobs that never materialised. Although the development was billed as concentrating on civilian uses for drones (including surveillance, which is also highly controversial), it has been admitted that almost all the 39 workers at Aberporth are engaged on military projects.

"We believe that there is no space for drones in Wales. Wales has a long tradition of pacifism, and we want constructive and sustainable jobs rather than have to work in the aerospace industry that devours resources and propagates militarism."

Other leaflets distributed were produced by the Drone Campaign Network [2]; these focus on the use of armed drones for extra-judicial killings in countries such as Afghanistan, Pakistan, Yemen and Somalia, the many civilian victims of drone strikes in these countries and the fact that, far from keeping the peace and improving security, drones are in fact fuelling resentment and conflict wherever they are used.

WPJF displayed a large banner 'END THE DRONE WARS', along with placards sharing information about drones and a peace flag [3]. We also collected signatures on a Drone Campaign Network petition [4] calling for the British government to 'lift the veil on the drone war':

"We call on UK government to end the secrecy surrounding the use of British drones in Afghanistan and to release all necessary information for a proper public debate. This should include the reasons for individual drone strikes and the number of people killed."

"We shared information about the threat to life and liberty posed by the use of unmanned aerial vehicles (drones) in Wales and around the world. The testing of drones in west Wales is both a nuisance and a danger to those living under the fly zone. As Cymdeithas y Cymod points out, Wales has a long history of pacifism and the WAG should never have invested in bringing drone technology to Aberporth.

"The use of drones for extra-judicial killing amounts to terrorism and Britain's claim that only four civilians have been killed by British drones in hundreds of strikes in Afghanistan is simply not credible [5]. If we want to see peace, we need to act to end the drone wars now."

Lift the Veil on the Drone War