at the start of the march there were up to ten thousand students from all over the country - directed on an agreed route to kennington park in south london (hardly the seat of government), barely a thousand made it as far as the rally which then ended in chaos as NUS president liam burns was pelted with eggs as some activists invaded the stage. 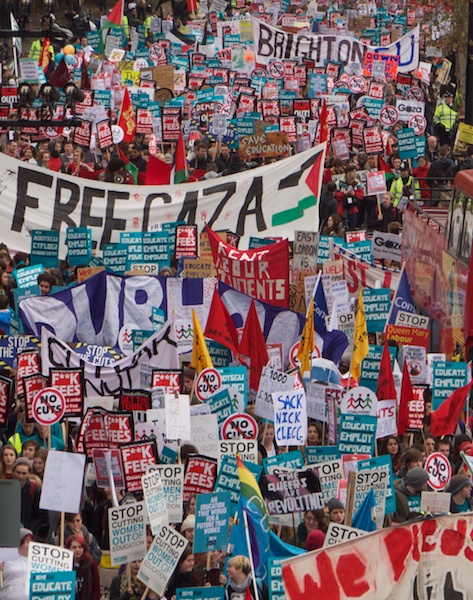 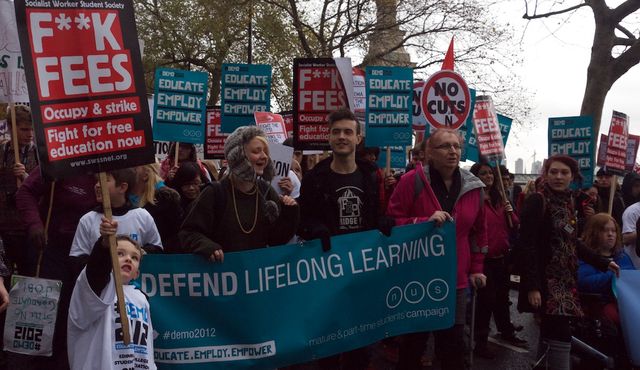 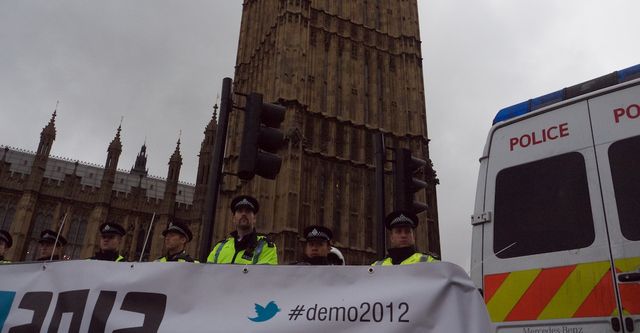 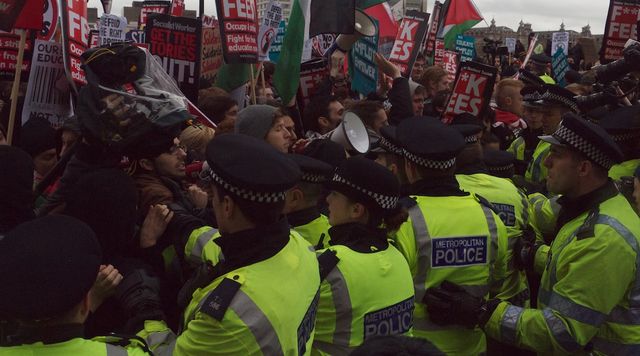 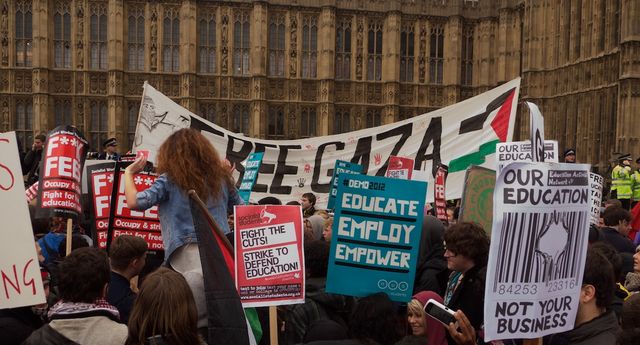 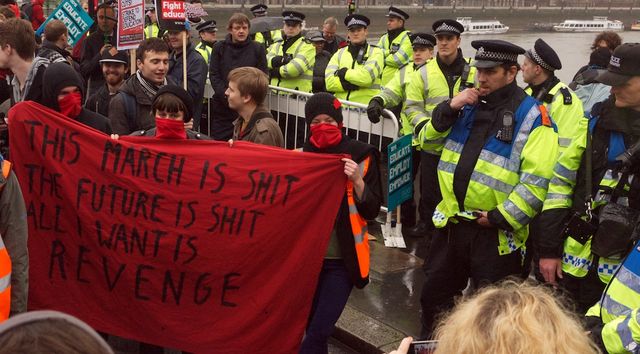 thought for the day 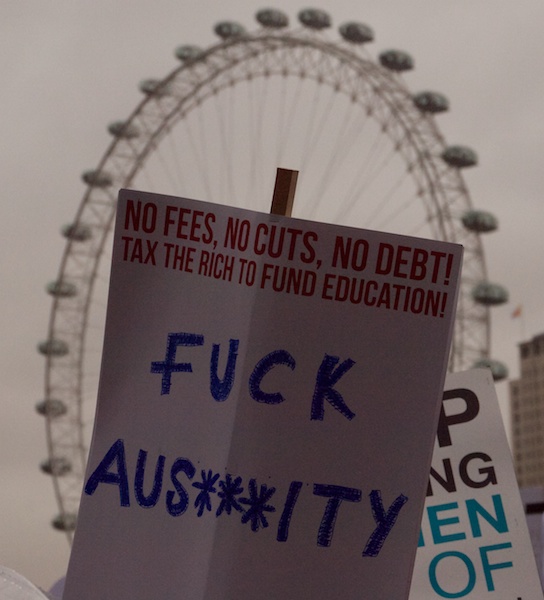 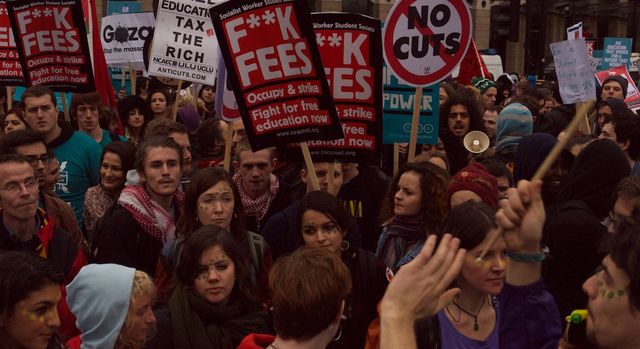 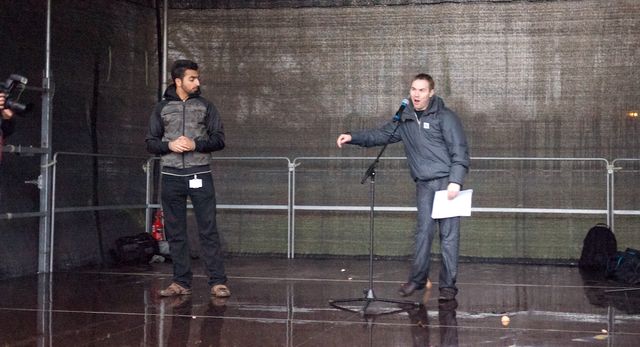 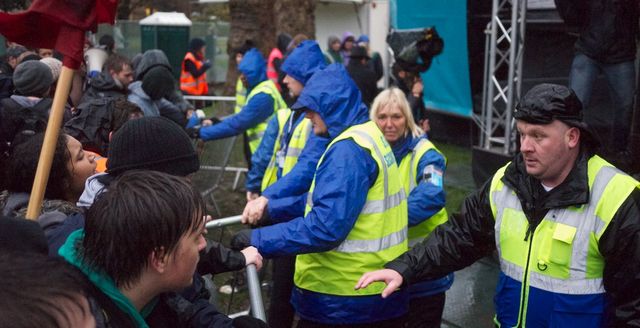 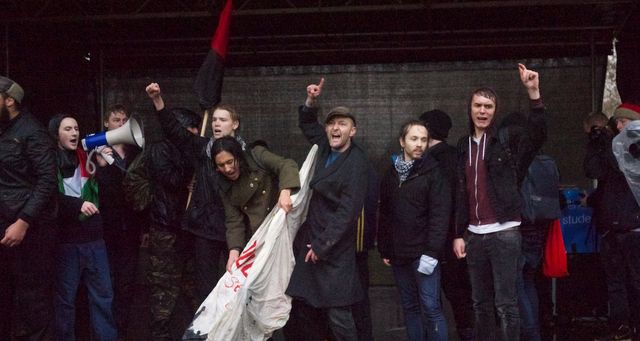 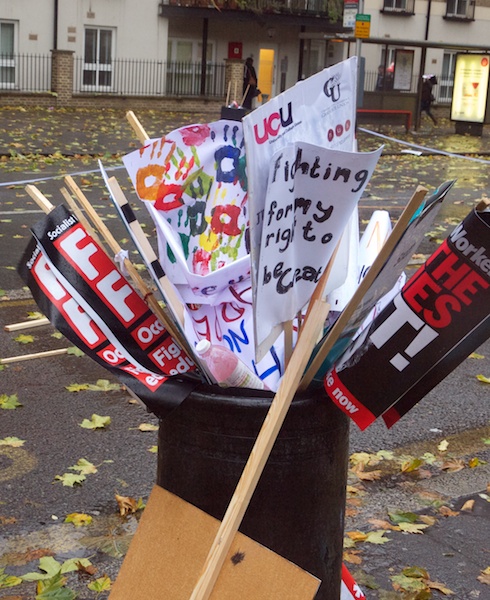 the students, many bussed in from around the country, assembled this morning at temple park on the embankment, and then shortly after midday they headed west. despite the fact that parliament square was not on the route, the palace of westminster was protected by double fencing boxes weighed down by sandbags, and hundreds of police mounted an operation which included very visible horses, to discourage and prevent any students from diverting to whitehall or parliament square.

the same box fences barred the way at westminster bridge road, and as the students marched past, several hundred broke out of the cordon and ran straight for the barricades where a few minor scuffles ensued. some police drew batons as protestors tried to dismantle one of the fences, and other lines of police briefly pushed protestors back.

the huge number of NUS stewards were anxiously instructing students to keep moving and to walk over westminster bridge away from the place where all the decisions about EMA, tuition fees, and education cuts, have been made. they wanted their peers to walk through the pouring rain to a rally a couple of miles away in a muddy park. many, unsurprisingly, didn't want to go.

there was a sit-down on the bridge, a samba band started playing on the westminster side, and progress was very very slow.

even along the route to the park, a large group had stopped under the railway bridge behind waterloo station, causing traffic chaos, enjoying the shelter, and making lots of noise, echoing under the bridge. still the stewards begged them to keep moving.

who are these unpaid police aids? senior stewards wired with earpieces and in direct communication with police, barking instructions to their teams, hiding behind the language of safety and inclusivity while helping the state to prevent any meaningful protest. and of course the baby-blue-tabarded police 'protest liaison' officers were also strongly represented, intruding into the crowd and engaging people in conversation, wired for sound while FIT teams filmed and photographed from a distance, collecting their intelligence and assessing the mood.

no wonder by the time the rally arrived at kennington park, there were less than a thousand left.

we've previously had protests banned from ending in rallies in royal parks because of the possible damage to the grass. but the grass in south london is clearly deemed far less important, and as the turf turned to mud under the trampling crowd, josie long (god bless her), took to the stage to try to uplift and entertain the sodden students, before introducing the first speakers.

union officials traipsed one after another on to the stage, speaking of winning the fight, of unity, of breaking the government, but not one of them calling for real action or a general strike.

a group of several dozen activists were intent on exposing the hypocrisy of these speakers, and heckled, called for that strike, shouted down the platitudes, and when liam burns, NUS president, took to the stage, they chanted "NUS, shame on you. where the fuck have you brought us to", and started pelting him with eggs, forcing him to dance around dodging them.

finally, a dozen or so tore down the barriers, and despite the heavy-handed efforts of private security, they occupied the stage, forcing liam burns to make a hasty exit. attempting to speak to the ever-diminishing crowd, they found the microphone instantly turned off, but with a loud-hailer, they exhorted people to ignore the police section 12 conditions in place and to join them marching back to westminster to make their voices heard in front of parliament.

the miserable weather, the fading light, the muddy park, and the lines of coaches ready to transport out-of-towners back home, all conspired to deflate the small revolution, and besides, parliament square was still locked down and classed as a "sterile area" by police who turned away the few students still in the area.

so the 2012 demo was once again made impotent by the state, helped by student organisers and union VIPs, and given a bare minimum of coverage by most of the media.

the majority of MPs still fiddle their expenses, while the poor and dispossessed suffer, and most of the the education system becomes a privatised, second-rate, money-spinner, with good education only available to the rich and the privileged. and the young face joblessness or menial slave labour disguised as workfare, while the companies they toil for pay no taxes. but at least they had their day of democracy, in a muddy park in south london.