G4S complicit in torture of children - Protest outside London HQ

Palestinian rights activists picketed the entrance of the security firm G4S' headquarters in London on Friday 12th October to protest at the company's complicity in the torture and caging of Palestinian children. Photo report. 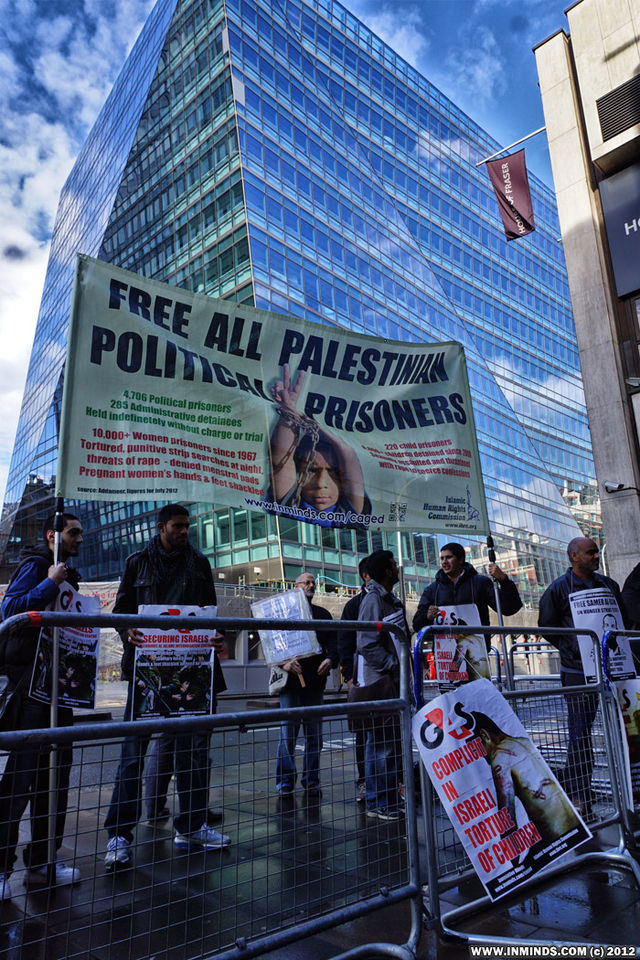 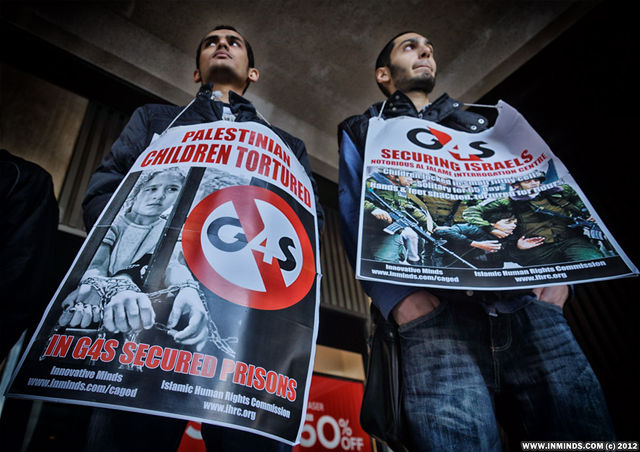 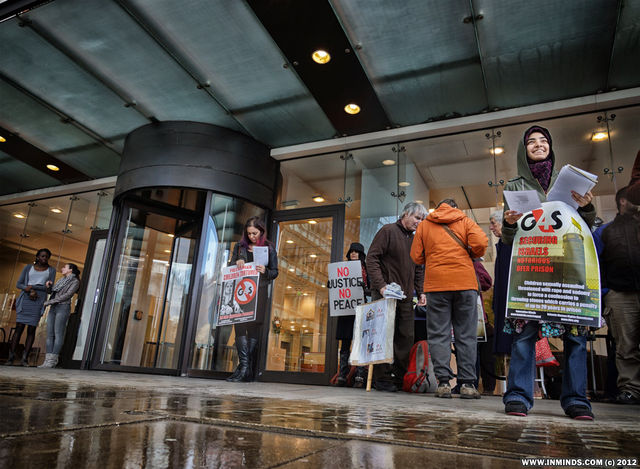 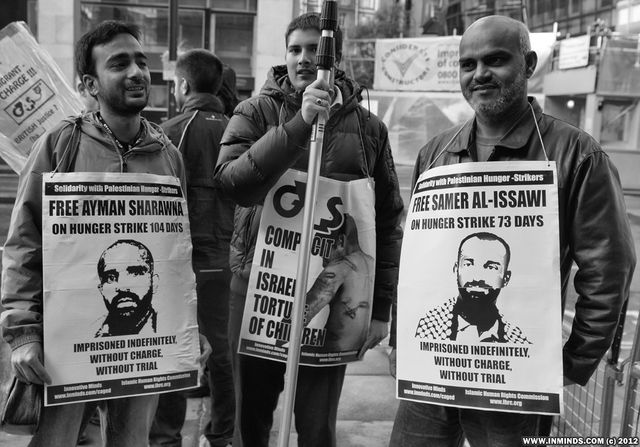 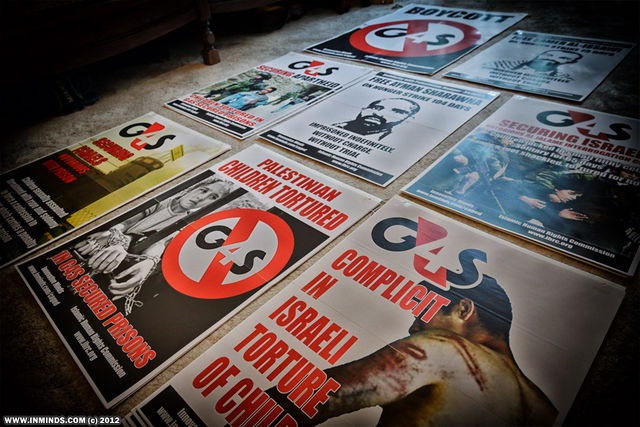 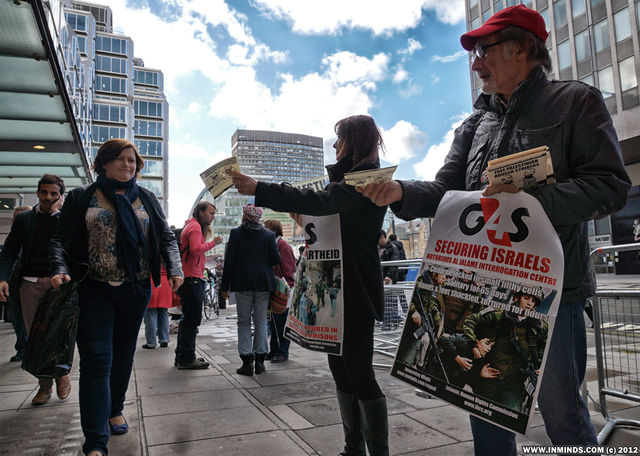 The British-Danish security firm G4S is providing security systems to help Israel secure prisons and interrogation centres both in the West Bank and in Israel where Palestinian children are being caged and tortured.

These include Ofer prison in the occupied territory where G4S provides the perimeter defense system and the central command control room for the entire facility, and the notorious Al Jalame interrogation centre in northern Israel with its infamous Cell 36 where Defence for Children International reported children are locked in small filthy cells in solitary confinement, some for 65 days, with their only escape being the interrogation room where they are shackled by their hands and feet to a chair whilst being abused, sometimes for hours. G4S provides the security system that keep this torture den operational.

The transfer of Palestinian prisoners from the West Bank to prisons in Israel violates of articles 76, 66 and 49 of the Fourth Geneva Convention, G4S is complicit in this violation.

http://ihrc.org ) coming together as the Palestinian Prisoners Campaign Group which culminated out of this years Al Quds Day.

G4S also provides services and equipment to help underpin Israel's illegal occupation. It provides security systems and services to illegal Israeli settlements and checkpoints which make up the networks of apartheid walls and barriers. These include the the Qalandia checkpoint, the Bethlehem checkpoint and the Irtah (Sha’ar Efraim) checkpoint where G4S provides and maintains full body scanners and luggage scanners. It equips Israel's police headquarters in the West Bank and is the preferred bidder for Israel's Police Academy.

Despite it being a weekday we had a great turnout with well over 40 people attending, some having specially taken the day off work in order to come and protest at G4S's crimes. We also had some activists from the Justice for Jimmy Mubenga campaign who had been protesting outside G4S earlier in the afternoon as part of a day of action to mark the the two-year anniversary of the death of Jimmy Mubenga, the 46-year-old Angolan migrant who died in 2010 at the hands of G4S security guards. There was great unity between the different campaigns against G4S. We took each others leaflets and combined them with our own to give out together.

With over 30 placards and banners specifically produced for the day the message was very clear for the public to see. We did not encounter a single person who was not sympathetic towards the campaign. Many people were visibly shocked to hear of the torture of children by Israel and G4S's complicity in this heinous crime. One gentleman who had stopped to look at the placards just shook his head in shock "how could they, how could anyone do such things to a child". Another member of the public was so moved that she decided there and then to join the protest, many others wanted to know details of the next protest so then could also come and show their disdain at Israel's crimes and G4S's complicity in them.

Although the police tried to prevent us from entering the building we managed to get to the fifth floor to deliver a sharp rebuking letter addressed to G4S chief executive Nick Buckles. The police had set up pens to contain the protest, we largely ignored them and instead spread out along the entire length of the street to be effective in handing out leaflets. With over a thousand leaflets being given out the protest was a great success.

The british weather did at point turn on us, transforming the sunny afternoon in to a very wet one with a torrid of rain. We didn't let that hinder our work and continued leafleting with wet placards.

Solidarity with the hunger strikers

Both men were released as part of the Shalit swap deal Israel made, but once Israeli soldier Shalit was released Israel reneged on the deal and re-arrested both men. Both been imprisoned under Israel's infamous 'administrative detention' which means they have not been charged with anything and there is no trial and yet they have been locked up indefinitely on a rolling 6 month prison sentence. Lawyers visiting the two hunger strikers on 8th October said their health is rapidly deteriorating and immediate intervention is needed to save their lives.

Israeli doctors are trying to pressure Ayman al-Sharawna by withholding his needed medication until he agrees to end his hunger strike. He has lost vision in his right eye and has lost sensation in all parts of his body and has been vomiting blood. Some reports have suggested he may be in a comma, with Israel preventing his family or doctors from visiting him its very difficult to ascertain his condition . Samir al-Issawi, suffers from dizziness, permanent headache and several chronic diseases. The Israeli prison service is refusing to transfer him to the prisons medical centre for treatment.

Up coming protests in solidarity with Palestinian prisons:

When: Sunday 28th October @ 2-4pm
Where: Outside Parliament

Israel has always targeted Palestinian democracy understanding that the Palestinian people, unlike their installed stooges, will never capitulate to the occupation of their land and demand their right of return. So when Hamas won the elections in 2006 with 70 MPs in the 132 seat parliament, Israel reacted with mass arrests and imprisonment of Palestinian MPs. As recently as 2009 nearly a third of the Palestinian Parliament was languishing in Israeli prisons and today there are still 13 imprisoned Palestinian MPs. We will be highlighting their plight outside the British Parliament. Come and join us to voice your support for imprisoned Palestinian parliamentarians.

We will be keeping up the pressure on G4S with frequent protests outside their door, the next one will be in four weeks time.

More details of each protest will be published closer to the time.