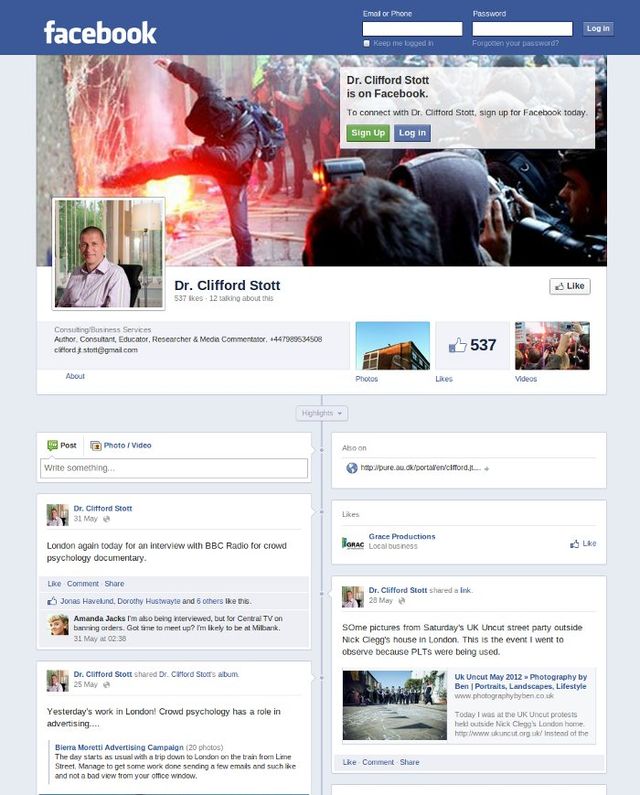 Sussex police have recently started to use new forms of repressive tactics for policing demonstrations. They seem to have taken a break from head cracking to trial what they have termed 'Police Liaison Officers' or PLOs at the recent Smash EDO demonstration on June 4th. This may not be simply a new fad by the cops, but could be part of a new era of repression based on the relatively new 'science' of crowd psychology. The PLOs are the brainchild of Dr. Clifford Stott, a crowd psychologist working with the cops to 'manage' crowds. This man was seen at the Smash EDO demo wearing a blue observer vest, presumably to check up on his PLOs he'd just trained.

He tweeted this last week just before the Smash EDO demo A brilliant few days creating PLTs in Sussex. A long way to go but a rubicon has been crossed. Helping secure ECHR based approaches!

The Sussex Police PLOs are predominately female, and use a nicey-nicey approach to try and create the illusion that they are the "good" people and on our side. On top of this, Graham Bartlett, the local police chief has "praised" Smash EDO for their good behaviour.

Crowd psychology seeks to pacify social movements by creating a situation where the crowd 'self polices'. The following is a description of how this could be used in practice by leading crowd psychologists:

"using a 'dialogue police' unit, whose officers work before, during and after risky situations to communicate with radical groups and getting the crowd to “self-police” by actively undermining those trying to initiate “trouble” or at the very least making it easier for the cops to deal with them."

This is almost exactly what we saw at the recent Smash EDO demo.

After the riots it seems the police are finding new and invidious ways to keep us in our place, which is leading to a new form of policing where police are integrated into the crowd, not as undercovers, as they have been previously, but as part of it. Crowd psychology, if it takes off, may result in a form of repression which is more dangerous to social movements than water cannon or rubber bullets, as it creates a situation where the public become more sympathetic to the police than to those facing repression. On top of that, PLOs suck the energy and solidarity away from the people on the streets. What is clear is we need to make sure we do not allow our demonstrations to be infiltrated by the police in this way and we make sure they are not welcome. Once we allow them to be part of our demos in this way we have already lost, as it will be the cops and not us calling the shots.

The use of this new tactic shows us the cops are out of their depth and cannot deal with the new wave of social unrest sweeping the UK in recent years. To beat them at their game we have to stay one step ahead of them by understanding these tactics and what they mean for us before they are truly put to use.

You can see more about Dr. Clifford Stott and his theories here: