"Occupy Melbourne" tents outsmart & give chase to Victorian Police.
As in Brisbane and Sydney police repsonse to the Occupy movement has been brutal.
The Victorian cops were not expecting this reponse as the came to confiscate 3 tents
VID

"Occupy Melbourne" tents outsmart & give chase to Victorian Police.
As in Brisbane and Sydney state police response to the Occupy movement has been brutal.
The Victorian cops were not expecting this reponse as the came to confiscate 3 tents 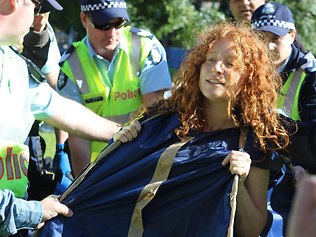 A day after the video of Occupy Melbourne “Tent Monsters” went viral, revealing the absurdity of the Melbourne City Council and police harassment of Occupy Melbourne, the authorities have responded with another display of brutality. As if offended by the display of non-violent creative resistance police and council officers today stripped “Tent Monster” Sarah of her the tent she was wearing as her clothes. Despite being repeatedly told she was not wearing any clothes other than the tent, it was removed with some violence, leaving her only clad in her underwear in a public park.

A number of disturbing questions arise from this incident. Firstly, on the surface it appears to be a fairly straight forward case of sexual assault. Removing someone’s clothes in public, forcefully and without their consent, when they pose no threat to others, is by definition assault. When Sarah tried to report a complaint on site she was dismissed by the officers present. Sarah has subsequently made a complaint to the Police Ethical Standards Department

Secondly, the role of the Melbourne City Council Officers present is very disturbing. One of the officers present, a woman, can be seen in this video wearing a “Parking and Traffic” vest. The Herald Sun reports “The footage appears to show a council worker being handed a knife by police to cut the tent from the woman”. In other words, this parking inspector, was directly involved in the stripping of Sarah and used a knife in the process!

This appears to directly contradict the ASU’s official position on the protest. As reported on Indymedia earlier:

Igor Grattan, Assistant Secretary of the Victoria/Tasmania Branch of the Australian Services Union, which services council by-laws officers and cleaners, supported Occupy Melbourne: “People have the right to protest and should be allowed to do so. The way that it is being done [the actions of the City of Melbourne against the protesters] is abhorrent to our freedom and the right to protest. The protesters are not violent and should be allowed to protest.” He stated that his members are advised not to remove items from the occupied site if this brought them into conflict with protesters. He said that by law, council employees and contractors cannot commence industrial action on this issue. However, ASU members will be advised that in such circumstances (ie direct conflict with protesters) they should stand back on the grounds of occupational health and safety, he said

I intend to approach the ASU for comment on this situation and would encourage others to call their office to ask on 9342 1400.

The other Council officer present, appears to be the Senior officer present when Notices to Comply are issued. This video in the first 30 seconds shows him clearly laying hands on Sarah when he grabs her “tent dress”. What authorization does this man have to grab people? I would suggest none and I would suggest this is again a case of assault.

Thirdly, why was the decision made to strip and publicaly humiliate Sarah for refusing to remove her “tent dress”. If she was not cooperating with police and the council officers, why was she not arrested for “Hindering a council officer”, like so many protestors in the last few weeks. She could have been arrested, placed in a divisional van, whilst still wearing her “tent dress” and then disrobed by female police officers. Instead all of this was done roughly and in full public view.

Sarah and the other Occupiers in Melbourne are struggling against constant harassment by the State with humour, dignity and persistence to create a space where a just and more peaceful world can be discussed and planned. The actions of Sarah and others in their non-violent discipline is helping to expose the brutality of the state and its lack of tolerance of public dissent.