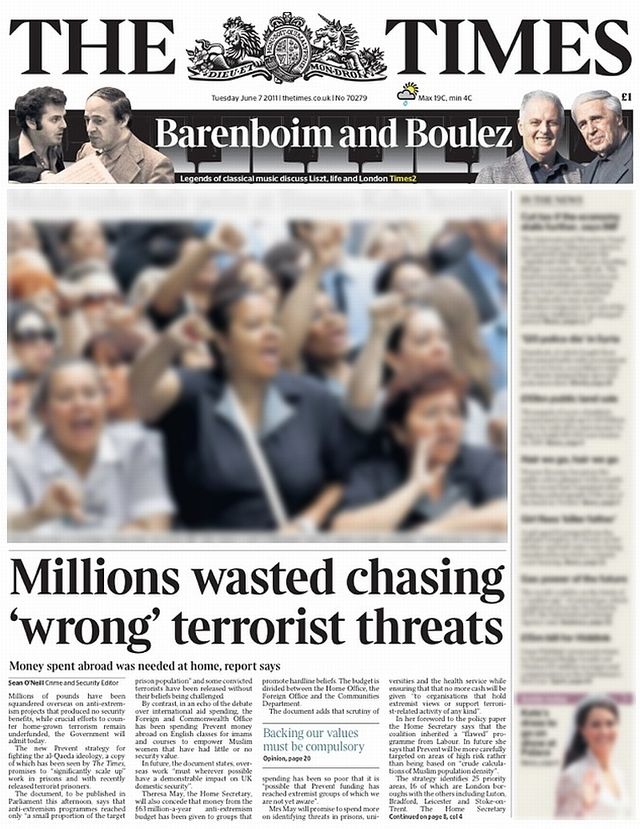 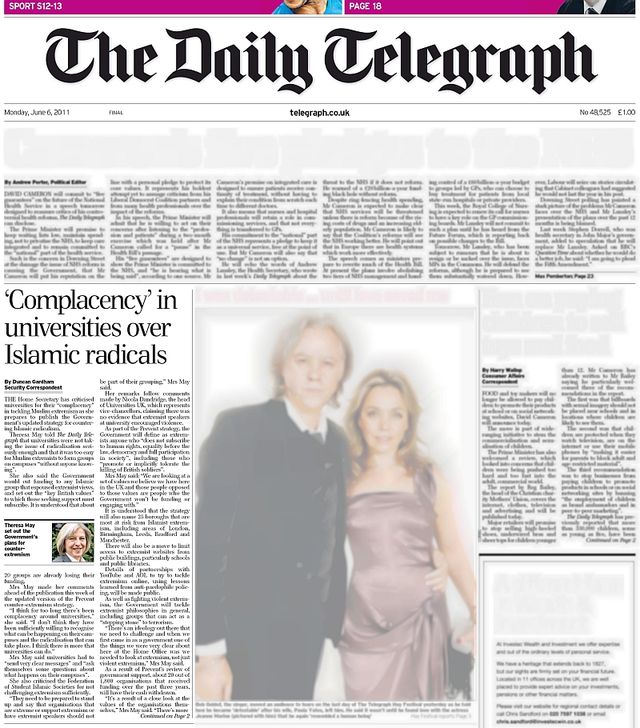 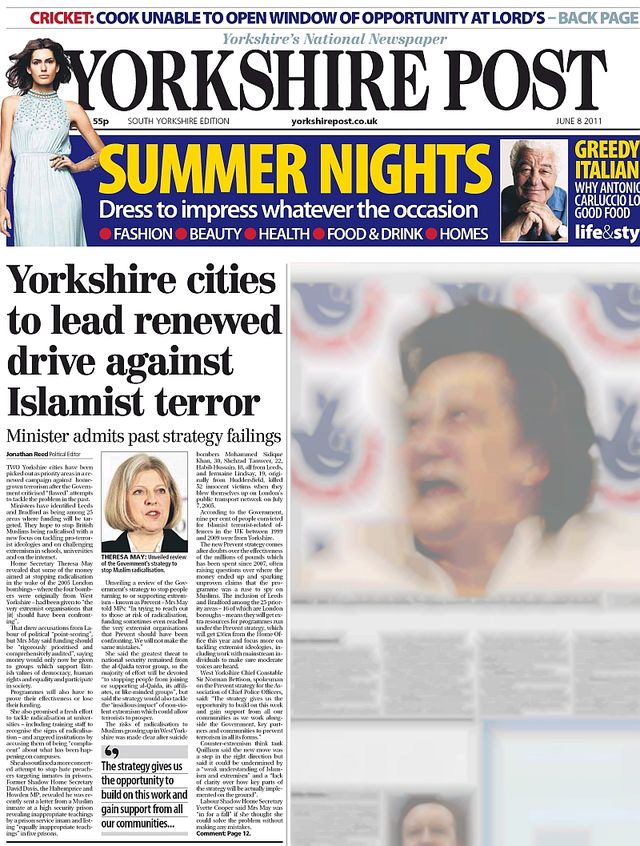 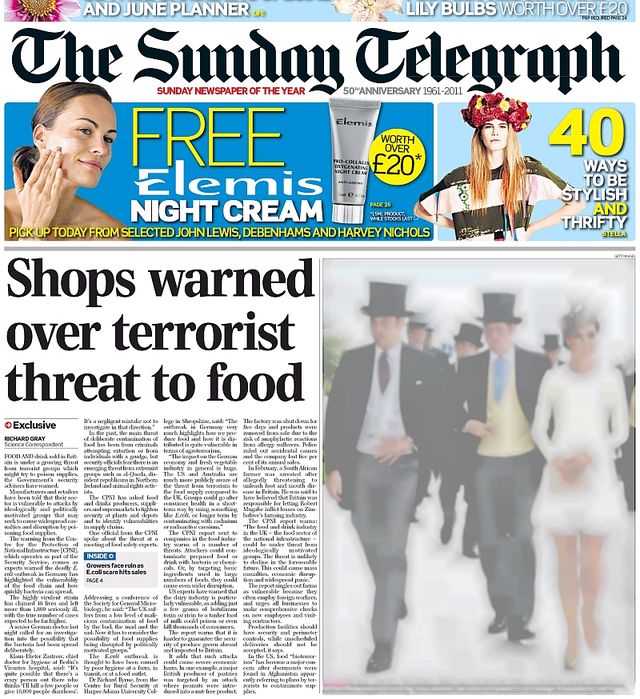 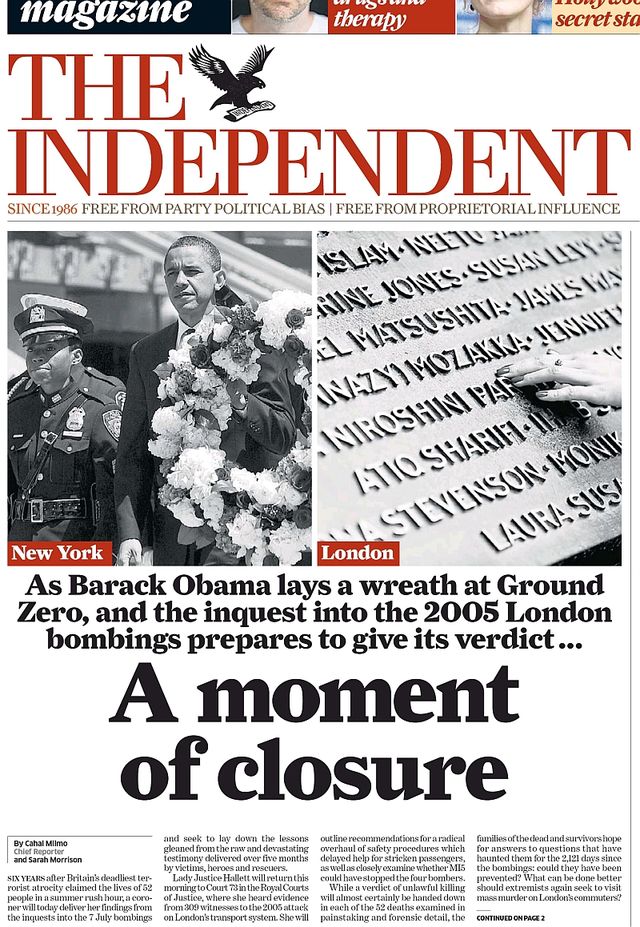 
“Intelligence indicates that a terrorist attack in our country is ‘highly likely’. Experience tells us that the threat comes not just from foreign nationals but also from terrorists born and bred in Britain. It is therefore vital that our counter-terrorism strategy contains a plan to prevent radicalisation and stop would-be terrorists from committing mass murder. Osama bin Laden may be dead, but the threat from Al Qa’ida inspired terrorism is not.” [1]

“Millions of pounds have been squandered overseas on anti-extremism projects that produced no security benefits, while crucial efforts to counter home-grown terrorism remain underfunded, the [British] Government will admit today.” [2]

“The new Prevent [counter-terrorism strategy] [...] makes clear that there will be no more ungoverned spaces — particularly in higher and further education, in the NHS [Britain’s National Health Service] and the charities sector. To this end the review imposes a duty of care on universities to safeguard students, staff, and the wider community from dangerous radicals. [...] [T]he Preventing Extremism Unit within the Department for Education is seen by many as a role model” [3]


“[Britain’s Interior Minister] Theresa May told The Daily Telegraph that universities were not taking the issue of radicalisation seriously enough and that it was too easy for Muslim extremists to form groups on campuses “without anyone knowing”. [...]

Mrs May made her comments ahead of the publication this week of the updated version of the Prevent counter-terrorism strategy.

“I think for too long there’s been complacency around universities,” she said. “I don’t think they have been sufficiently willing to recognise what can be happening on their campuses and the radicalisation that can take place. I think there is more that universities can do.”

Mrs May said universities had to “send very clear messages” and “ask themselves some questions about what happens on their campuses”. [...]

As part of the Prevent [counter-terrorism] strategy, the [British] Government will define as extremists anyone who “does not subscribe to human rights, equality before the law, democracy and full participation in society”, including those who “promote or implicitly tolerate the killing of British soldiers”. ” [4]


“[London’s] Metropolitan Police is to issue all its firearms officers with the type of ammunition used to kill Jean Charles De Menezes. Hollow point bullets flatten and widen on impact, causing maximum damage to vital organs. [..] Mr De Menezes, a Brazillian falsely identified as a suicide bomber, was shot dead in 2005 with hollow point bullets.” [5]

“Britain's most senior police officer has defended issuing bullets similar to so-called dum dum ammunition as standard to Scotland Yard marksmen. Sir Paul Stephenson said the hollow-point bullets were chosen by his force after a series of trials because they were less likely to pass through a body and hit an innocent passer-by. [...]

The Metropolitan Police Commissioner told LBC radio that the reasons behind the decision were “not for the squeamish”, adding that the bullet “reduces the potential of collateral damage”. [...] “The reality is we think it's appropriate.” ” [6]

[3] The Prevent test for Islamists is just fair play (*)

Commitment to our values should be compulsory. We cannot tolerate intolerance

[4] 'Complacency’ in universities over Islamic radicals (*)


Remarks by the President to Parliament in London, United Kingdom

Not just special, but an essential relationship (*)

Prime Minister David Cameron and US President Barack Obama have written a joint article for the Times at the start of the US State Visit to the UK.


Prime Minister: “While Bin Laden is gone, the threat of Al Qaeda remains”

Prime Minister David Cameron delivered a statement to the House of Commons on the death of Osama Bin Laden and wider counter-terrorism issues.

Number10.gov.uk (the official website of the UK Prime Minister's Office), 3 May 2011

Department for Education, May 2011

Prime Minister David Cameron has delivered a speech setting out his view on radicalisation and Islamist extremism.

Produced in partnership with the Association of Chief Police Officers

Food and drink sold in Britain is under a growing threat from terrorist groups which might try to poison supplies, the Government’s security advisers have warned.

A moment of closure for victims of terror (*)

As Barack Obama lays a wreath at Ground Zero, and the inquest into the 2005 London bombings prepares to give its verdict...

by Cahal Milmo and Sarah Morrison, The Independent, 6 May 2011

The Anglo-American relationship: Vision of a war without end
Obama's visit. Part II

Obama's UK-fest : Vision of a war without end

by Felicity Arbuthnot, Global Research, 31 May 2011


UK Foreign Minister: We will continue to fight against terrorism wherever it rears its head

WikiLeaks: London is a hub of al-Qaeda’s global terrorism network

MI5: Our ‘regret’ over failing to prevent 7/7 bombings