Sarah Colborne, Director of the Palestine Solidarity Campaign, lent her invaluable presence and Mick Napier, Chair of Scottish PSC, travelled all the way down from Scotland to show his solidarity. Activists from Devon also attended.

Ahava’s landlord announced in March that they will not renew the shop’s lease when it comes up for renewal in September as the result of the fortnightly protests and other actions that have been ongoing for the past two years.

John, our saxophonist, also helped draw people’s attention to the BDS campaign, as well as entertained everyone on Monmouth Street. 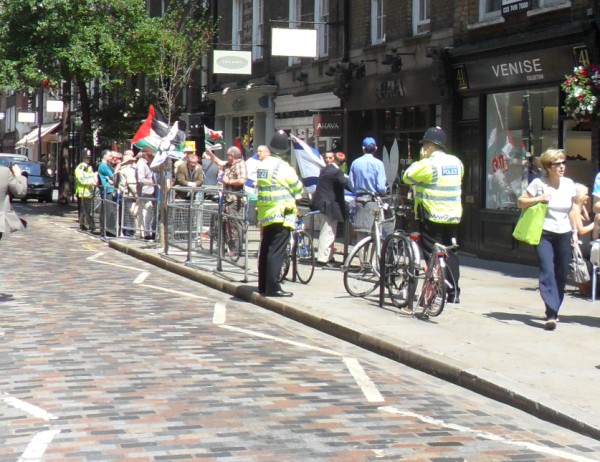 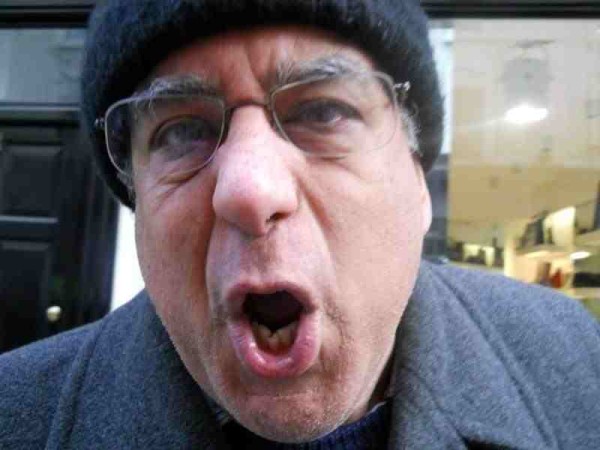 Jonathon 'I Hope You Die' Hoffman 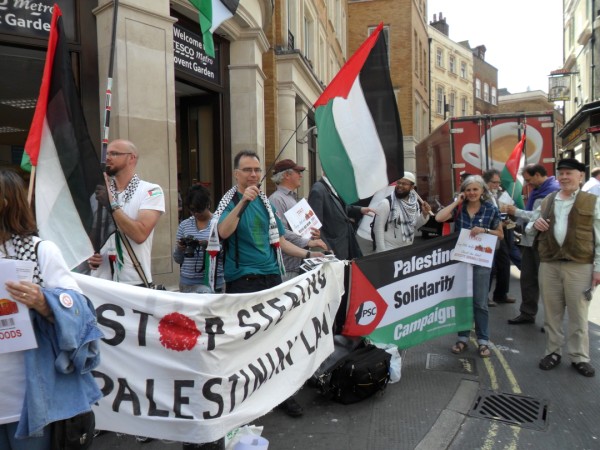 Campaigners of all backgrounds spent an hour distributing flyers and talking to passers-by about the illegal Israeli occupation of Palestinian territory, theft of natural resources, oppression of the Palestinian people and continuous violations of international law by the racist Zionist state.

There were several Palestinian flags, as well as a banner from the Palestine Solidarity Campaign and also one that read “Stop Stealing Palestinian Land.”

Counter-protesters included three Zionists and one Welsh supporter. For some reason and with dubious legality, police forced both protestors and counter protestors into separate pens which only served to underscore the huge disparity in numbers.

The Welsh supporter brought along several Welsh flags that overshadowed the two Israeli flags that the Zionists brought. In fact, few people mistook the Welsh flags for Palestinian ones, since both share similar colours.

Demonstrators again received outstanding support from the public. A few passers-by overtly expressed their outrage and disgust at Israel’s actions, loudly arguing with and scolding the few counter-protesters present.

The Zionists and their lone Welsh supporter shrilled happily whenever the few customers entered the Ahava shop (probably out of curiosity) and emerged – as most did, without making a single purchase.

However, for Ahava, lack of custom is no problem, as it is now common knowledge that ‘the little shop of horrors’ on Monmouth Street has made a huge loss of over £250,000 and is heavily subsidised indirectly by the Apartheid Zionist government.

Jonathan Hoffman, Co Vice-Chair of the UK Zionist Federation, promoted Zionism in his own inimatable way by continuously screaming at one human rights campaigner, “I hope you die!”

At the BICOM “We Believe in Israel” conference held recently in London, inside sources reported that one delegate said, referring to Hoffman, “I’d rather clean a dog’s mess out of the kerb with my bare hands than have anything to do with him.”

Other Zionists generally share the same dire opinion of the Co Vice-Chair of the Zionist Federation. Palestine campaigners, on the other hand, see Hoffman as a valuable asset, helping to discredit Zionism in both the UK and abroad.

Surprisingly in 2009, several human rights campaigners even started a successful ‘Defend Jonathan Hoffman Campaign’ when the Zionist Federation Executive and Board of Deputies were starting to close ranks against him.

Keep up the good work Jonathan!

After an hour outside Ahava, campaigners packed up and paraded past the Fountain Bar, (whose Tel-Aviv Summer Bash party was terminated on May 29th due to the outrageous behaviour of the Israeli and Zionist crowd) and through Covent Garden to the nearby TESCO supermarket on Bedford Street.

TESCO, the UK’s largest supermarket chain, sells fruit, vegetables, dates, flowers and herbs imported to the UK by Carmel Agrexco, which exports 70% of the agricultural produce from illegal Israeli settlements on Palestinian land and misleads consumers by labeling these as ‘produce of Israel.’

Activists unfurled a banner, spoke to and distributed specially-produced flyers to customers entering and leaving, asking them to ‘check the label’ and boycott Israeli and illegal West Bank settlement produce, including Israeli Jaffa Oranges. Buying these goods grown on stolen land, supports an apartheid government which flouts international law and is responsible for the suffering and deaths of thousands upon thousands of people.

The two Zionists and their Welsh flag-waving supporter were soon joined by two other Zionists, one of who enjoys taking photographs of human rights campaigners at very close range. As a result, police were called to investigate an incident that was eventually resolved without arrest.

Another Zionist attempted to give away Israeli Apartheid Jaffa Oranges to passers-by, but without any success.

It seems without doubt, that people are starting to get the message.