Yesterday 4 campaigners were arrested as work was stopped at Shell's compound in Aughoose for over 7 hours. In a damning sequence of events, Gardaí continue to use inappropriate and unsafe methods to police the protests. 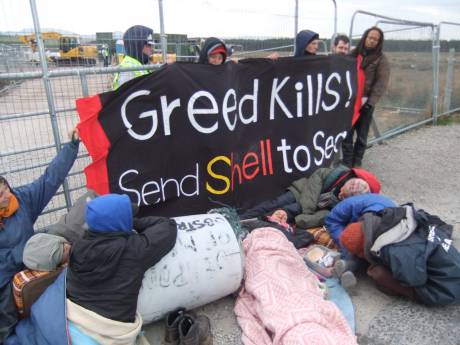 At 7am yesterday, two people from the Rossport Solidarity camp locked their arms together inside a plastic and concrete barrel, which had been placed directly in front of the gates of of the Shell compound. This was eventually removed by 1pm by the Garda protest removal team. Following the removal of the lock-on, a tractor bringing borehole drilling rig to the Shell compound was stopped and two people climbed up on the tractor cab and the borehole drilling rig.

The Gardaí who had been mostly calm during the lock-on, became very aggressive and reckless, immediately climbing on the borehole drilling rig and dragging one of the people down in a dangerous and foreful manner. The second person who was on the tractor cab was taken down about 30 minutes later again in a dangerous manner by having her hands handcuffed and her legs cable-tied and then being handed down a ladder by Gardaí. None of the Gardaí involved wore any ropes, harnesses or any safety equipment.

This way of bringing people down from heights is in marked contrast with the way that some Gardaí admitted that protesters should be taken down in the controversial Garda conversation tape[1]. In one exchange on the tape a Garda talked of being questioned over the way to take down a protester. “How did you train to bring someone down? In a harness with ropes. We didn’t have any of them options today there . . . That’s all I’m saying”. While the Sergeant on the tape said “At the end of the day, we have a certain duty of care to them. We ask them to get down, if they don’t get down, we tell them we are taking them down forcefully. We take them down forcefully.
“We use whatever means at our disposal, which includes ladders and ropes or whatever to get them down safely. If one of them slips, so fuckin.... What can we do?”
Another worrying aspect of the policing yesterday was that one of the Gardaí involved in taking down both of the campaigners from the tractor and the borehole rig, was a Garda against whom 2 separate allegations have been made of making sexually abusive comments to Corrib campaigners[2].

Also while in custody in Belmullet Garda station, the only male of the four campaigners arrested was assaulted and received a punch in the ribs after he declined to consent to having his photograph taken. All people arrested were subsequently released without charge.

Shell to Sea spokesperson Terence Conway stated “It's a disgrace that Gardaí, whose colleagues are currently under investigation for joking about raping protesters, are cable-tying the legs of protesters up on top of tractor cabs. All the calls for independent investigation have been ignored and it seems the Gardaí are continuing with their use of violence and a total disregard for heath and safety.”

Shell to Sea spokesperson Maura Harrington: “It's sinister to note the use of cable-ties by the police on the day that we had read about the same practice by US Seals in Pakistan”.

[1]‘Give me your name and address or I’ll rape you’: the reality of Corrib policing -

http://www.indymedia.ie/article/99445
[2] Audio from one of these situations is available here: