Calais No Borders: stepping up the struggle

A busy month on the border watch as activists release "Videos of Shame" to spotlight police repression; the cops hit back with more violence; ... and the struggle continues. 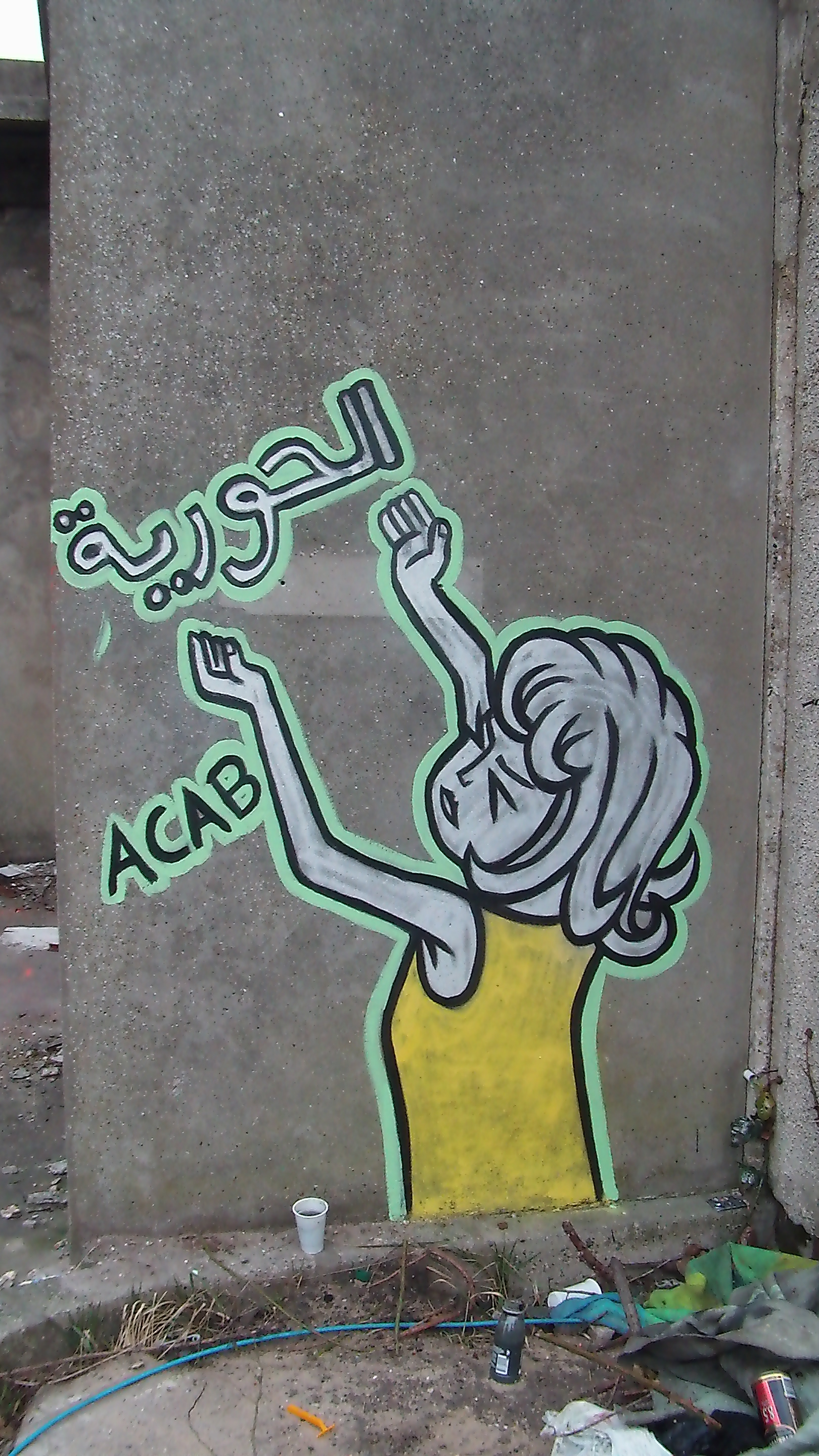 The last few weeks have seen a stepping-up of the struggle in Calais, after No Borders activists released video footage of police raids and harassment to French national media on 10 April (^1). With TV and radio attention turned on Calais, migrants got a breath of calm as the border police (PAF: Police Aux Frontieres) seemed to take a week off. But they were soon back with a vengeance with a major raid on 21 April which led to over two dozen arrests, including three No Borders activists who were brutally arrested and now face serious charges.

One video, which received thousands of online views in a few hours, showed border police driving into Africa House (the deserted factory complex lived in by around 100 Sudanese, Eritrean, Afghan and other migrants) in the early hours, dancing and joking as they blasted loud African music from squad cars with lights flashing.(^2) ) Other footage showed police hitting activists and smashing cameras, as well as sexual harassment. But these videos really indicate just the tip of the iceberg of the systematic repression taking place in Calais. Many of the worst incidents of police violence against migrants are unlikely to ever be captured on film. Nor can a few video clips make clear the crushing reality of this harassment that goes on every day and every night: constant and repeated ID controls, arrests, raids, beatings, destruction of shelters and possessions, contamination of food and water, and acts of humiliation and psychological warfare. All as part of a deliberate policy agreed by the French and UK governments to "clear" undesirables from the border zone by making life unlivable.

No Borders have been living and working alongside migrants in Calais since the June 2009 No Border camp, and an important part of their work during this time has been filming, monitoring, and documenting police raids and attacks. Activists have collected maybe hundreds of hours of film, as well as photographs, written testimonies and more evidence. There are plenty more "videos of shame" which could be published in future. At this moment activists are in discussions with lawyers about the best approach to take with presenting this evidence, perhaps as part of a legal challenge against the French state.

Africa House, currently the largest migrant settlement in Calais, is attacked by police pretty much every day, sometimes numerous times in the same day or night. So having a whole ten days off from raids was a real material benefit to residents. CRS riot police did make a small incursion at the back of the squatted complex on the morning of the 13th: but when they found out a Radio France journalist was on patrol with No Borders that morning they soon scurried off, even releasing one migrant without papers whom they had been about to detain. The recent French press coverage has been overwhelmingly positive (a surprise for English activists used to the anti-migration rants of the Daily Mail et al.), not only spotlighting the activity of the cops but giving migrants a rare chance to tell their own stories on national media. Such as one Darfuri friend who told how: "I left my country because of war, expecting to find freedom in Europe, and instead I have found another war."(^3)

Of course the holiday didn't last long. On 21 April Africa House was raided by five vanloads of CRS riot cops as well as a number of PAF border police, who attacked the building simultaneously from both sides at just after 9 am. More than 20 people without papers were arrested. But in this case the violence was mainly directed at the No Borders activists on the scene -- particularly those carrying cameras. Activists were brutally grabbed, dragged on the ground, manhandled and injured. One camera was smashed, another taken and its memory card stolen. Four activists were arrested and held in custody for nine hours. Three of them now face trial on 12 July for charges including "violent resistance in a group" and
"illegal occupation". The former charge is similar to something like "violent disorder" in the UK.

Despite regular No Borders interventions in police raids, if the trial does go ahead it will be one of only a few times the authorities have tried to prosecute activists for serious offences following a squat raid. Such charges have often been threatened, but rarely reached court, perhaps because the police have more to lose themselves from such a trial. Many of these raids, and certainly much standard police conduct during them, are likely to themselves be illegal. With two years' worth of evidence to make the point, a high profile court case around an Africa House raid could seriously backfire on the "forces of order".

As one No Border activist commented in a press statement last week: "this trial is no more than a manipulation strategy to try and destroy the image of No Borders, and above all to try and scare us and discourage us from continuing to film and expose the reality of Calais and of its repressive system. We are not afraid: we are ready to go to the courts and seize the opportunity to win this latest political trial." (^4)

As well as this new trial, two other No Borders activists are currently facing charges of "outrage" (insulting a police officer) and assault on a police officer, from separate incidents. These comrades also need solidarity and support, particularly if there are fines to pay.

Meanwhile, with or without media attention and coutroom battles, the struggle in Calais continues. Whether it's direct action against the border, or simple acts of everyday solidarity such as sharing a cup of sweet tea by the campfire, the No Borders presence in Calais is getting stronger. As our numbers and networks grow, so do our skills and experience, and we become ready to face new challenges and take new steps to move our struggle forwards. New hands, eyes and minds are always welcome: come and join the resistance.