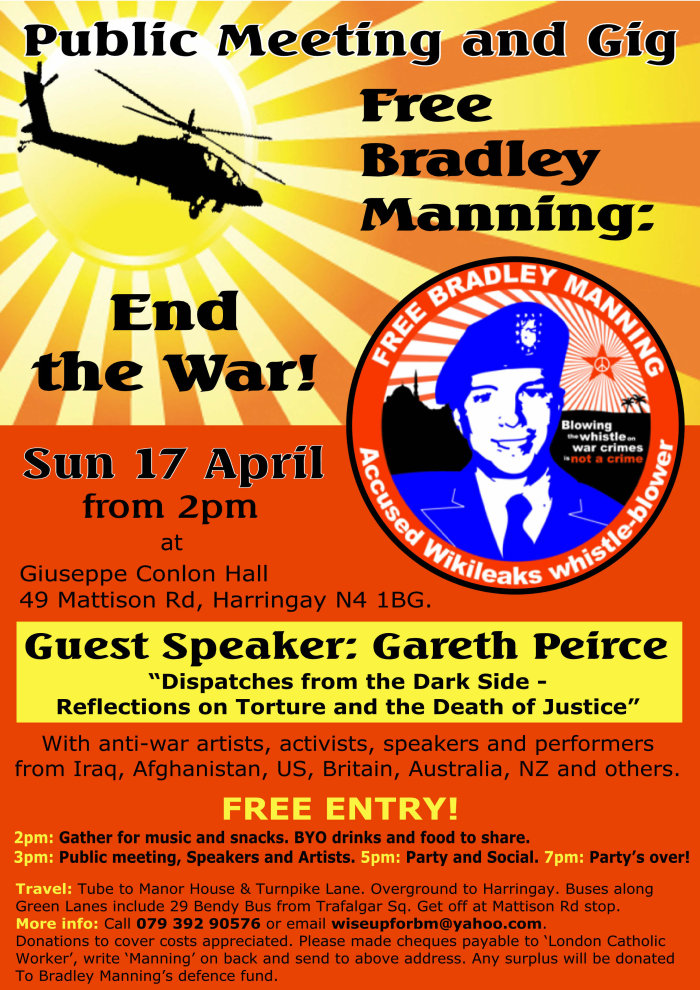 
***PLEASE FORWARD TO ANYONE YOU THINK MAYBE INTERESED
Bradley's in Quantico for Us!, We're on the Loose for Him!

GUEST SPEAKER
Gareth Peirce
"Dispatches fom the Dark Side: Reflections on Torture and the Death of Justice"

* Also, anti-war artists and activists from countries entrenched in war on the people of Iraq and Afghanistan. Speakers & performers from U.S., Britain, Australia, Ireland, New Zealand and others

- 3pm Public Meeting Speakers and Artists in the Venue of Giuseppe Conlon Centre, enter directly thorugh doors off the street.

- 5 pm Party/ Music Session with Bow Street Ramblers and others, social back in the Hall of Giuseppe Conlon Centre, enter through alley between building and house

...*BYO drinx and some food to share.
(Off licenses & shops on nearby Green Lanes)

* Carmen Trotta has lived and worked 20+ years at New York Catholic Worker USA,
CW & War Resisters League writer and organiser. Also a key organiser of the solidarity scene around the 3 Pit Stop Poughshares trials in Dublin, "Witness Against Torture" walk through Cuba to Guanatanamo and annual nonviolent resistance at the U.S. Supreme Court on the anniversary of the opening of Gitmo. On 911 he saw the second tower of the NYC World Trade Centre drop from the top of the nearby WRL building.
Sings Elvis, Johnny Cash, Phil Ochs CW & WRL speaker and organsier

* Joe Black from Dublin
his original songs include "The Welcome", "Giuseppe Conlon"