The immense social power of the American working class has largely lain dormant since the 1980s, when President Reagan crushed the PATCO air traffic controllers amongst others in struggle. The leadership of the AFL-CIO union has brokered deal after deal in favour of the capitalist class in the intervening years, leaving many workers disillusioned and demoralised. Now - compelled by the social crisis and inspired by the Arabic pro-democracy revolutionaries - the sleeping beauty is awakening. 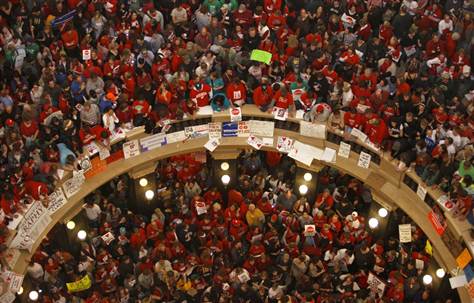 The scene at the occupied state Capitol

Over the last few days, protesters in Wisconsin have responded to Governor Scott Walker's attack on public sector workers by assembling in their tens of thousands at Madison, the state's capital city. Walker is trying to push through a bill which would severely limit workers' power of collective bargaining, as well as effectively cutting their pay by between 8 and 20%, dependent on occupation.

Infuriated at finding themselves one fifth poorer than they were, thousands of teachers have taken part in mass 'sick-ins' - wildcat strikes by another name - that have shut down public schools in Madison and surrounding areas. Teachers and students have joined the demonstration at the state Capitol, while rallies have been held on college campuses. At a rally of hundreds at the University of Wisconsin-Superior, History professor Joel Sipress told the crowd:

"We all know that this is part of a broader assault on the ability of working people in this state and this country to have decent, humane lives. The same people who want to strip public workers of their rights - they’re the same people who want to say to all of us ‘it is a sink-or-swim society.’ We will not allow Wisconsin to become a state where the working people live off the scraps that are thrown to them by the economic elite."

President Barack Obama's latest change you can believe in is to cut $1 trillion in federal spending on social programmes, a very similar amount to the initial banker bailout he supported as a presidential candidate. At a state level, many budgets are facing the squeeze, and Governor Walker's counterparts in North Carolina and Michigan, plus New York's 'independent' billionaire Mayor Bloomberg have also announced savage anti-working class measures over the last week.

It is just a week since western ally and dictator Hosni Mubarak was driven from power by the Egyptian masses, an example now being followed in Bahrain, Libya and even Iraq. The impact of this revolutionary upsurge has not been lost on the Wisconsinite demonstrators, who have made their own Cairo-style protest camp in and around the Capitol, and have made placards bearing slogans such as like 'Walk like an Egyptian" and "Mubarak For Governor".

The comparison between the US-backed elites of the Arab world and the elite political class in the US itself is a sound one. Though the states face large deficits, they could be paid off by taking ten per cent of the wealth controlled by the richest four hundred Americans.

Though it is extremely early days for this new international working class movement, it is now abundantly clear that it is not "the end of history", as ruling class philosophers had hoped after the fall of the Berlin Wall. History is being made right now.