A bloc for every occasion

The book bloc at student protests was one of the highlights for me, seeing the police batons raining down on a massive edition of Aldous Huxley’s Brave New World was a brilliant example of the refreshing injection of creativity that the students have brought to the new radical landscape. 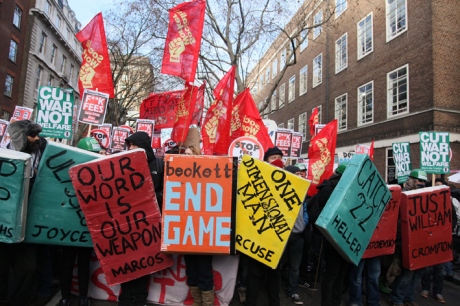 There has been widespread requests that the Wombles (White Overalls Movement Building Libertarian Effective Struggles) should “return” but what people don’t realise is that they aren’t an organisation Wombles are a tactic in the same way that Fitwatch isn’t a group its a tactic to prevent police gathering intelligence on protesters.

The best sort of movement is one that uses a variety of tactics to reach its aims, nothing should be discounted and all ideas considered. I always find that people will naturally gravitate to whatever tactics they feel comfortable doing and this is how it should be.

Communication between blocs is vital and tactical approaches should always be considerate of each other, e.g. The black bloc and pacifist blocs should co-ordinate as not to interfere or put at risk protesters.

“Be excellent to each other.” - Bill and Teds Excellent Adventure

Accept that other people fight for different reasons, we all come from different backgrounds and have diverse views, we fight our own struggles, you may not understand why people are attacking the police or property but this is not the time for condemnation. Who are we to tell people how they protest or fight?

If you don’t agree with the black bloc don’t associate with them, simple.

Don’t expect things to happen without your input and organisation, make it happen organise with your friends, forge relationships with other resistance movements and groups, solidarity is the key.

New kids on the bloc

A bloc is simply a group of like minded individuals, they usually are defined by the tactics which they employ in a protest situation, there have been many different types of bloc over the years, from Black (usually more up for fighting the police) blocs, white (usually non-violent) blocs, pink blocs, medic blocs, clown army, wombles, workers blocs, womens blocs and immigrant blocs the list goes on and on!

Be creative, accept you are part of a diverse movement and solidarity means not speaking out against other activists just because their tactics differ from yours.

Burn after reading, or before, translate and disseminate without restraint.