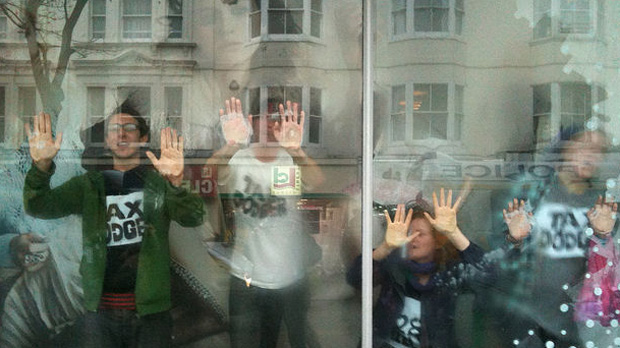 A more eloquent and informed group of demonstrators would be hard to come across and one is struck by the wide appeal across ages and incomes, of what they had to say. -- Alex Thomson, Chief Correspondent, Channel 4 News

What do Topshop (Sir Philip Green Arcadia Group), Vodafone, SABMiller (brewers of Grolsch), Boots, Barclays and now Cadbury's all have in common? They all dodge their taxes.

The first Saturday of December, one of the busiest Christmas shopping days of the year, it was the turn of Topshop (part of the Arcadia Group of Sir Philip Green's empire) to be shut down. The Arcadia Group includes Topshop, Burton, Dorothy Perkins, Evans and Miss Selfridge.

Sir Philip Green, billionaire boss of Arcadia, who owns Topshop, Dorothy Perkins and Miss Selfridge among others. Arcadia is owned by Taveta Investments Limited, which is registered to an office on the tax-haven island of Jersey. Taveta Investments is owned by Green’s family members living in Monaco, where income tax is 0%. It’s estimated Green avoided paying £285million in tax in 2005 alone.

In the Oxford Sreet store in London security thugs assaulted protesters. As these assaults were witnessed by several people, including the police, I trust charges for assault wil be brought and that the local authority withdraws their registration to work as security guards.

Charges for assault should also be brought against the clearly identified thugs in police uniform who attacked a female. There should be no place for thugs like this in any police force.

But well done the police who did the protesters job for them and shut down Topshop stores.

And the mainsteam media? To their credit, the Mail Online had excellent coverage, but from the BBC a deathly silence during the day. No mention on the BBC Radio 4 lunchtime news, but did manage to mention that a bicycle thief had been apprehended through a trail he left in the snow! What then of their flagship PM news slot at 5pm? Er nothing. Out of a half hour prime early evening news, almost 15 minutes on Spanish air traffic controllers strikes (and poor stranded Brits suffereing) and tut tut corrupt Fifa not awarding World Cup football to England, several minutes on Oprah Winfrey taking her show to Sydney in Australia, several minustes on Asil Nadir allegedly breaching his bail conditions, a few second mention of climate protesters on the streets of London (blink and you would have missed it) but absolutely zilch on concerned citizens shutting down Topshop stores and the scandal of tax avoidance by the likes of Sir Philip Green and the implications it has for all of us in loss of public services. There was coverage on the BBC Radio 4 6pm news and midnight news but nothing on the main 10pm news. Brilliant coverage by Channel 4 News which once again puts BBC News to shame.

If you could not make it or there was not a protest near you there is still a lot you can do. Go into Topshop and slip a few leaflets into pockets, stick up a few posters in the changing rooms, re-arrange the clothes on the racks, take your purchases to the checkout, offer to pay when Sir Philip Green pays his taxes. But best of all, boycott Topshop!

Every weekend until Christmas?

Sir Philip Green says he is doing nothing wrong, nothing illegal. Slave owners used to say something similar!

Why cuts are the wrong cure

The day the teenagers turned on Topshop

Anti-cuts day of action in Nottingham