Video and photo report from the Tory Party Conference protest

On Sunday 3rd October, around 6000 people gathered to protest against the cuts planned by the Tory government at their party conference in Birmingham. The entire area around the ICC (International Convention Centre) became an exclusion zone with 15ft high metal barriers erected. West Midlands police had originally agreed that the march organised by the Right to Work campaign could go ahead, but soon reneged on their promise. On the day the march was of a standard A to B affair: colourful banners, a variety of blocs from different unions, but it took a ramshackle route through Birmingham city centre's side streets, resembling a tour of the 'city living' upmarket apartments more than a visible and vocal protest march. It was obvious to all present that political manoeuvring had taken place to minimise the political efficacy and visibility of the march. This was not helped by the Right to Work campaign stewards 'liaising' with West Midlands police to compromise protesters who identified themselves as anarchists. Chris Banbury, an SWP member and RTW steward allegedly threatened protesters holding a banner with 'arrest' if they did not move from the front of the march. 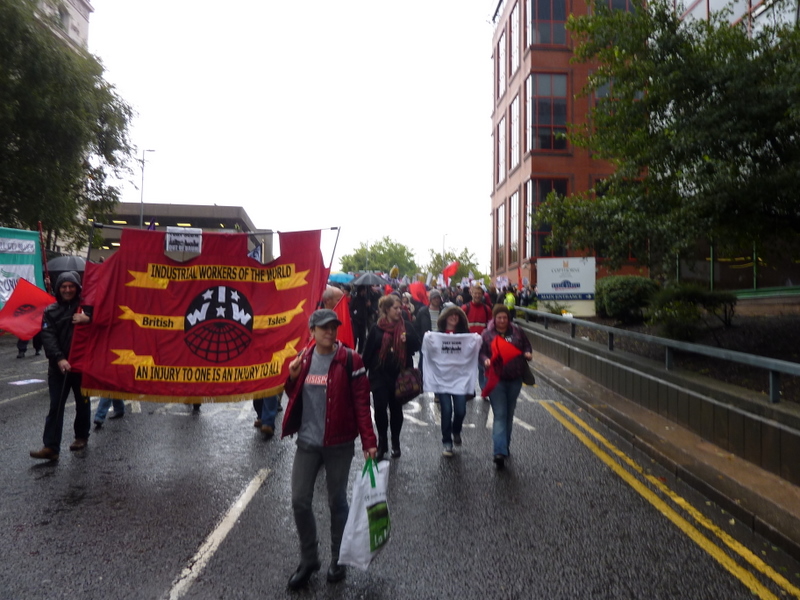 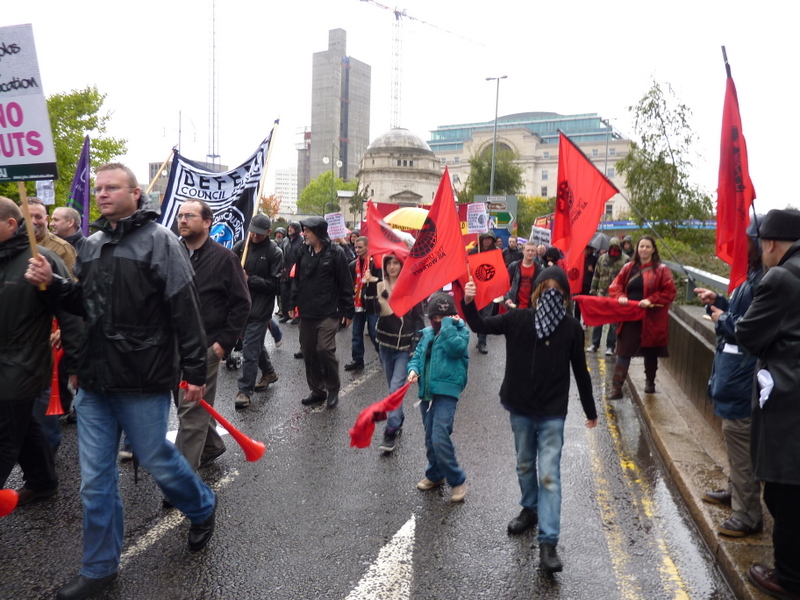 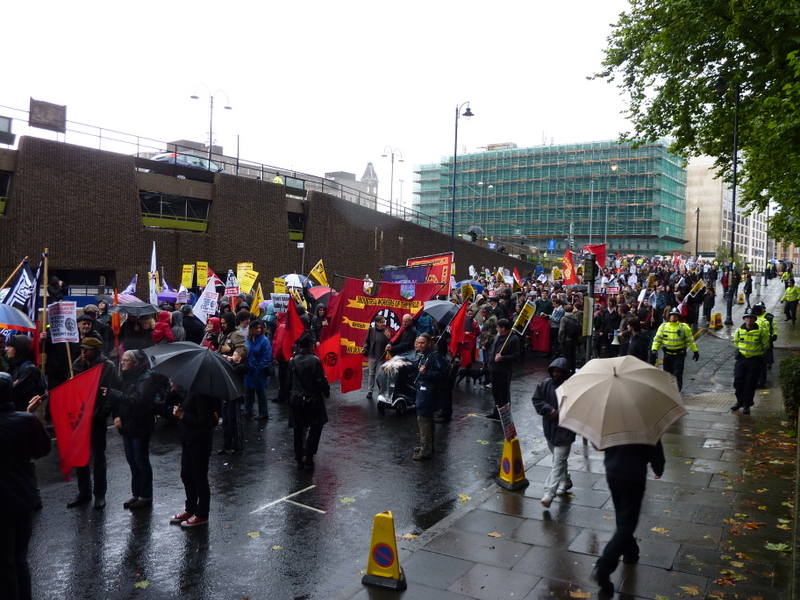 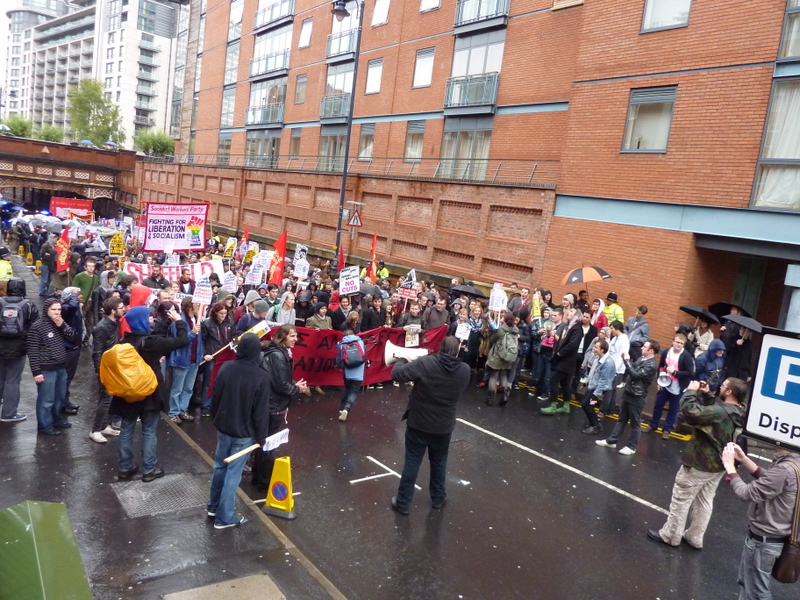 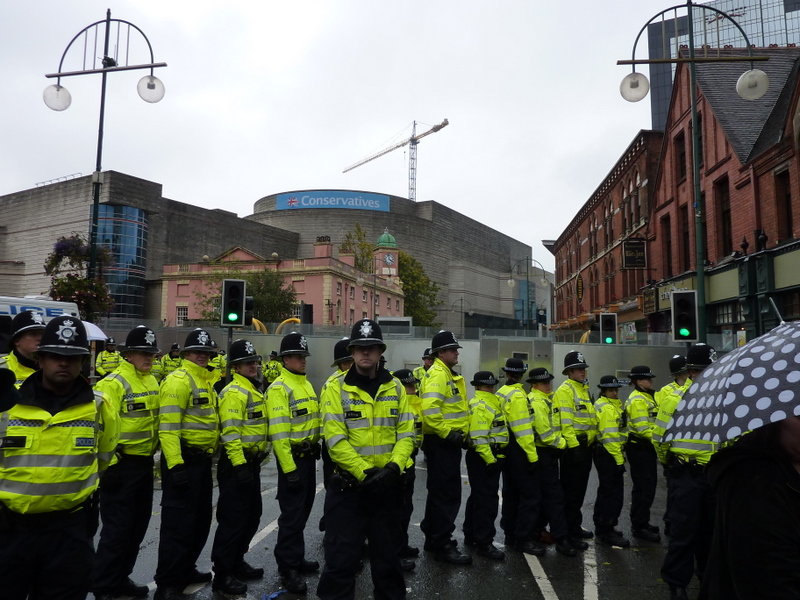 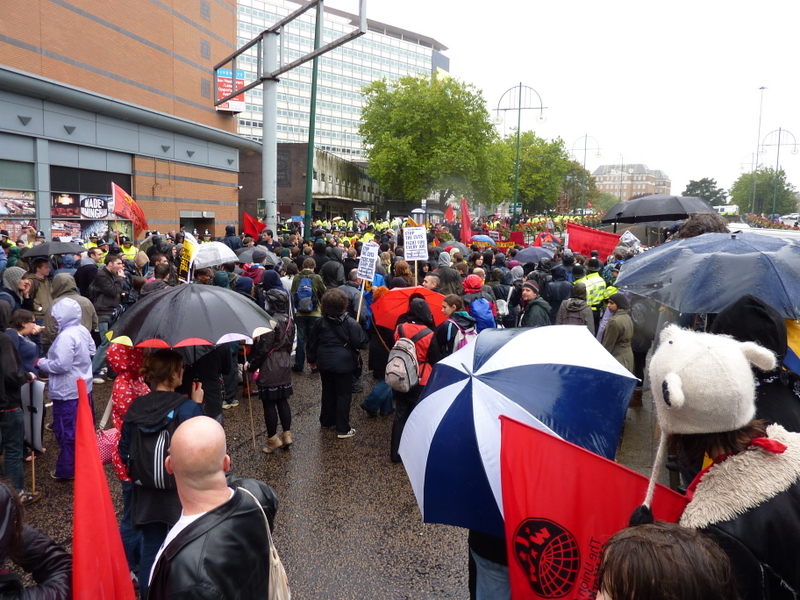 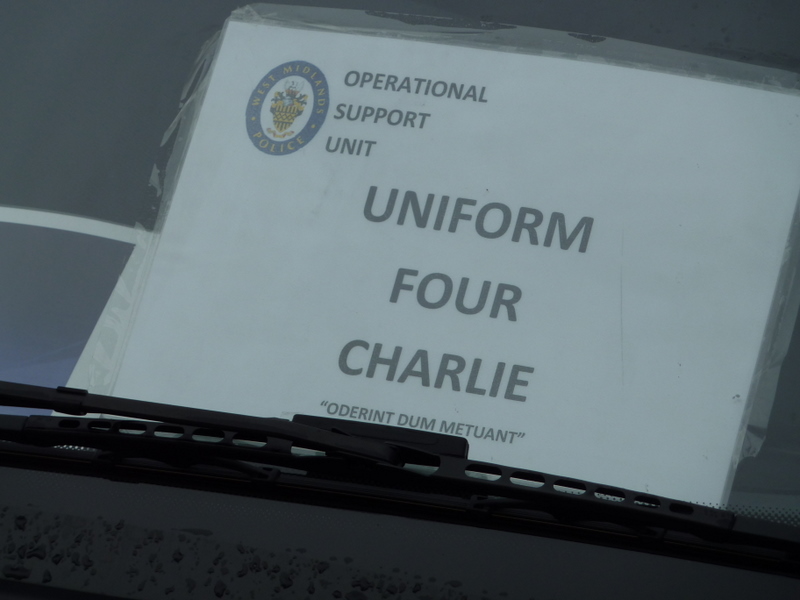 "Let them hate so long as they fear" - Caligua, or West Midlands police even 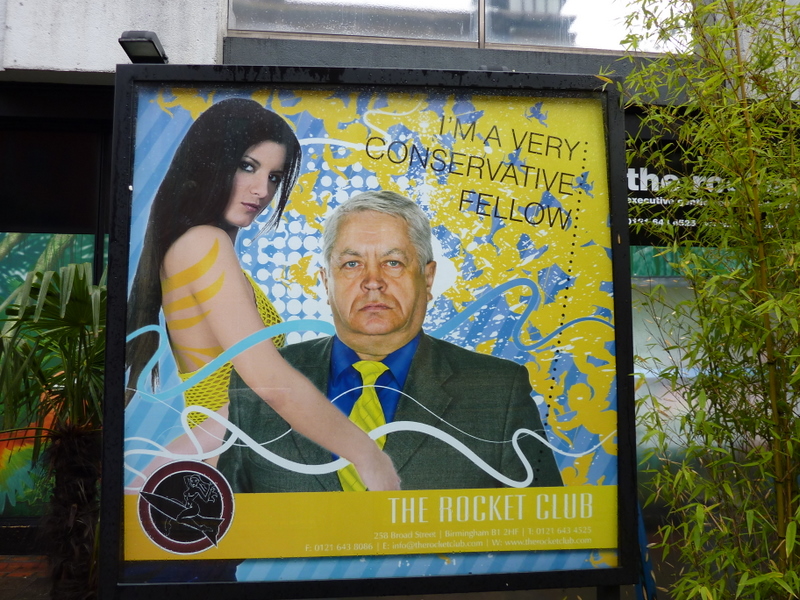 Only a higher class allowed in here

Just outside the exclusion zone on Broad Street, and near the ICC took place the compulsory "2 minute hate", albeit this time with more noise and flares rather than protesters grumbling and slowly filing past, as happened at the Labour party conference a few years back in Manchester. Apparently the anarchist bloc had attempted to break off from the main march down a side street, but were unable to due to a large police presence. Just before the Five Ways roundabout the anarchist bloc were picked off by West Midlands police 'operational support unit' and kettled. More radical members of the protest, mostly members of the IWW industrial union protested at their detainment with chants of "let them go", and mobilised other passing protesters. Police dog units were used to attack anyone objecting to the detainment, and a number of police vehicles moved in to the tail end of the march to prevent others returning to show solidarity. Meanwhile, the police operational support unit moved the anarchist bloc to the other side of the Five Ways roundabout, away from the eyes of the gathering crowd. Witnesses stated that there was at least one unnecessary episode of aggression from the police, violently arresting a member of the bloc, which of course angered those witnessing the unfolding events. Questions were also raised about what Doug Morgan (assistant secretary of Birmingham NUT) was discussing with police whilst the anarchist bloc were kettled and being searched by the West Midlands police public order unit. Presumably the police were attempting to find evidence to justify their expensive operation (and overtime), and were busy photographing and taking the names of protesters which would have made it difficult for them to participate in fringe event actions over the following days.

Whilst I was filming police officers surrounding the bloc, I noticed the Latin phrase "ODERINT DUM METUANT" printed on a laminated sheet of paper fixed to the inside of the windscreen of the police carrier van. This sheet identified this particular police operational support unit (U4C) who had kettled and detained the anarchist bloc. This Latin phrase is attributed to Caligula, the brutal Roman emperor and translates as "Let them hate so long as they fear". This led me to wonder why they would choose such a provocative emblematic phrase to represent their public order police unit, particularly one which places them squarely and ominously in opposition to the general public they are supposedly here to protect. I also wondered whether those who chose that emblem were aware that Caligua also caused a massive financial crisis, and proceeded to ask the public to lend the state money, before levying unprecedented levels of taxation.

On the way back from town, I passed 'the Rocket Club', a strip joint on Broad Street, and noticed that they had got their market research down to a tee. Their latest advert features a blue-shirted, grey-haired, middle-aged white male stating: "I'm a very conservative fellow" whilst having a lap dancer place her hand in the general direction of his nuts. Clearly they only allow a higher class of gentlemen enter their establishment, or were perhaps just busy cashing in on Birmingham's least wanted visitors.