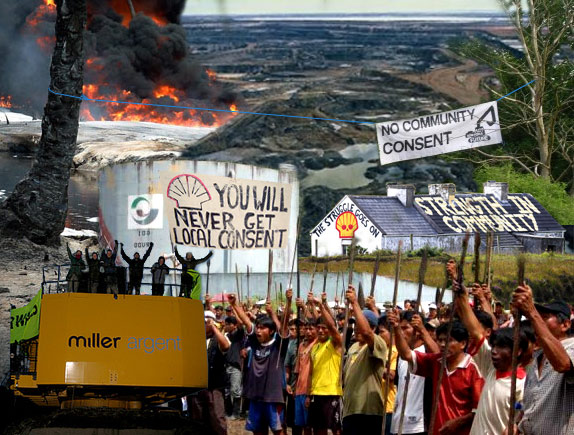 30 cyclists from the UK will join the “Madrid to Mayo” cycle ride in Cork, and many others from Ireland are expected to join on route. We will spend ten days traveling up the west coast of Ireland, distributing a specially produced newspaper, “Changing Times”. Events are being held along the way, each night we're being hosted by different community organisations, and we'll arrive in Mayo for the Rossport Solidarity Camp June Bank Holiday Weekend Gathering at Glengad.

It's gonna be a good laugh, but hopefully more than that - the line we are drawing from Merthyr to Mayo is a reminder that none of us can afford to see these places in isolation.

The ride begins today with an event in Merthyr Tydfil where local residents and the solidarity cyclists are sharing stories, ideas, music and food.

“Our communities’ stories are repeated across the globe in the places where fossil fuels are sourced. Large corporations move into areas regardless of the wishes of the affected population; resources are extracted and, whilst the corporations reap vast profits, the local people have to suffer the health and environmental consequences. And, as the fossil fuels are burnt they contribute to climate change, affecting everyone.” - Merthyr resident, Alyson Austin.

Both communities have a long history of resistance, and their efforts have resulted in amazing successes. In Erris, Mayo, the campaign won a sizeable victory in November last year, when Shell’s application for their onshore gas pipeline was effectively refused by the planning authorities; it is unclear when (or if) permission will be granted in the future. In Merthyr Tydfil, campaigners are currently taking out a Group Private Nuisance case against the mining company, Miller Argent. Significant numbers of local people are participating in the legal action which aims to limit the mine’s impact on residents. Climate activists recently did a solidarity action by blockading coal trains headed from the mine to Aberthaw Power Station. In recent months, Mayo has seen string of actions locally, nationally and internationally in solidarity with political prisoners Pat O'Donnell and Niall Harnett (more information on the prisoners and how to write to them, and the campaign in general, on the shell to sea website.)

Please join us on the ride, for the gathering, and in continued resistance against patriarchal white-supremacist capitalist imperialism, and the fight for social and ecological justice!