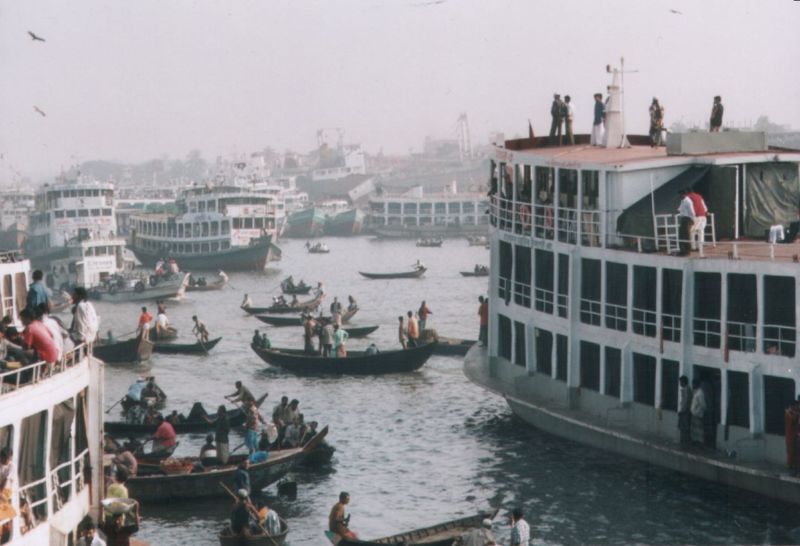 Friday 7th May; at one minute past midnight 150,000 boat workers began an indefinite strike. The inland waterways of Bangladesh - a vast complex of rivers and canals - comprise an essential part of the country's transport network, handling 30% of cargoes and 15% of passengers with a great variety of rowing boats, trawlers, steamers and triple deck launches plying the routes. The strike was called by the Bangladesh River Vessel Workers’ Federation (an alliance of six trade unions). Three small unions, at least one affiliated to the ruling Awami League party, accepted the wage offer and are scabbing on the strike.

Trouble has been brewing in the industry for a while. The workers have not had a raise since 2004, and, as inflation eats further into wages, repeated wage demands have been ignored and promises broken. In 2008 a 3-day strike secured the river workers a promise from the government and boat owners of a pay review within 3 months - it never happened. An indefinite strike was called off in March this year after an agreement that "a uniform pay scale for all workers based on national pay scale-2009 will be announced and implemented by April 30." Again, no delivery. The demand was for a minimum wage increase from Taka.2850 to Tk. 5000 (about £50/$73/EU58). Now a government-organised pay review board has recommended a rise far below what the workers demanded. Besides increase in wages, workers’ have a 22-point list of demands that include "stepping up of security in the waterways to stop extortion and robbery, restoring navigability of the rivers and canals by regular dredging, and checking corruption in the shipping department".

As the strike spread on Friday to the two main southern seaports at Chittagong and Mongla , the Awami League Shipping Minister Shahjahan Khan (himself a former union leader) declared the strike "illogical, unlawful and politically motivated"..."They [workers] called the strike to put the government in an awkward situation." This is a typical response to strikes in Bangladesh, trying to deny all conscious agency to workers to decide to fight for their interests and claiming they must be manipulated by political rivals of the government. It is ironic for the politicians to judge the genuine class struggles of workers by their own low standards; when in fact it's the political parties that commonly try to reduce workers' strikes to mere tools for pursuing their own political rivalries.

Party leaders and activists, joined by cops and scabs from the Awami League-affiliated Jahaji Shramik Federation, went to ports across the country to threaten workers. A small number were forced to take out vessels under threat of arrest; others were attacked, as was a strikers' march. In Dhaka workers were temporarily held hostage by cops and scabs in an attempt to sabotage the strike. In the following days union leaders and activists have been arrested and kept in custody.

But the strike remains strong; only small numbers of passenger vessels are moving and massive ship cargoes remain unloaded at ports across the country. Workers have insisted they will continue with the strike until their demands are met. Strikers have also used sabotage;

A navy team, meanwhile, started repairing a fuel ship of the Bangladesh Petroleum Corporation, which was damaged by the strikers at Godnail of Siddirganj in Narayanganj. (New Age - 14th May 2010)

Navy personnel and coastguards are now guarding oil tankers at the main southern seaport of Chittagong.

On Wednesday 12th some flights were cancelled at Dhaka airport due to fuel shortages. At Chittagong 25 container ships are queued up and idle, waiting to be unloaded. With some foreign ships and planes stranded in the country, on Thursday a joint army and navy contingent was deployed to unload jet fuel from a moored tanker and transport it to airport supply depots. In Chittagong 50 tanker lorries were moving more fuel to resolve the crisis.

The same day the Shipping Minister issued an ultimatum to strikers; "If the workers don't join work by the deadline, stern legal actions will be taken against them including cancellation of their work licences". The state Minister for Labour and Employment Monnujan Sufian (also a former trade unionist) described the strike as "illegal".

‘The workers, including the masters, sukanis and lashkars would lose their jobs unless they resume work by 5 PM Thursday, warned the shipping minister.
‘Their licences will be cancelled,’ he said. (New Age - 13th May)

It is ironic that the strikers have been warned that their work licences - certificates of competency - would be cancelled or suspended. In their efforts to break the strike, the state and the bosses are happy to break the law and endanger lives of passengers and crew by sailing without trained personnel;

‘Sundarban launch owner Saidur Rahman Rintu, also vice-president of the Barisal Launch Owners’ Association, in the afternoon said, ‘We have been forced to run the launches without licensed crew.’ (New Age - 15 May)

At Dhaka, three triple-decker launches were reported as sailing, but with an unqualified press-ganged crew;

None of the launches had any licensed crew on board.
The crew found on board said they were "forced" to run the vessels with the help of BIWTC pilots as the licensed crew of the vessel had abstained from work since the beginning of the strike. (The Independent - 15 May)

The state repression has continued; strikers' marches have been attacked, union leaders and activists have had their homes raided, been arrested and jailed and many are now in hiding. But the workers are not giving way;

Strikers at a rally at Banglabazar in Dhaka on Thursday afternoon said the minister would not be able to foil the strike with threats. They said they would continue with the strike until their demands would be met.(New Age - 14th May)

As the workers ignored the "ultimatum" the government had to extend it to 5pm Friday. This too was ignored, and with the strike still strong, it has been further extended to Saturday 16th. The River Vessel Workers’ Federation have said ‘Workers will not call off the strike until their demands are met and the arrested federation leaders, including its acting president Shah Alam, are set free.’ (New Age - 14th May 2010)

One can expect that continuation of the strike will soon create shortages of food, fuels and industrial raw materials. It will also hit hard the export-orientated garment sector, the country's main industry; the garment factories and their buyers depend on fast turnaround delivery times on its orders and transport most of its produce by sea. With business losses running into millions of dollars and limited movement on the water, the strikers appear to remain in a strong position.