Demo against sacking of cleaner and organiser Alberto Durango and to show UBS the fight has only begun. The bigger the turnout the greater the confidence cleaners will have fighting some of the most powerful banks in the world for a living wage, contracts and trade union rights. 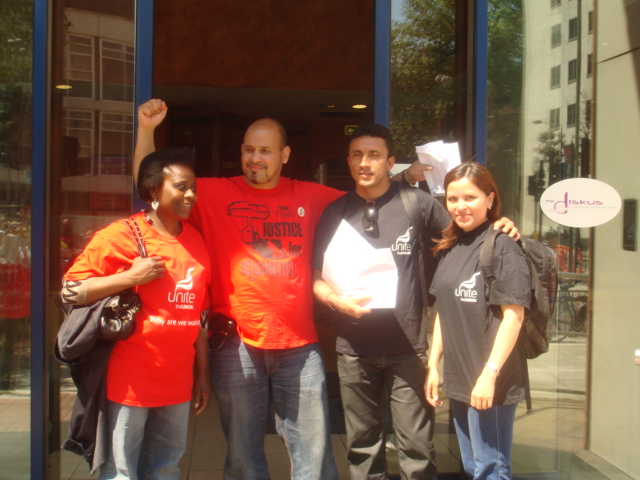 The demo will take place from 5pm on the 23rd at 100 Liverpool Street, London: go to the McDonalds above the Tube entrance in the station for 4.30pm. It follows the 19th March international day of action which saw lively protests outside UBS sites around the world. Migrant cleaners are refusing to accept attacks on their conditions from this massively wealthy bank, and need the solidarity of the whole movement.

Migration and antiracist activists, being the start of a fight against the superexploitation of workers screwed over on the basis of their nationality and status.

Feminists, being a fight against the belittling of ‘women's work' and an industry made up mainly of women workers.

East London activists and residents, being the biggest grass roots industrial struggle about to kick off on our doorstep.

Anticapitalists, being the most direct threat to the city's banks this side of legality.

Trade Unionists, being the forefront of low-paid workers' struggle.