Frontex, Acpo and the policing of Fortress Europe

On 23rd March 2010, No Borders activists disrupted a high-profile conference about 'policing the borders' that brought together Frontex, the UK Border Agency and senior police officers from various UK police forces [press release | video]. In their shock and dismay, some of the highly esteemed delegates left behind their welcome packs as they rushed out of the conference hall one after the other.

Here we reproduce the programme, the list of delegates and their bios, and two of the main presentations that were included in the welcome packs, one by Frontex and the other by ACPO. 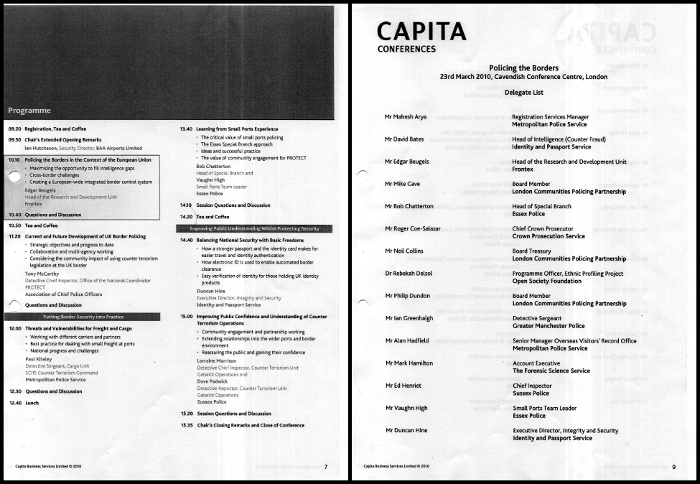 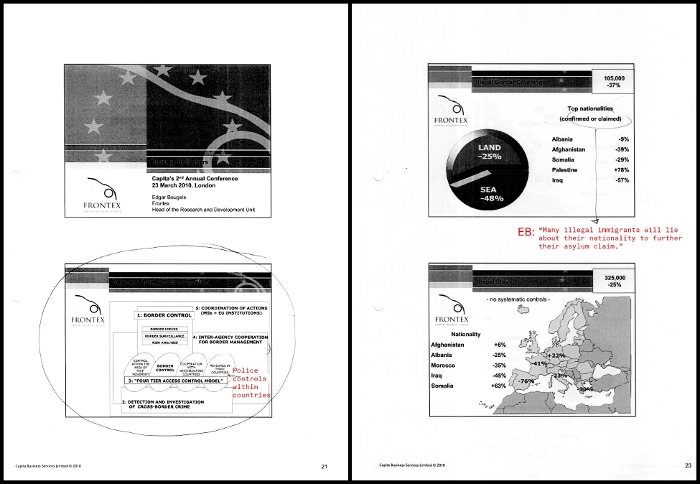 pages from the Frontex presentation 1 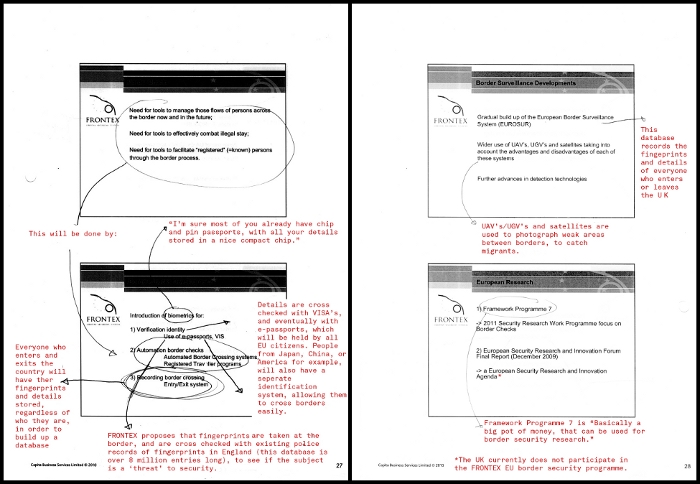 pages from the Frontex presentation 2 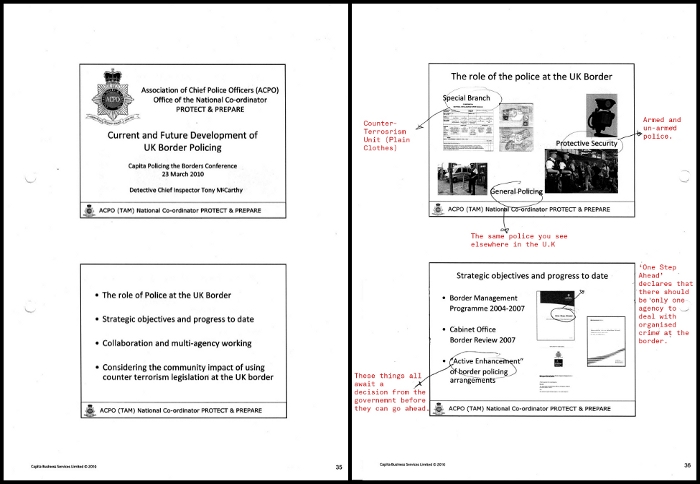 pages from the Acpo presentation 1 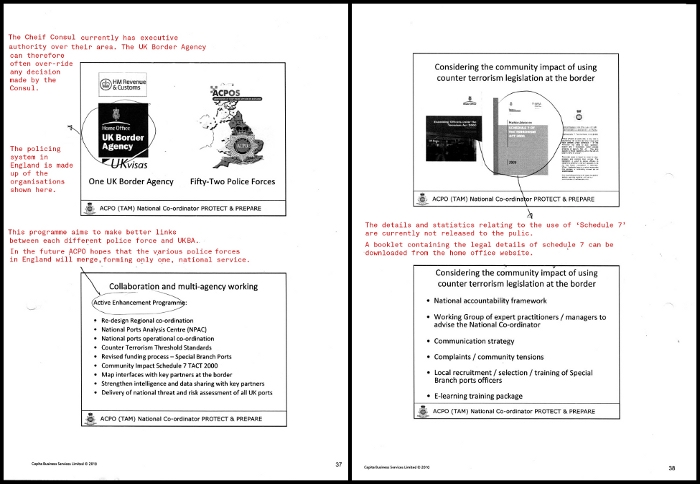 pages from the Acpo presentation 2

- The conference was organised by Capita Conferences, a UK company that specialises in organising policy forums and conferences that bring together policy makers (local authorities, government agencies, police forces, etc.) and private or semi-private bodies that use these 'networking opportunities' to influence policy makers and build 'partnerships' with them. Capita Conferences is part of Capita Plc, which describes itself as the UK's leading business process outsourcing (BPO) and professional services company.

- Following the action, Capita Conferences wrote to all delegates apologising for the "disturbance" at the conference and claiming that, "in our 20 years of experience in producing and running conferences, we have never had our events interrupted because of an illegal protest." Well, guess that will change from now on - although the letter promised that Capita will be "reviewing [its] procedures internally to ensure that unauthorised persons do not enter [its] conferences" and that it is currently "talking to [its] venues about security."

- The stated aim of Capita's 2nd annual Policing the Borders conference was to "bring together key stakeholders to discuss the latest challenges, developments and improvements to the UK's extensive border security infrastructure and operations." Delegates included senior police officers from the Association of Chief Police Officers, the Metropolitan Police, Sussex Police and various other police forces, as well as representatives of the European border agency Frontex, the Identity and Passport Service and other UK government bodies (see the list of delegates above). The conference also featured an exhibition about border security and surveillance technology, which included Serco promotional posters.

- The conference was chaired Ian Hutcheson, the security director of BAA Airports Ltd, who is responsible for the 'security strategy' of all BAA business and works directly with many UK and European regulatory and law enforcement agencies concerned with aviation security. The former police officer is also said to be a 'terrorism expert'. BAA is a private company that owns and operates six British airports and several other airports worldwide, making it one of the largest transport companies in the world. It is now owned by ADI Ltd, a consortium led by Grupo Ferrovial that also includes Caisse de depot et placement du Quebec and GIC Special Investments.

- The protagonist of the conference was Edgar Beugels, the head of the Research and Development Unit at Frontex, who gave a presentation on "how to solve cross-border challenges and create an integrated border control system." Beugels, a lawyer by education, has been working for Frontex since its foundation in 2004-5, previously as a security officer and, since 2007, as the head of Research and Development, a unit within the agency's Capacity Building Division. Beugels had worked for the Dutch Immigration and Naturalisation Service (Immigratie- en Naturalisatiedienst, IND) for 15 years, actively participating in the development of border controls and security policy at both national and international levels. From his bio, Beugels seems to be personally an enthusiast of "innovative techniques in the field of border control," such as biometric chips and automated border checks.

- While none of the information included in the Frontex presentation is particularly secret or surprising, it is interesting to see how the agency sells itself to public authorities without the spin and image-polishing that usually accompanies its publicly available material.

The first part of the presentation analyses the state of 'illegal' immigration into the EU. Commenting on the twisted, and probably inaccurate, data he was presenting, Edgar Beugels claimed that "many illegal immigrants will lie about their nationality to further their asylum claim" and that "most illegals cross borders with a forged passport." This is then used to justify the need for better border checks and surveillance. The aim: "External [EU] borders [that are] open for bona fide (in-good-faith) flows of persons and goods, but closed for illicit, illegal activities." In other words, borders are that closed for those with the 'wrong' skin colour, passport or bank account. The 'tools' to 'manage' these flows advocated by Frontex are the introduction of biometrics for identity verification, automated border checks and border crossing databases, as well as the use of military-style unmanned aerial and ground vehicles to monitor external EU borders and 'catch' migrants trying to enter Europe. This is basically Frontex's 'future roadmap' presented at the conference and the money for the research behind it would mainly come from the Seventh Framework Programme for Research and Technological Development, the EU's main instrument for funding research in Europe between 2007 and 2013, which was described by Beugels as "basically, a big pot of money that can be used for border security research." The UK does not currently participate in Frontex's border security programme and one of the aims of the presentation seems to have been convincing UK officials of its importance.

Of course Beugels did not forget, as is the norm these days, to mention the necessity of striking a balance between security and the freedom of the individual. The individual he had in mind, however, seems to be only a white, privileged, law-abiding European citizen. For this is how he concluded his presentation: "Illegal immigrants will always want to come to Europe. It is for this reason that we must continue to work hard at securing the external and internal borders of Europe as best as we can, with a sustainable plan of keeping this security tight in the future." A few minutes before that he had said, "We hope to create a system where it becomes less and less important WHERE you are from, whether it is Africa or Nigeria or Sudan, and more important WHO you are. Do you have a visa? Are you permitted to work? Do you have money to travel? Are you a terrorist threat?"

We leave you with Frontex's new theory of identity but can someone tell this man that Africa is a continent not a country, and that both Nigeria and Sudan are in it, so the use of 'or' here is incorrect and inappropriate!

- The other main presentation was by Tony McCarthy of the Association of Chief Police Officers (ACPO) on "the national strategy for UK border policing." A candidate for ACPO's Terrorism and Allied Matters office since 2006, McCarthy is a senior liaison to the UK Border Agency (UKBA) and the Serious Organised Crime Agency (SECA) for border-related matters and leads on matters concerning Frontex. McCarthy is said to have been instrumental in the establishment of the UKBA and is currently leading on assessing the impact of the use of counter-terrorism legislation at ports and airports, used mostly to stop and search and question wrong-looking suspects, such as Muslims and activists, particularly the use of Schedule 7 of the Terrorism Act 2000, which overrides people's right to silence. ACPO is a private company and not a publicly accountable body.

- The ACPO presentation focuses on the role of police at the UK borders and their 'collaboration' with other agencies. It also considers the impact of counter-terrorism legislation used at ports and airports on 'communities'. ACPO seems keen on merging all police forces and other border agencies into one agency to deal with organised crime at the border (which presumably includes 'illegal' immigration), as well as the "active enhancement" of border policing arrangements (i.e. more powers for the police), both of which "await" the government's approval. The presentation seems to put much emphasis on the role of Special Branch and anti-terrorist legislation in protecting the UK borders against multiple 'threats', including that of 'illegal immigration', particularly the use of Schedule 7 of the Terrorism Act 2000, whose details and statistics are currently withheld from the public. ACPO's efforts to come up with a "national accountability framework" for its use appears to be a cynical attempt to silence criticisms of its draconian powers and misuse.

We leave you also with ACPO's new theories of security, terrorism and community.