The annual Cambridge Strawberry fair has been cancelled for this year, after police appealed the decision by councillors to grant it a licence to run in 2010. 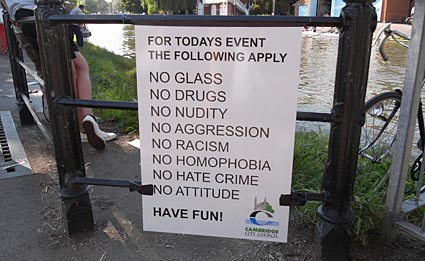 Not enough rules for the cops

As an urban75 report shows, the event has been stringently policed for years. The free fair, which has taken place on Midsummer Common on the first Saturday in June since the early 70's was billed £1 500 for policing of the event last year. This included using dog sniffers to check all rail passengers arriving in Cambridge for drugs, irrespective of whether they were attending the festival or not.

In 2009, the organisers of the Big Green Gathering were forced to cancel the event 36 hours before it was scheduled to start, after threats of an injunction from the council and police. The BGG Company was bankrupted as a result.

The Kingston Green Fair, which ran from 1897, was brought to an end by bad weather in 2008. An attempt to set up a smaller Kingston Green Kids fair was thwarted by the local council citing safety concerns in 2009.